A false narrative is established in which YPG members, sympathizers and even its leading figures are only discussed within a positive and uncritical narrative. 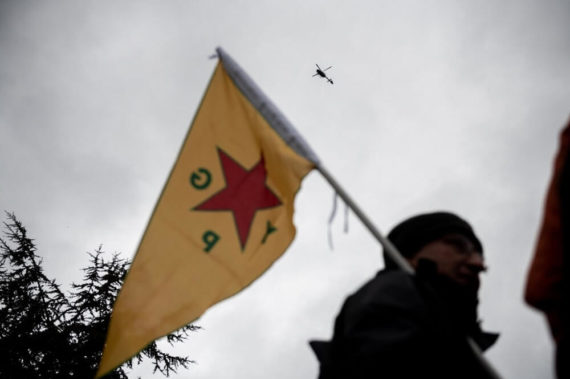 A police helicopter circles over Eberplatz during a demonstration against Turkish operation in Syria on 19 October 2019 (Photograph:Fabian Strauch/picture alliance via Getty Images)

As Turkey launched its Operation Peace Spring, an unfortunate phenomenon has been observed once again among European and German circles. Namely the continuation of a myth about the YPG. This begins with their practice of legitimizing the YPG as the representative of all Kurds – no matter whether they are living in Turkey, Syria or in Germany, and despite the strong evidence to the contrary.

Without taking into consideration the diversity within the Kurdish community, a false narrative is established in which YPG members, sympathizers and even its leading figures are only discussed within a positive and uncritical narrative. This disguises the true face of the PKK and its offshoot, the YPG in Northern Syria. A mistake rooted in both a lack of knowledge and an intention to shape public opinion, observable among politicians, artistic circles, media representatives, journalists and even think-tankers.

Most of the media outlets disregard or do not explicitly mention the fact that the PKK/YPG is officially listed as a terrorist organization by Turkey, EU, and the US. The term used to describe the terrorist organization in the media is the “prohibited Kurdistan Workers’ Party” which implies two incorrect meanings: First, Turkey’s supposed undemocratic political landscape where minority groups are not allowed political representation, and second the alleged legality of the PKK and its supposed leftist credentials. There are thousands of articles which either hide the PKK’s ethno-nationalist, separatist and armed character or mention that it is prohibited in the US, EU and Turkey without ever explaining why. It is by using this kind of language that a positive perception of the terrorist group is generally achieved.

If one focuses on the stances of German politicians and compares their approaches towards Daesh and to the YPG, particularly with the rise of Daesh (ISIS) in Iraq and Syria, it is noticeable that unfortunately one –secular– terror group was preferred in order to fight another terror group Daesh. This is despite the Western world’s powerful militarily superiority. The question is, if both are deemed to be abhorrent terrorist groups why was one of them acceptable, even to become an ally to the US and EU?

It appears the ethnic-separatist, neo-Marxist and totalitarian PKK/YPG is somehow deemed to be a lesser threat to Europeans and the West, who instead classify so called religiously inspired terrorism at the top of their hierarchy of evil.

In addition to the ideologically motivated stance of journalists and politicians with regard to the YPG, the most striking issue is the ambivalent behavior of academics’ and think-tankers’. Not for the first time, experts on the PKK/YPG were seen to disregard their own research on the YPG on television and radio. But why choose to disregard what you know? It would seem the societal, media and political pressure which underpins the YPG myth have led these academics to disregard their research, opinions and analyses regarding this terrorist group.

Academics spoke about the YPG as if it had no relation with the PKK while their own publications openly stress a PKK-YPG relationship. Unfortunately, popularity, professional “reputation”, financial dependence, and current political developments seem to trump academic integrity. Similarly, think-tankers, who are likely responsible to their sponsors have disregarded their own publications and have even made calls to support a terrorist organization.

Nevertheless, at the end of the day, more realist approaches appear to be winning favor. In this context, Germany’s defense minister and leader of the Christian Democrats recently proposed the establishment of an internationally controlled security zone in Syria in cooperation with Turkey and Russia. It is too early to tell whether these delayed proposals will have any effect on the current discourse and myths surrounding the PKK/YPG terrorist organization in Germany, the same applies to whether such moves will be taken seriously at all both domestically and internationally.

Countries such as Russia and Turkey will most likely reject such delayed calls after their history of disregarding previous efforts, particularly of Turkey. It should be remembered that during those times Western states took no responsibility but tried to put themselves in the foreground. Due to this, it seems rather unlikely that Turkey will accept certain states interrupting an ongoing process, particularly since the recent memorandum of understanding was signed between Turkey and Russia on north-eastern Syria. The picture will become clearer in the coming days and weeks.