All the sources and data on the subject indicate that the PYD, which endeavors to idealize its armed conflict in the guise of fighting a liberation war, systematically engages in child recruitment, which is mainly due to the obstacles the organization faces in mobilizing militants while proving that the PYD’s ideology does not address the masses in the region. 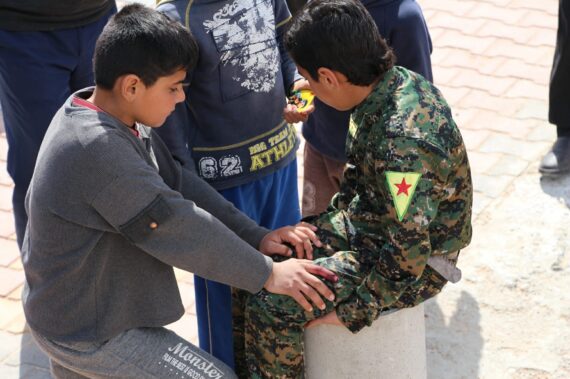 The outlawed PKK’s Syrian offshoot Democratic Union Party (PYD) has been forcibly recruiting children similar to the PKK, which has been systematically using children in armed conflicts since 1994. It is not possible to learn the exact number of children recruited by the group. However, after the death of Latife Kaya in 2016, who was notorious for recruiting girls traveling alone around the checkpoints in Qamishli region by either convincing them or forcibly bringing them to the PYD’s training camps, it was revealed that Kaya and her friends recruited more than 500 girls through this way. Meanwhile, it has been observed that the situation caused by the group’s recruitment policy particularly in the regions they capture is even graver.

The group’s recruitment of children is known from a variety of sources including the victim testimonials covered by the media, videos of the group militants uploaded on YouTube, U.S. CENTCOM’s tweets informing that the PYD and its child soldiers were ready for war, and fashion magazine Marie Claire’s article titled “These Remarkable Women Are Fighting ISIS. It’s Time You Know Who They Are.” Some of these publications represent the children fighting in the deployments of the PYD as the subjects of a liberation war when child recruitment is in fact a serious war crime that cannot be justified with any excuse.

A number of verdicts issued by the International Criminal Court (ICC), which was established with the Rome Statute, led to the conviction of the leaders of two terror organizations on the grounds of forcibly conscripting child soldiers. An arrest warrant was issued for Bosco Ntaganda while the Union of Congolese Patriots (UPC) leader Thomas Lubanga Dylio was sentenced to 14 years imprisonment. Furthermore, the regulations ban the involvement of children in any act linked to terror organizations along with the deployment of children in armed conflicts, which entails the risk of death or injury.

The 2007 Paris Principles, which is the most comprehensive regulation on the subject, defines “a child associated with an armed force or armed group” as any person below 18 years of age who is or who has been recruited or used by an armed force or armed group in any capacity, including but not limited to children, boys and girls, used as fighters, cooks, porters, messengers, spies or for sexual purposes.

In the framework of the ban, there is no difference between the voluntary and involuntary recruitment of children in an armed group. In both cases, the will of children cannot be regarded as consent in legal terms. The protection of the child requires annulling the child’s will to his/her own detriment. Also, the consent given to an unlawful activity is already invalid.

Aside from the legal aspect of the subject, assuming the voluntary participation of children into an armed group implies that they can also voluntarily depart the group, which is hardly the case for terror groups. In an interview published in the website of Kurd Watch, Nurman Ibrahim Khalifa, who was abducted and conscripted by the PYD in 2014 as he was 13 years old, stated that a great number of children kept at the Iraqi Kurdistan camps were severely punished due to their attempts to escape, adding that a woman who was recruited as a child was killed before the eyes of people and her body was thrown into a lake after she was caught in her eighth attempt to escape when she was 18.

A great number of children kept at the Iraqi Kurdistan camps were severely punished due to their attempts to escape, adding that a woman who was recruited as a child was killed before the eyes of people

In 2013, when the organization’s child recruitment stirred reaction from the international public, the PYD signed the “Deed of Commitment for the Protection of Children from the Effects of Armed Conflict” in Qandil with an NGO named Geneva Call, guaranteeing that they would not conscript child soldiers under the age of 18. However, it was unraveled that the organization still continued using children after signing this contract except from a small-scale demobilization following the signing, and broke into houses and abducted children by clashing with their families when they needed more militants. Although the organization ran propaganda to the international public that this situation was an exception, the statements of the victims, the propaganda and actions of the group, and the fact that the group has members in charge of recruiting and training children demonstrate that using children in armed conflicts is a systematic practice for the organization.

As the recruitment cases are examined, it is seen that the organization increases its forcible recruitment activities when they have growing need for militants and goes beyond the limits of their self-proclaimed commitments during such times. For instance, the organization ruled that they would recruit people aged between 18 and 30 in Jazira, but in their practices in Manbij during 2016, a conscription was ruled for persons aged between 16 and 35. Also, in their actions in Afrin shaped through Turkey’s operation in the region, the group increased its forcible recruitment of children out of panic.

A Syrian man who took refuge in Turkey said that after the capture of Raqqa by the PYD, the group forcibly recruited girls from houses with no men, demanded $20.000 from the families not allowing that, and they silently had to watch their daughter taken from them

At this point, the accounts of the children who escaped from the group and the people who left their hometowns are of utmost significance as they portray first-hand experiences and testimonials. In an interview he gave to the press, a Syrian man who took refuge in Turkey said that after the capture of Raqqa by the PYD, the group forcibly recruited girls from houses with no men, demanded $20.000 from the families not allowing that, and they silently had to watch their daughter taken from them since they were unable to pay the money demanded. The Syrian refugee also relayed that his 65-year-old uncle who tried to prevent the abduction of his two daughters was wounded by the group militants with a gun stroke. Upon this, the two families met in the midnight of the same day and took refuge in Turkey.

In another news report published on February 11, 2018, a boy aged around 12-14 stated that the PYD’s armed wing People’s Protection Units (YPG) forcibly gave military training to a group of children including him, and he fled after 12 days, adding that everyone he saw in the camp was forcibly recruited. Another boy around the same age also said that the YPG militants raided into their house to take him. His father fought the militants but could not stop them. According to the account of another boy, he was abducted and brought to a conflict zone by the group militants when he refused to join them.

Besides, the propaganda videos uploaded on the organization’s YouTube channels, such as YPG Press Office, feature a great deal of footage displaying child warriors. These videos try to create the impression that the children joined the PYD with motivations like fighting against Daesh, the liberation of the Kurdish people and freedom of women. In doing so, the organization strives to whitewash its policy based on systematic child rights abuse by making use of generally-accepted notions. The Western supporters of this policy also release material contributing to the group propaganda. In a video titled “Her War: Women vs. ISIS,” which was uploaded on RT America’s YouTube channel, a 16-year-old girl expresses that her participation in the group’s armed units is an honor to her family, adding that she does not go to school since women’s liberation is more important than going to school.

The organization also has members responsible for conscripting and training children. Beritan Sela, who is featured in the videos titled “Women Against Daesh” on the YouTube channel of BBC News, states that they are training the youth aged between 17 and 18. The videos shared on RT America’s YouTube channel also features a member of the Women’s Protection Units (YPJ), whose code name is Tolheldan, while engaging in the training of girls in the Sehit Berivan training camp. Some militants also endeavor to gather children by going from house to house. In another incident reported by the NSO’s website, a man named Natheer Mostafa was arrested by the YPG as he tried to protect his children from the organization. NSO also reported that a YPG member called Qaraso used to visit Mostafa’s house when Natheer Mostafa and his wife were outside and tried to convince their daughters to join the YPJ, the female equivalent of the YPG.

All the sources and data on the subject indicate that the PYD, which endeavors to idealize its armed conflict in the guise of fighting a liberation war, systematically engages in child recruitment, which is mainly due to the obstacles the organization faces in mobilizing militants while proving that the PYD’s ideology does not address the masses in the region. The organization’s discourse is purportedly based on generally-accepted values, but this does not mean that they embrace these values as they claim to do and does not render the conflicts involving children ethical. Aside from the PYD, states and media outlets giving overt or covert support to child recruitment are also responsible for the risks children will undergo in conflicts and the challenges they will encounter in their education and rehabilitation processes following the conflicts. 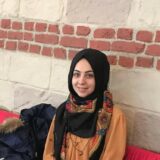 Fatma Sümer graduated from Istanbul University Faculty of Law in 2012. After completing her MA in Public Law, she is currently pursuing her PhD at Marmara University. Sümer is currently a Research Assistant in the Law and Human Rights Directorate at SETA, Ankara.

Also Read
How Will Antony Blinken Handle US Foreign Policy on Syria, Turkey and Yemen?
We use cookies to optimize your online user experience. To learn about our use of cookies and how you can manage your cookie settings, please see our Privacy Policy. By continuing to use our site you are excepting our use of cookies.Accept Cookies & CloseMore Info