The EU which doesn’t want the UK to leave the union at all, but prefers an arrangement whereby London stays close to the EU but has no part of the decision-making process in Brussels. 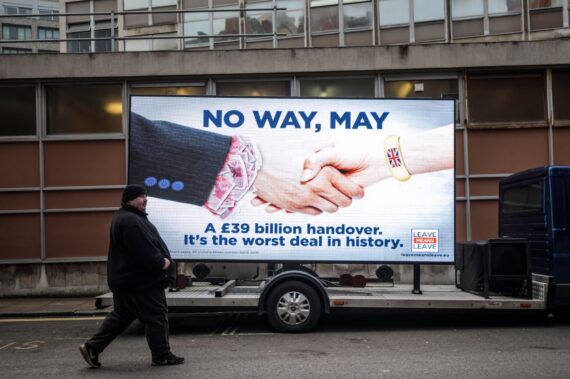 Many in Turkey who are observing the Brexit fiasco must be asking themselves what are the implications towards their country – which has impressive trade relations with the UK  – if Brexit doesn’t happen and Britain exits the EU on March 29 with no deal. Some will also be asking themselves is there anything for Ankara to learn from the provisional deal which has been agreed by Brussels?

We should remember that the deal provisionally agreed by Brussels and the UK government is not the ultimate Brexit, but merely one which focuses on the withdrawal component of Brexit. And yet, it already stinks. Once again, Britain is being convinced that it has a ‘good deal’ for itself, when in reality, it is being sold a sack of rotting fish.

If Brexit doesn’t happen and Britain exits the EU on March 29 with no deal, some will be asking themselves if there is anything for Ankara to learn from the provisional deal which has been agreed by Brussels?

Britain’s fisheries rights after leaving the EU is where we should start to prove such a point. France’s Emmanuel Macron admitted as much when pushed to comment on whether the EU fisherman would still have access to Britain’s waters, as part of a new ‘trade deal’ between London and Brussels. Britain will have to pay such a price, he said, if it is to be granted special access to the EU single market for its goods and services (if they are to remain tariff free).

It’s a minor cover up of the truth both by the May government and Brussels that the withdrawal agreement fudges and deliberately refuses to cover. And it’s just one of many salient points which will steer MPs in London to reject the deal leading May to have to fend off yet another political crisis as the UK heads towards the March 29 Brexit date with no deal, offering two scenarios: one, WTO trade rules will kick in, which is bad news for both parties, but more so for Brussels as German and French companies which enjoy at least 100bn euros of sales to the UK. Or two, both parties will agree for an extension to negotiations of perhaps one more year, which would undoubtedly mean a better deal for Britain.

May has insisted that the EU will not come back to the negotiating table one more time, but in reality, they will do just that when its top officials see that Brexit is blowing up in their faces and threatens to wobble the already weak EU project, which is heading towards its own elections just a couple of months afterwards, with record low turn outs expected and further boosts to far right parties.

Not really a Brexit at all

The problem really is that the Brexit deal that Theresa May believes she has brilliantly negotiated isn’t really a Brexit at all. It is in fact a dream ticket for the EU which, in practical terms, doesn’t want the UK to leave the EU at all, but prefers an arrangement whereby London stays close to the EU but has no part of the decision-making process in Brussels.

The UK is expected to pay a 40bn pound divorce ‘settlement.’ And this is a deal which Theresa May is presenting as a good deal for the UK?

The EU mandarins in the European Commission want no disruption to EU trade with the UK, wants UK companies to comply with all EU laws, EU state aid laws and all EU competition laws to remain, insist that the UK can still not negotiate trade deals with other countries and wants full access to UK fishing waters. In return it will allow the UK to have control of its own borders and no longer pay an annual membership fee to the EU. On top of that, the UK is expected to pay a 40bn pound divorce ‘settlement.’ And this is a deal which Theresa May is presenting as a good deal for the UK?

Or is it perhaps one which preserves her political legacy, a prime minister whose heart was never really in Brexit in the first place?

It’s a rat trap. Here’s how

EU leaders and European Commission officials are happy with this withdrawal deal as it serves the Brussels project almost entirely and delivers hardly anything in return to the UK. It also sets the stage for a huge trap which the UK will fall into, once we pass the March 29 deadline, in that the terms of the real deal, will be heavily tilted against the UK. It is already clear that the incendiary subjects, like UK fishery rights, will be hidden for the moment, until the UK moves ahead with the present draft.

This is how the EU operates. Hiding in the shadows and not playing a straight forward and fair game. After working in Brussels for 11 years, I learnt myself how the EU doesn’t like openness and fairness. I believe that the EU was trying to trick the UK into a deal which only ruin the UK and makes Brussels shine into the bargain. Brussels was never really sincere about being a straight forward negotiator but really playing a game of dirty tricks, forcing Britain to quickly start negotiations so as to kickstart a two year deadline and then waste all of that time in pretending to the UK team that they were open to genuine negotiation. In reality, we now know that the EU side was entirely disingenuous as May’s Brexit deal is a great deal for Brussels and a truly awful one for Britain.

This is how the EU operates. Hiding in the shadows and not playing a straight forward and fair game. After working in Brussels for 11 years, I learnt myself how the EU doesn’t like openness and fairness.

Brussels has always been worried over Brexit setting an example for other countries to follow and was always determined to capitalize on Brexit to demonstrate the futility of leaving the EU to other eurosceptic countries mulling the idea of leaving the EU. Now, red in tooth and claw, Brussels has what it craves: a weak Britain about to be pounded by a Brexit deal which in fact will cost it a fortune and keep it under the thumb of the EU.

Under the deal, if Britain wishes to stay in the ‘single market’ (continue trading with zero tariffs with the rest of the EU), then it will have to respect EU laws – a triumph of absurdity given that a big complaint from British business was that it was being beaten by non EU companies, who weren’t shackled by EU regulation, flooding the same market with cheaper goods. But the greater farce, which will have them laughing in Brussels for weeks and months to come, is that the deal that May has proposed will not let Britain negotiate trade deals with other countries around the world – a silver bullet if ever there was one, for a post Brexit government to counter the economic strains put on the economy in the first few years. Many in the UK don’t trust the EU to let Britain ever have the freedom to make its own trade deals – preferring that it doesn’t excel as a dynamic autonomous economy rivaling the old guard.

It’s almost a stroke of genius for Junker and his officials who must be toasting champagne in the Belgian capital after the EU Summit of November 25th where all EU leaders backed the Brexit deal.

The allure of the dreaded EU Customs Union and remaining in it which is the killer blow and the trap to Britain’s post Brexit prosperity and the EU knows it, which is why it has played this card. To deny Britain access to this without giving up its right to cut trade deal with whomever it likes round the globe, like China, U.S. or others ensures poverty, austerity and economic decline for Britain but much more importantly, provides the EU with a stellar PR campaign for its own longevity. It has, since its inception, always behaved like an autocratic, super state bully which is omnipotent, as a counterweight, to its member states democratic systems and what we are witnessing with the Brexit deal is just that: a weak Britain which has been tricked and bullied into a deal which will only serve the purposes of the EU.

It’s almost a stroke of genius for Junker and his officials who must be toasting champagne in the Belgian capital after the EU Summit of November 25th where all EU leaders backed the deal. But it is a shocking embarrassment for the UK that it has a prime minister who seems even weaker, more naïve and vain that Neville Chamberlain who came back from Europe in 1938 waving a document which he claimed would save Britain from the abyss. British MPs should not believe Jean-Claude Junker when he told a BBC journalist twice “This is the only deal…this is the only deal.”

To have control of immigration isn’t really a big deal as May fails to explain in her speech in Brussels on Sunday 25th that there will be a price for Britons wishing to visit, work or live in the EU. No longer having to pay 19bn pounds sterling each year (net) into the EU budget also isn’t that huge a deal given that half of it comes back with subsidies anyway; compared to the 40 billion pounds divorce bill which is also part of the deal and it becomes clear that the EU will still be taking money off cash-strapped Britain for many years, while preventing it from flourishing economically. But the absurd practice of Dutch fisherman fishing in UK waters and selling their catches to Britain might well continue as by the time May gets to this, it will be too late and the UK will have no leverage left. This is the finesse of the hand that the EU is playing and now, Britain holds its breath to see if its parliamentarians will grasp the nettle in early December when MPs will finally vote on May’s Brexit draft, with many pundits claiming that it will be rejected.

Ankara should take note that the EU seldom tells the truth, nor plays straight when it comes to its own sanctity and Turkey can hardly expect fair treatment if it decides to enter, while the UK is robbed on its way out.

Junker’s statement that it is the only deal on the table will then look farcical and we will see the European Union for what it is. The present Brexit withdrawal deal is merely the first barb of a venomous claw which will destroy the British economy and preserve Junker’s federalist wet dream in Brussels. It’s a deal which is almost entirely about the preservation of the European Union, which once again, Britain will pay handsomely towards. Ankara should take note that the EU seldom tells the truth, nor plays straight when it comes to its own sanctity and Turkey can hardly expect fair treatment if it decides to enter, while the UK is robbed on its way out.