Sarrazin concludes that the “religiously colored cultural unity of the majority of Muslims” and their rising birth rates in Europe, and in particular in Germany, threatens open society, democracy, and prosperity. As a consequence, Sarrazin argues, Muslim immigration has to be strictly regulated. 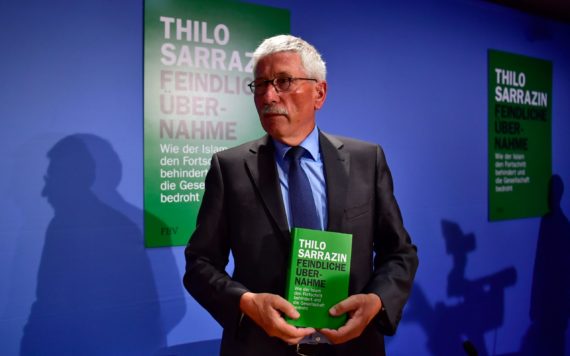 In 2010, former member of the Berlin city government and of the Bundesbank’s board, Thilo Sarrazin, published his bestseller “Germany Abolishes Itself,” which subsequently caused broad controversy within and outside of Germany. Until that time it was interesting to note that even though nobody publicly supported Sarrazin’s anti-Muslim oriented thesis, behind closed doors more and more people addressed an alleged danger coming with and from Muslims in Europe.

Eight years later, last week, Sarrazin published another controversial book, at a time when, for instance, neo-Nazis and far-right extremists literally chase people on the streets of Germany’s Saxonian city of Chemnitz. It is a mistake to label all citizens who support the far-right AfD as Nazis or just extreme-rightists. But it wouldn’t be wrong to stress once again Germany’s racism and extremism problem above all in some parts of the country – as one has witnessed the recent events and mob violence in Chemnitz.

It’s quite understandable that Sarrazin published his new book “Hostile Takeover – How Islam Obstructs Progress and Threatens Society” under these tense conditions in Germany by stating during the book launch that Islam is a “violent ideology cloaked as a religion.” Without problematizing the absurdity that Sarrazin is still a member of Germany’s social-democrat SPD – due to the party’s failed attempts to exclude him from the party – it has to be mentioned that the new book does not differ from his previous thesis. Sarrazin concludes that the “religiously colored cultural unity of the majority of Muslims” and their rising birth rates in Europe, and in particular in Germany, threatens open society, democracy, and prosperity. As a consequence, Sarrazin argues, Muslim immigration has to be strictly regulated. It can be said that in most of the circa 500 pages long book, known generalizations and exaggerations are preferred.

Without doubt, under the current conditions, Thilo Sarrazin’s new book will most likely contribute in a negative way and deteriorate the country’s mood in the upcoming weeks and months right before the parliamentary elections in some German states. While, according to recent polls, the ruling or major parties, such as the conservative CDU (in Saxony, or the sister-party CSU in Bavaria) and the social-democrat SPD, lose gradually more and more votes, the current de-facto racism-representative party, AfD, will most likely achieve new records in each election. Unfortunately, it’s not a secret that even in some smaller CSU factions, the possibility of forming a coalition with the AfD is on the table.

By focusing on most of the mainstream media’s comments and book reviews, most authors are heavily criticizing Sarrazin’s main arguments, its baseless thesis, which lacks academic and reasonable depth. For instance, one of the striking elaborations came from Anna Sauerbrey, who even recommends not to read the book, although she’s criticized for that by alleged “unprejudiced” readers. Sauerbrey states that Sarrazin did not read enough academic publications for his book, while he presents statistics and facts in a false way. According to Sauerbrey, while not everything written by Sarrazin should be rejected, it is no lie that his views are extremely one-sided and biased. All in all, Sauerbrey points out to parts of the book where the cultural racism addresses Muslims’ alleged “lesser cognitive abilities or quasi-genetically cultural characteristics of people, are only “disgusting.”

But what I want to emphasize lastly in this column today is an interesting point regarding the German media’s coverage with regard to the Turkish and German audience.

For instance, like several other pieces, an article covering Sarrazin’s new book was also published on “Deutsche Welle Türkçe,” which is a Germany-based news portal that publishes in Turkish –covering news from both Turkey and Germany. The related –Turkish written– article contains important details about the book and stresses the opinion of the renowned professor Mathias Rohe from the University of Erlangen-Nuremberg. In this article, which is based on the statements of Prof. Mathias Rohe, which he gave to Germany’s official news agency “dpa,” Rohe criticizes Sarrazin’s arguments harshly. Rohe rejects, for instance, Sarrazin’s claim about Muslims’ lack of understanding of democracy. By criticizing several other points in Sarrazin’s book, which are stated in the Turkish language DW-article, the professor also ironically states that “Sarrazin could actually fit very well into the advisory board of a Salafist association.”

But interestingly, all these statements by Prof. Mathias Rohe cannot be found in any other version of the DW articles; neither in German nor English. But why? Actually, Mathias Rohe is a renowned German professor of Islamic law who also advises Germany’s domestic intelligence agency. But the majority of renowned German media outlets just preferred certain statements of Rohe such as: “The nuclear project ‘the hostile takeover’ (of the book) is untenable” or his words about “Sarrazin’s assessments revealed ‘common dilettantism.’”

We will continue to discuss this issue in the upcoming weeks. But until then, I share the opinion of Mrs. Sauebrey and recommend as well: Do not waste your time by reading the above-mentioned book or similar pieces. Honestly, it would be quite enough to read extensive summaries. Instead of that, one might take the time to read actual publications with depth although these do not fit with ourselves’ own ideas and expectations.