Time to Invest in Turkey?

The sharp depreciation of the Turkish Lira (TL) has made the value of Turkish assets cheaper, creating profitable investment opportunities for foreign capital. It is not difficult to guess that individuals and businesspeople that make investments in Turkey at such an appropriate time will get high returns in the medium and long run. 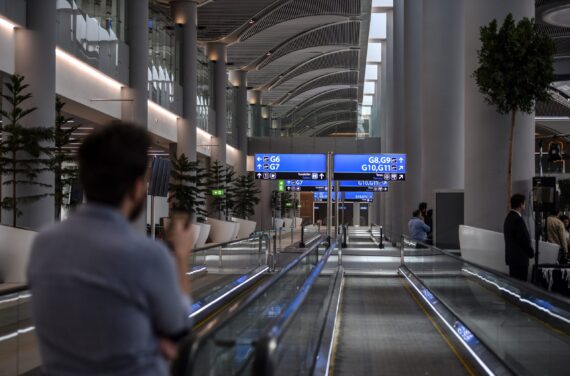 Visitors are seen in the new airport building during a press tour of Istanbul's third airport, the Istanbul New Airport, in the Arnavutkoy district on the European side of Istanbul on October 25, 2018. Getty Images

Turkey has left behind one of the most serious speculative attacks faced in its economic history. After the announcement of the New Economic Program, the Central Bank’s aggressive interest rate hike and the partial softening of relations with the U.S., the volatility wave in exchange rates slacked. These developments do not mean that all economic problems have disappeared.

Turkey’s economic management team has been putting its full effort to reduce the inflation rate to single digits, bring the current account deficit under control in a sustainable way, and prevent private companies’ high indebtedness from causing more serious problems. While looking for solutions to these problems, the economy should not be allowed to overcool. The recipe for achieving this is to complete ongoing promising investments and to make new ones.

Frankly speaking, it would be unrealistic to expect domestic companies to increase their investments. Interest rates are too high. Besides, due to shockwaves caused by speculative attacks, domestic entrepreneurs are in a perturbed mode. Therefore, attracting foreign capital and investments is essential.

The sharp depreciation of the Turkish Lira (TL) has made the value of Turkish assets cheaper, creating profitable investment opportunities for foreign capital. It is not difficult to guess that individuals and businesspeople that make investments in Turkey at such an appropriate time will get high returns in the medium and long run.

President Recep Tayyip Erdogan met with senior representatives of Turkey-based U.S firms last month. Treasury and Finance Minister Berat Albayrak held teleconferences, which attracted high interest from investors all around the world. To expand trade and investment ties between Germany and Turkey, the German Economy and Energy Minister Peter Altmaier along with CEOs of several major German companies visited Turkey last week. All these initiatives are crucial to explain and show that the negative effects of exchange rate volatility will be limited and short-term, and Turkey offers reliable long-term investment opportunities.

The value of many companies in the stock market (Borsa İstanbul) have been underpriced since February.  As the volatility of the exchange rate and the level of uncertainties regarding economic policies decrease, foreign investors will begin to buy more shares, paving the way for a new bull market. Since the banking sector dominates Borsa İstanbul, policies on debt restructuring and capital injection will be decisive for the course of the stock market.

Attracting foreign direct investment (FDI) is a reliable option for galvanizing economy activity; but, no matter how much foreign exchange it needs in this economic turbulence, Turkey should no longer give support to FDIs of all kinds. Turkey should be selective in this regard, giving incentives to FDIs that have potential on transferring new technologies, creating jobs and reducing trade deficit. FDIs to the manufacturing industry should be prioritized.

Housing, office and land prices in dollar and euro prices have become quite cheap after the depreciation of the TL. The government should make special sales campaigns to the expats living in Europe. The unpleasant results experienced in some projects of the private sector in the past years might have caused trust problems in the eyes of expats. Therefore, a government guarantee mechanism must be in place to establish trust in the sales campaign and thus reaping the full benefits of it.

As a part of initiatives to promote foreign investments, Turkey has recently reduced required limits for foreigners to acquire Turkish citizenship. Since Turkey provides a better business environment compared with MENA countries, this will encourage businesspeople from this region to make investment in Turkey. This is also a good opportunity for foreigners who plan to own a real estate in Turkey.

The global liquidity squeeze has been posing a major obstacle to Turkey on attracting high amount of foreign investment, as it deserves. But, compared to the last couple of years, Turkey will host more foreign investment in the next two to three-year period. Considering its industry base, human capital, infrastructure and geographic advantages, Turkey is a fertile destination for investors seeking high long-run returns.