Time to Reform the United Nations

...Each and every permanent member of the Council is, to the disappointment of the world community, legally capable of sabotaging the reform of the UN. 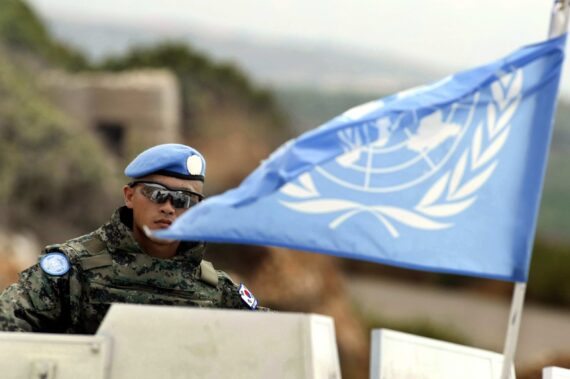 A South Korean UN peacekeeping soldier sits atop an armoured vehicle as he looks at a 155 mm self-propelled artillery gun firing during an exercise to train UN artillerymen to maintain their capacities, in the southern Lebanese village of Naqura 30 August 2007. AFP.

It is about the right time to act in order to reform the United Nations instead of talking about reforming the UN, as has been the case since the mid-1990s. It is now common knowledge that there is something fundamentally wrong about the UN which was supposed to act as the trustee of peace, security, better conditions of living, and cooperation in the world after the Second World War. However, the UN system, with its vast body of institutional machinery and decision-making apparatus combined with a limited budget, has, although at a modest level, managed to better-off the world on a host of “soft” issues of international politics, ranging from codifying international law through support for refugees to educational and medical assistance to some countries in the Third World. Yet, on “hard” matters of international politics, such as war, aggression, militarization, and political coercion, the UN performance could at best be described as “disappointing”.

Indeed, if one looks into the UN through the window of the Security Council, the body entrusted with the task of ensuring international peace and security by virtue of its unlimited powers of decision-making and coercion, one is almost obliged to conceive this organization as an unpleasant leftover from the Cold War. Sadly, this “world body” no longer reflects the true aspirations of the community of nations and societies, especially in Asia and Africa. Under the silence gaze of the UN, many of these societies are beset by international and internecine wars, direct and indirect aggression from outside, poverty, widespread disease, armaments build-ups, war crimes and crimes against humanity, non-representative oppressive regimes, and severe violations of human rights.

The UN has lost its credibility as humanity’s most trusted guardian against aggression and oppression.

The UN has lost its credibility as humanity’s most trusted guardian against aggression and oppression. The permanent members in the Security Council have their own individual agenda, which is, more often than not, set by the dictates of national interests and geopolitical rivalries with other global and/or regional actors. Concerns for international law and justice, alas, play only a negligible role for these actors as we have seen, for instance, in the entire episode of the Palestinian tragedy and the deafening silence in the face of the killing fields of Assad’s Syria since 2011.

Of course, amending the Charter is a herculean task which, inter alia, explains why the UN reforms have not materialized after the Cold War. Indeed, according to Article 108 of the UN Charter, “Amendments to the present Charter shall come into force for all Members of the United Nations when they have been adopted by a vote of two thirds of the members of the General Assembly and ratified in accordance with their respective constitutional processes by two thirds of the Members of the United Nations, including all the permanent members of the Security Council.” This is another way of saying that; each and every permanent member of the Council is, to the disappointment of the world community, legally capable of sabotaging the reform of the UN. However, this is a task from which not even permanent members can escape for long without harming their reputation and credibility.

The reforms should begin with the lifting of the veto privilege for permanent members.

The reforms should begin with the lifting of the veto privilege for permanent members. Besides, a reshuffling of the UN Security Council should, at least, involve the addition of new (permanent) members. In addition to considering states with a huge population and economic clout, as in the case of India and Brazil, there needs to be representation in regards to the Muslim world that consists of 1.7 billion people. Two possible formulas may be offered for this purpose: first, a member state of the Islamic Cooperation Organization (ICO) may be assigned this task by this body on rotating principle; second, the ICO may confer this task to a respected Muslim statesman on an agenda set by the same.

In the likelihood of a comprehensive amendment of the UN Charter, the powers of the General Assembly ought to be enhanced so that this, most representative of UN bodies, has greater say in matters of war, peace and aggression. All the UN member states are also members of the General Assembly and have equal weight based on the principle of one state-one vote. The debates in the Assembly are conducted in the open which suggests that bargaining behind closed doors and elements of coercion by strong actors are less plausible in this organ compared to the Security Council in which only 10 provisional members are represented in the face of five permanent members with veto powers. By virtue of reforms, the veto power in the Security Council ought to be lifted considering that a veto cast by a permanent member against the wishes of the rest-14 on a proposed resolution, spoils the whole process. The veto is a sure recipe for deadlocks and stagnation in the Security Council.

The reforms should also ensure that the UN Security Council decisions imposing sanctions or military enforcement action against an allegedly peace-violating state ought to be submitted to the Assembly in order to ensure that the motion gets the consent of the General Assembly by a two-thirds majority. This is a must in order that the Council (or, rather, some permanent members) is not accused of adopting a politically-motivated posture intended to serve a particular foreign policy objective. As a representative and transparent body, the seal of approval by the Assembly is almost certain to convince the world public opinion that a given “effective” Security Council resolution is legally sound, legitimate and fair. Another measure of caution against politically-motivated Security Council resolutions should be the judicial review of the (binding) Council resolutions by the International Court of Justice. If a particular motion, when put into action, is, for instance, likely to constitute a breach of the fundamental purposes and principles of the UN Charter (1945) or lead to crimes against humanity, it should be declared null and void by the Court.

The reform of the UN should be deemed incomplete without touching on the authority of the Economic and Social Council.

The reform of the UN should be deemed incomplete without touching on the authority of the Economic and Social Council, the UN body that is tasked to deal with economic and social issues as well as with human rights. This representative body of 54 states, elected by the General Assembly, lacks the requisite binding authority, although poverty, global inequality and human rights count as the most pressing global problems hindering peace. Therefore, this organ ought to be given extra powers so that it issues binding legislation and decisions in the said key areas.

All in all, the UN system needs to undergo a comprehensive overhaul in order to make it more workable and beneficial for humanity. The permanent members of the Council should be part of the solution, and not the problem. If they stubbornly stick to their previous position, they are likely to find that the UN has become a political irrelevancy for the rest of the world community in the years to come.

*This is actually the title of my latest book, in which I investigate the troubled relationship between the Muslim world and the UN security system particularly after the Cold War, Küresel Güvenlikten Küresel Tahakküme: BM Güvenlik Sistemi ve İslam Dünyası, (Küre, 2016).

Professor Berdal Aral completed his PhD on “Turkey and International Society from a Critical Legal Perspective” in 1994 at the University of Glasgow. His main areas of interest include international law and human rights. Prof. Aral currently teaches at the Department of International Relations at Istanbul Medeniyet University.