Tortures, Executions, and Sisi’s Unlimited Credibility in the West

Unlike the toppled president Morsi, Sisi has nothing else other than Western support. Those nine young men would be alive with their families today if only the West had not supported Sisi. 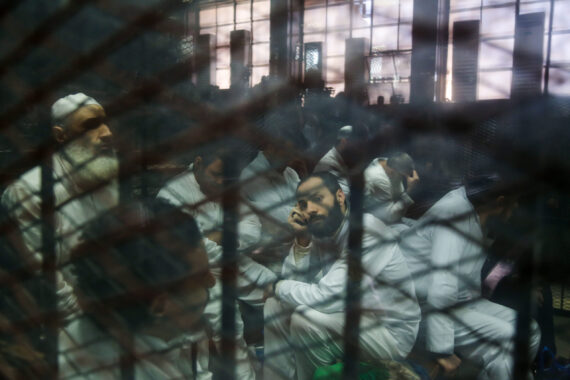 Defendants attend the trial session behind a cage in Cairo, Egypt on January 9, 2018. An Egyptian court slapped some 268 people with jail terms in connection with the dispersal of a major protest camp in support of former President Mohamed Morsi in 2013. Anadolu Agency

On Wednesday (February 20) Egypt executed 9 men over allegations of killing the country’s chief prosecutor, Hisham Barakat, in 2015. Nine young men told the judges during their trial that their confessions were taken under torture. One told the judges that he was threatened by his torturers saying that they would take his parents and do what they want. Another young man told the jury “give me a taser, and I will make someone confess that he killed Sadat.” The country has executed 165 convicts since Abdel Fatah al-Sisi’s coup that toppled the democratically elected president of the country in 2013.

Egypt is one of the scenes where the Arab Spring ended up with an Arab Winter. Egyptians overthrew a military-backed dictator, Mubarak, only to be crushed by another, Sisi. The story started happy as hundreds of thousands gathering in Tahrir Square protested Mubarak, the man who ruled the country for nearly three decades. Mubarak resigned on 11 February 2011, a process led to the 2012 presidential elections in which Mohamed Morsi was elected. Morsi was removed from power with the coup on 3 July 2013, which was led by the army chief general Sisi. As a result of his hijacking of the regime with the coup, Sisi is still the president of the country. Morsi is still in prison and many of his supports have shared the same fate. Egypt put thousands behind bars and the Egyptian courts did not hesitate to give death penalties in hundreds. Torture has become an ordinary method of interrogation and many, most recently last week, were executed based on confessions under torture.

Egypt is one of the scenes where the Arab Spring ended up with an Arab Winter. Egyptians overthrew a military-backed dictator, Mubarak, only to be crushed by another, Sisi.

Despite all the humanitarian crimes the Sisi rejime has been committing, Sisi has kept his good relations with the West undamaged from the coup up until today. What Sisi mas managed so far is to crush the democratic forces of the country thanks to his ongoing war with Daesh militants in the Sinai Peninsula. He whitewashed all his abuses under the guise of fighting against extremism and terrorism. The country has executed at least 165 people up to now since the 2013 coup with hundreds more in the death row. Nevertheless, this is just an invisible detail in Sisi’s relations with the West, particularly the U.S. The people on the Arab streets know very well that Sisi’s repressive regime cannot survive without the U.S. support. It is this Western hypocrisy that drives the masses in the Middle East against the West. It is the relentless Western support for Arab dictators that radicalize those suffering under such horrible rules.

And such a hypocrisy, once again, is seen after the execution of 9 young men in Egypt. We heard very little about it compared to what the Western outlets were pumping against Morsi during his presidency. People are being electrified in masses, being forced to confess the crimes they did not commit, and being executed yet the world seems to be happy with Sisi’s fight with extremism(!)

People on the Arab streets know very well that Sisi’s repressive regime cannot survive without U.S. support. It is this Western hypocrisy that drives the masses in the Middle East against the West. It is the relentless Western support for Arab dictators that radicalize those suffering under such horrible rules.

Of course we heard about the executions, if not from the politicians then from the media outlets. Yet, many established outlets tried their best to distract the readers from this vast scale of atrocities. This is how the Washington Post concluded its piece on the executions: “Egypt has been battling Islamic militants for years. Last year, the government launched a broad security operation focused on northern Sinai, where an Islamic State [Daesh] affiliate has carried out many attacks in recent years.” You open the page in order to read the brutal executions of nine young men yet the ending lines plant the Daesh threat in your mind although the executions have nothing to do with it.

The hypocrisy is not limited to politicians or media outlets, but even the most needed organizations like Freedom House. This Egypt has the same score with Turkey on civil liberties (6 out 7, 7 being the lowest). All this anti-Erdogan rhetoric in the Western press is louder than the tortures and executions of Sisi. Sisi, on the other hand, like Mohammad Bin Salman of Saudi Arabia, is the hope of the West against extremism in the Middle East.

The reality is the opposite though as tortures, executions, and all this repression is fueling radicalization and extremism in the Middle East. And all these complaints about the West is not about asking them to be fair in their opinions of the Middle East. Personally I do not care what individual Western politicians think of Sisi or other political leaders of the region. Nor it is about some big empty kind words from the West for human rights. This is not about words or opinions. And this is not about blaming the West for anything bad occurring in the Middle East. This is about the concrete and tangible Western support for dictators like Sisi. Unlike the toppled president Morsi, Sisi has nothing else other than Western support. Those nine young men would be alive with their families today if only the West had not supported Sisi.