Towards a Limited but Robust Rapprochement Between Turkey and Germany

While on the one hand it can be stated that a new era is launched with Germany, on the other, the negative ambitions of several circles in Germany in regards to Turkey will continue. 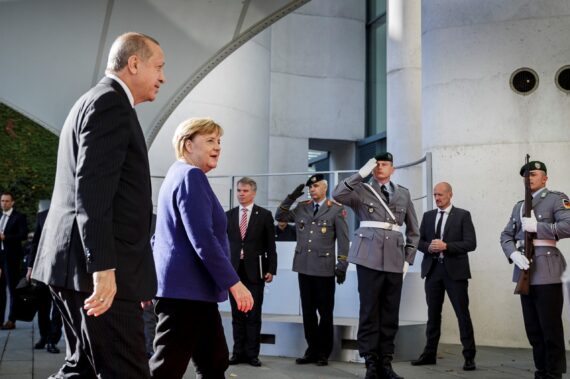 On Thursday, Turkey’s President Erdogan arrived in Germany for a three-day lasting official state visit. As was planned, he met with both Germany’s President Frank-Walter Steinmeier and Chancellor Merkel in Berlin. On the third day, Erdogan concluded his visit by opening one of Europe’s largest mosques in the German city of Cologne.

Several analysts and commentators addressed and stressed the meaning of this visit and its importance with regard to bilateral relations between Turkey and Germany. Of course, there are several aspects that might be analyzed in more depth in the upcoming days. However, the main question, which rose subsequent to the visit, is about the realist expectations right after a period of serious challenges that both countries have faced in recent years.

It has to be underscored that all in all the visit is with no doubt a positive and official step in order to, at least, try to overcome the disputes between the two countries. Besides various topics, it’s not that wrong to state that during the bilateral meetings and discussions, the focus was set on important issues such as the refugee problem, economic relations, and the security priorities of both countries. While there still remains disagreements in regards to the activities of certain groups in Germany, which are elaborated as a national security concern by Turkey, positive steps taken to strengthen economic relations and improvements in the dialogue to fix the political discourse in general seem promising.

From a broader perspective, Germany and the EU still have to face the refugee problem, while Turkey is also considering a burden sharing with potential future escalations in Syria; above all, in a potential future case of a worst-case scenario regarding the Idlib issue.

Apart from the fact that many German media outlets continue to problematize the -cautious- rapprochement of both countries from a single perspective, it’s an apparent success that nevertheless both Turkey and Germany were able to launch a new and fresh page.

With this, one has to keep in mind that Germany’s perception of Turkey is mostly shaped by three major circles. As Professor Kemal Inat recently emphasized, the official visit once again entailed the existence of 1) a circle consisting of rational German politicians and business people, 2) an aggressive anti-Turkey lobby and, finally, 3) a so-called group, which still perceives Turkey as a country to impose Germany’s own interests.

Despite the continuing efforts of the anti-Turkey lobby to prevent these steps, which includes utilizing certain German media outlets and broadcasting preferences, and through the support of groups such as the PKK-friendly Left Party, it seems that nowadays the first circle in discussion has gained fragile power. Steps taken by the first group, which have an ambition to continue dialogue, can be observed as positive. However, given the fragile conditions, one has to be prepared for the likely absurd and non-realistic engagements from the second and third groups, and even from parts of the first group due to some future elections in German federal states, such as in Bavaria on October 14.

Nevertheless, Turkey is aware of these conditions and President Erdogan simply does not accept the ambivalent behavior of some of Germany’s leading figures – including President Steinmeier – who attempted to criticize the Turkish President even during his speech at the official state dinner banquet. Dis-regarding these comments, President Erdogan once again stressed Turkey’s ongoing dissatisfactions by stating, “Unfortunately, hundreds and thousands of terrorists (such as FETO members) are walking freely in Germany. And we’re not going to talk about them? I didn’t want to bring this up tonight. But when the president (Steinmeier) mentioned these issues, I had to.”

Thus, while on the one hand it can be stated that a new era is launched with Germany, on the other, the negative ambitions of several circles in Germany in regards to Turkey will continue. Leading personalities of the two countries have to take these conditions into account, and German authorities ought to be aware of this trap that they may well easily fall in to. The focus on certain issues concerning the interest of both countries will most likely deepen the dialogue between the two and strengthen bilateral relations.