In the years ahead, if it decides to return, U.S. global leadership will find itself in an environment that has fundamentally changed. The emergence of regional cooperation mechanisms and mini-alliances based on a variety of issues will create realities that will not be easy to replace. 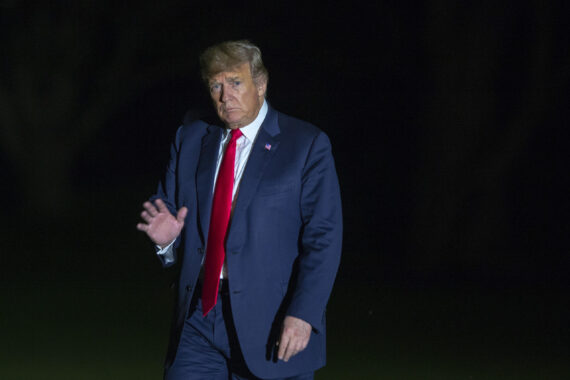 U.S. President Donald Trump exits Marine One on the South Lawn of the White House on October 1, 2018 in Washington, DC. Trump is returning from a Make America Great Rally in Johnson City, Tennessee. Getty Images

There has been a lot of debate about the current U.S. unwillingness to lead the liberal international order it created after World War II. The Obama administration already displayed signs of war weariness, which often translated into no action in conflicts like Syria. On issues that he cared about the most, the Iran nuclear issue and climate change, President Obama worked hard to build international consensus through multilateral institutions in the international system. However, the U.S. was already hesitant to provide leadership on a whole host of issues, particularly in matters of war and peace.

Having run on the theme of “America First,” the Trump administration has transformed this hesitation to what many would call hostility against internationalism and the global institutions themselves. From NATO to NAFTA, military and economic multilateral institutions and agreements have been targeted by President Trump. Traditional allies have been threatened with tariffs and economic pressure unless they agree to deals that would no longer “take advantage” of the U.S. It would be misleading to label this attitude isolationism per se. The Trump administration has been insisting that these international institutions and agreements be made to serve U.S. interests even if it is at the expense of international liberal order.

Just as we saw in the case of the Obama administration’s reluctance to lead, we are now witnessing the Trump administration’s resentment against the international system and that the U.S. is reconsidering its global role. Clearly, both administrations provided no comprehensive answers to the leadership question and both of their approaches have been subject to heavy contestation from both the left and the right domestically. Furthermore, more often than not, the Trump administration’s admonishment of the international system has subsided with rather superficial adjustments (NATO members’ promise to increase their national defense budget to 2%) or renegotiated trade deals (U.S.-Mexico-Canada Trade Agreement instead of NAFTA). The lesson here is that neither the Obama nor Trump administration has addressed the global leadership question in a comprehensive manner.

The message to the world has been that the U.S. has been rethinking its global role in a rather confused and haphazard manner. At times, the somewhat ideological assertion of national sovereignty seems to take priority whereas, at other times, satisfying some domestic constituency seems to suffice. The response of both the allies (the EU and others) as well as potential rivals (China) have been an interesting one. Nobody seems willing to sit and wait for the U.S. to “come to its senses.”

Allies are thinking of ways to live without the U.S. leadership, recognizing that they may even have to confront the U.S. along the way. The rebuff President Trump received from the UN Security Council a special session on Iran, which was instructive in this sense. Potential competitors like China, on the other hand, are working hard to minimize the economic impact of the impending trade wars by strengthening their regional relationships. In many ways, the world is not waiting for the U.S.

Turkey, as a traditional ally, has had to adjust to the regional realities with minimal or no serious U.S. leadership on a variety of issues including the Syrian crisis. In order to protect its national security and economic interests in the region by minimizing the detrimental impact of the Syrian conflict, Turkey has worked with Russia and Iran on the diplomatic and strategic fronts, the EU on the humanitarian front, and the U.S. on the political front.

The days of alignment with a clearly identified bloc of nations are long gone. Creating a strategy based on the realities on the ground and one that accommodates some of the priorities of the regional powers has become a routine part of policymaking. The most recent rapprochement with Germany can be given as an example of an effort to “bring Europe in” in the absence of robust U.S. leadership.

In the years ahead, if it decides to return, U.S. global leadership will find itself in an environment that has fundamentally changed. The emergence of regional cooperation mechanisms and mini-alliances based on a variety of issues will create realities that will not be easy to replace.

Providing a global framework for action will be ever more difficult since many countries, both allies and rivals, will have pivoted away on a whole host of strategic and economic issues. The U.S. will continue to enjoy great capacity to shape world events, alliances and institutions for the foreseeable future but it will find it increasingly challenging to lead given the legacy of these intervening years with minimal serious U.S. role.