Towards a New Strategic Partnership between Turkey and the Gulf?

The close cooperation between Turkey and the Gulf countries on issues like Syria, DAESH, Iran and regional stability will yield a win-win situation for both parties in the short and midterms. 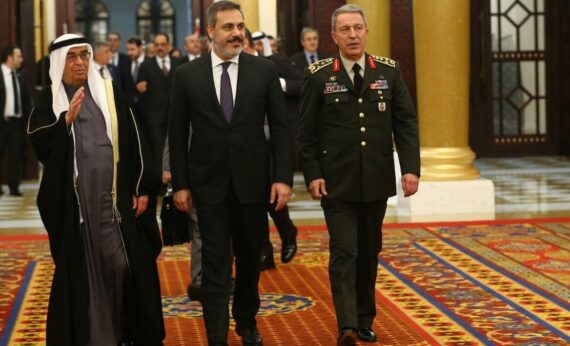 A sustainable resolution to the instability in the Middle East that emerged with the Arab Spring has yet to be proposed. The countries in the region are already being affected negatively by the instability. Terrorist and sub-state actors have gained such vast areas of influence that a long time is needed to eradicate their harmful effects. International actors have stayed passive while they should actively and staunchly work for the elimination of instability, instead their inaction has led to the perpetuation of the instability.

Of course, the countries of the region share the blame, having prioritized historical rivalries and striving for power and increasing their influence in the new regional order. All of these caused terror to gain momentum, for proxy wars to flourish, and shook the nation-states to their very core. It should not be forgotten that political actors like al-Assad, who laid waste to his own country, have also contributed to the chaos in the region.

The aforementioned factors made the instability a stable feature of the Middle East. It is obvious that Turkey and the Gulf countries are not content with the regional developments. They had been the US’ strategic partners during the Cold War, but disillusioned with the US after the Second Iraq War (2003) and the Arab Spring, respectively. Especially President Obama’s Middle East policies, which exacerbated the instability, raised concerns in Turkey and the Gulf countries over their own national security. Obama’s presidency and heritage will remain as bitter memories in both nations’ minds.

President Erdoğan recently went on a Gulf tour consisting of three countries: Bahrain, Saudi Arabia, and Qatar. He was welcomed by high-ranking leaders in all three counties and returned to Turkey after striking deals in the trade, finance, culture, and defense sectors. It should be noted that Iranian leader Rouhani was visiting the other two Gulf countries, Oman and Kuwait, while Erdoğan was in the Gulf. These visits revealed which actors Turkey and Iran had better relations with. We can say that Turkey and the Gulf countries are of the same mind in certain regional issues, while keeping in mind that Gulf countries have certain differences amongst themselves. When it comes to US relations, regional stability, and terror, Turkey and the Gulf countries have common concerns.

Firstly, there are issues concerning foreign policy: the security of the Gulf becoming a secondary concern for the US, the US paving the way for Iran’s influence with the nuclear deal, and the US’ stance towards countries of the region like Iraq and Syria. The US’ retreat from the Gulf in the military sense caused a serious trauma to the Gulf countries, as the US had been the de facto guarantor of the Gulf since World War II. The content of this trauma reminds one of the serious crises caused by President Lyndon B. Johnson’s 1964 letter to Turkish Prime Minister İsmet İnönü. With this letter, Turkey experienced the disadvantages of relying on a single actor in its security policies.

Still, Turkey experienced even worse relations with the US in the last couple of years. The July 15 coup attempt being almost disregarded by the US,  the US arming PYD and YPG in Syria and providing to political support to the said organizations, along with not adequately supporting Turkey in its fight against terror, are some of the indicators of this troubled period. Moreover, while Turkey is having judicial problems with the US over the extradition of FETO leader Fetullah Gülen, the Gulf countries also have judicial issues with the US over recent legislation allowing Americans to sue foreign governments for alleged support for terrorism (JASTA).

Secondly, limiting Iran’s influence in the region and regional stability are common concerns. While the Gulf countries centered their national security policies around the Muslim Brotherhood after the Arab Spring began, these policies shifted after the nuclear deal was signed between the P5+1 countries and Iran. Iran was once again the main threat to Gulf countries, especially to Saudi Arabia. Following the nuclear deal, Gulf countries began to have closer relations with Turkey in order to counterbalance and limit Iran. Turkey and the Gulf countries, with the exception of Qatar, were in different positions during the Arab Spring. The shift in policies is also closely linked with Saudi King Salman’s ascension to the throne. Iran’s aggressive and interventional stance in Syria, Yemen and Iraq raised concerns in Turkey and the Gulf countries. They all now agree on preventing Iran from gaining further influence.

Thirdly, there are mutual concerns over the elimination of terror, which is the most significant source of the region’s instability. DAESH, the PKK, YPG-PYD, and other terrorist organizations in the region are a threat to countries’ national security, as their regular series of bombings and attacks clearly demonstrate. DAESH’s terrorist actions in both Turkey and Saudi Arabia revealed how much a threat it is to these countries. Since the beginning, Turkey and the Gulf countries have been supporting the international coalition fighting against DAESH, which has employed its field and weapons potential.

But this determination to fight DAESH became more focused after the group carried out suicide bombings in Bahrain and Saudi Arabia. DAESH has also threatened Bahrain, through one of its high-ranking leaders Turki al-Binali who is of Bahraini descent, revealed the extent of the danger posed by the group. Similarly, Turkey is fighting against DAESH, the PKK-PYD-YPG, and FETO with little support. Therefore, Turkey and Gulf countries understand each other better in regards of the fight against terrorism. FETO’s recent recognition as a terrorist organization by the Gulf countries is a crucial indicator of this support.

The aforementioned three factors indicate the necessity for closer relations between Turkey and the Gulf countries. Moreover, these countries have all interposed the threats with almost similar methods. While Turkey is trying to establish its national security outside its borders with Operation Euphrates Shield, Gulf countries have responded to Iran trying to surround them with the Yemen operation. The Gulf countries tried to step up their military drills (e.g. North Thunder) and redesign their military alliances (e.g. Islamic Military Alliance). On the other hand, Turkey improved its military relations with Russia in order to overcome the issues it’s facing in Syria. Therefore, Turkey and the Gulf countries are trying to prepare themselves for an expected future in which the US’s Middle East policies are expected to change with the Trump administration. In this sense, Trump’s statements about Iran and DAESH can be perceived as the harbinger of what’s to come.

In parallel with this, it is possible to make some observations about Erdoğan’s Gulf tour. Firstly, it can be said that Turkey and Gulf countries are thinking of influencing the US’ new Middle East policy. Secondly, they are looking for cooperation in curbing Iran’s excessive influence and pushing it back to its borders. Considering all of these, Erdoğan’s statement about “Persian nationalism” in Bahrain is significant. Lastly, the upcoming Raqqa operation against DAESH will be seemingly vital for regional politics. Turkey expressed that it wants to be alongside the US in the Raqqa operation.

Moreover, Turkey asserted that it wanted to remove PYD-YPG form the operations and replace them with an army which is comprised mainly of Arabs. Therefore, it is possible that Erdoğan requested support from the Gulf countries to have more Arabs in the army which will besiege Raqqa, and to persuade the US to follow this approach. Considering all of these factors, the close cooperation between Turkey and the Gulf countries on issues like Syria, DAESH, Iran and regional stability will yield a win-win situation for both parties in the short and midterms.

Abdullah Erboğa holds a PhD in the Middle East Institute from Sakarya University. His areas of research include Regional Security, Gulf States, US-Gulf Relations and Gulf Security. Erboğa currently works as a Researcher at SETA Istanbul.