Trade Wars after the G20 Summit

If Chinese President Xi Jinping does not offer big enough trade concessions in bilateral negotiations in the future, it is pretty likely that nothing concrete will come out of the G20 proceedings and the agenda of trade wars will be carried towards an indefinite future. 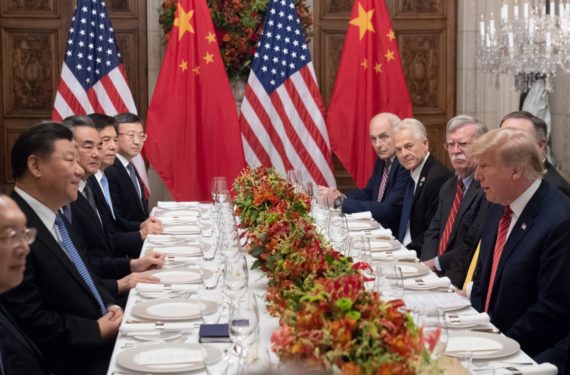 US President Donald Trump (R) and China's President Xi Jinping (L) along with members of their delegations, hold a dinner meeting at the end of the G20 Leaders' Summit in Buenos Aires, on December 01, 2018. Getty Images

The G20 was defined as the principal platform of global economic governance in the aftermath of the global financial crisis in 2008 as a reflection of the need to conduct a collective crisis-response strategy at the time. While the global crisis exploded in the U.S. sub-prime mortgage market and then spread to Europe and the emerging economies, a coordinated response strategy was devised that will encourage all stakeholders to share the burden of reestablishing stability and providing liquidity to the international markets. The G20 was among the few grand projects that President Obama took over from George W. Bush and continued unabated during his two terms as the U.S. President, since the collective action spirit of the group was in perfect conformity with the coordinate crisis response strategy, as well as the positive image that the U.S. wanted to disseminate globally.

In the early post-crisis years, the G20 was presented as the highest international platform to formulate common strategies aimed at ensuring stability in global trade and financial markets. It was also construed as an inclusive forum on which key political leaders from both the global and emerging powers might come together with representatives from the main regional organizations in order to produce multilateral solutions to pressing global problems. To its credit, the G20 contributed to crucial improvements in the governance of global finance by supporting macro-prudential policies, enlarging the IMF’s lending capacity and increasing transparency procedures of banks and financial institutions in international markets.

However, for the BRICS countries led by China and India, the G20 process carried a much deeper symbolic value in terms of the reconfiguration of the global system. The G20 Summits represented a perfect opportunity for these countries to express their grievances and objections concerning the uneven architecture of global governance, while demanding more say in the running of international political and economic institutions. Likewise, representatives of the developing world were able to raise their voices at the G20 concerning unfair practices in global trade and finance regimes, while pushing for structural reforms at the IMF, World Bank and the WTO for more inclusive and fair development.

However, as the intensity of the global financial crisis faded away and especially as the U.S. economy began to display a robust performance, the expectations of Washington and its main allies from the G20 process were significantly curtailed. The U.S. administration itself did not take the macro-prudential regulations produced by the G20 very seriously; while the institutional reform initiatives for voting and representation at the IMF were never materialized. The U.S. maintained its veto power at the IMF and despite all criticisms the uneven distribution of voting rights among the global and emerging powers were preserved in almost its original form. Moreover, comprehensive transformations took place in the global architecture of world politics and domestic political stages of key global players, which significantly weakened the common agenda of participatory governance at the G20.

As the intensity of the global financial crisis faded and as the U.S. economy began to display a robust performance, the expectations of Washington and its main allies from the G20 process were significantly curtailed.

The unilateralism of the Trump administration, which was expressed through withdrawal from multilateral international regimes and regional organizations, neo-protectionist economic policies and trade wars, triggered widespread perceptions that the major sponsor of the G20 has cut its support to multilateralism. Moreover, rising geo-political tensions between the U.S. and Russia in critical conflict zones increasingly led to the adoption of hard-power assets, leading some observers to conclude that the prospects of physical military confrontation are higher than the Cold War. Finally, the rising tide of neo-protectionism and trade wars between the U.S. and China heightened concerns regarding the future growth potential of the world economy and the prospective trajectories of global trade and finance. To sum up, American unilateralism, rising tensions between Washington and Moscow in geo-political matters, and trade wars between Washington and Beijing contributed to pessimistic expectations on the eve of the Buenos Aires Summit.

The official theme of this year’s Summit was determined as ‘Fair and Sustainable Development’ with sub-themes on energy efficiency, environment protection, development financing, digital economy, excess steel-production capacity, and modern agriculture. However, key problems in the world economy remain in need of global attention which include the shortage of development capital required to maintain major infrastructure investments. As the development of finance resources of the World Bank are not enough to spur global growth, the entrance of the Asian Infrastructure Investment Bank and the New Development Bank to the scene must be welcomed developments. But the U.S. and the Western world are generally suspicious of China’s intensions for global dominance, which causes a cautious reception to the financing opportunities that originate from Beijing. Structural reforms in macro-economic policy making and governance are also needed to rejuvenate global growth dynamics. Objectivity of international credit ratings agencies and prudent regulation of financial markets also constitute other areas of major concern.

Rising geo-political tensions between the U.S. and Russia in critical conflict zones has increasingly led to the adoption of hard-power assets, leading some observers to conclude that the prospects of physical military confrontation are higher than the Cold War.

Another area of friction that attracts attention concerns ongoing trade wars between the U.S. and China that carry the potential of undermining global growth prospects via deeper and wider confrontation. Neo-protectionism and trade wars which gained momentum via tough political rhetoric, accusations of industrial-technological espionage and sharp tariff increases between Washington and Beijing across a range of sectors raised concerns among the major players of the world economy. On the eve of the G20 Buenos Aires Summit, it looked like Trump was adamant to force China into a corner by using the trade wars card so that he could elicit the best possible deal from them. But if Chinese President Xi Jinping does not offer big enough trade concessions in bilateral negotiations in the future, it is pretty likely that nothing concrete will come out from the G20 proceedings and the agenda of trade wars will be carried towards an indefinite future. As the U.S. economy continues to break historical records in growth, employment and productivity figures and China begins to struggle to maintain the momentum of its export-led growth strategy, a prolonged agenda of trade wars might trigger wider destabilizing effects that might hurt all emerging economies.

The G20 Buenos Aires Summit was shadowed by the new trade deal signed between the U.S., Mexico and Canada (or the so-called US-Mexico-Canada Agreement-USMCA), which was carved out to replace NAFTA via intensive U.S. diplomacy. The message that President Trump tried to give to the global audience through the USMCA was that the U.S. will redefine the conditions of its bilateral and multilateral dealings on the basis of a renewed notion national interest, rather than concerns for regional or global stability.

If Chinese President Xi Jinping does not offer big enough trade concessions in bilateral negotiations in the future, it is pretty likely that nothing concrete will come out of the G20 proceedings and the agenda of trade wars will be carried towards an indefinite future.

Over the course of last two years, the global image of the U.S. has already been significantly tarnished thanks to the controversial steps towards the NAFTA partners; decision to construct a wall on the Mexican border against migrants; threats towards NATO partners and the EU; withdrawal from various UN platforms, as well as the Paris Climate Accord. The tendency of the U.S. to act in disregard for international law, established norms and previous commitments might trigger collective responses from the EU, China, Russia and emerging powers against unilateral sanctions and trade wars.

While observers will wait for signals of a rapprochement between the U.S. and Russia on the Ukraine crisis, and a trade deal between the ‘G-2’ of the U.S. and China to end the vicious circle of trade wars, swift progress on both counts in the near future remain unrealistic. The new world of multi-polarity will be characterized by issue-based confrontations that are bound to continue.