The midterms created a split in Congress, which promises major political showdowns between the President and House Democrats. As further infighting appears to be on the horizon, Trump may turn to foreign policy to project an image of strength despite his domestically inclined America first agenda. 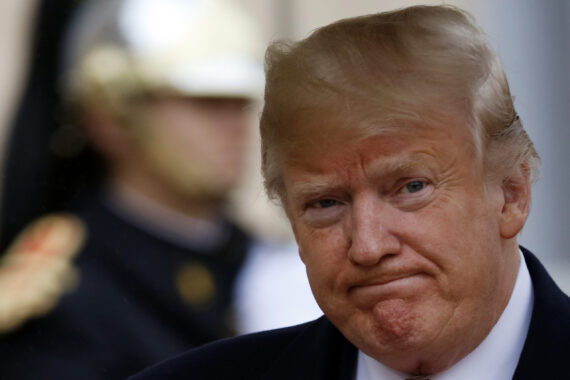 President of The United States of America Donald Trump arrives for the lunch after the commemoration of the 100th anniversary of the end of WWI at Elysee Palace on November 11, 2018 in Paris, France. Getty Images

The last season of the much-acclaimed House of Cards features the story of the first woman American president Claire Underwood (Hale). The storyline is quite a bit of a commentary on the current debates in U.S. politics, women’s participation in politics, relations with Russia, impeachment of a president or even a Supreme Court judge among others. In the first two years of Trump’s presidency, many controversies have dominated the political debate but the president has not been seriously threatened despite much political ruckus. With Democrats in the House majority now, more political turmoil awaits the U.S. public as a number of investigations may be conducted in the coming months. Not to mention the Mueller probe that may have fatal consequences for President Trump. The midterms created a split in Congress, which promises major political showdowns between the President and House Democrats. As further infighting appears to be on the horizon, Trump may turn to foreign policy to project an image of strength despite his domestically inclined America first agenda.

Democrats will have to play their “cards” carefully as they will not want to be seen as “obstructionists” who are only interested in going after President Trump personally instead of serving the interests of the American people. The Democratic Party leadership has signaled that they want irrefutable evidence out of the Mueller probe and broad Republican support before considering impeachment. No matter what comes out of the Mueller probe, however, it will come down to a political decision and a judgment call by Democrats. Given the high likelihood that President Trump will continue to enjoy strong support by Republicans, Democrats dead set on impeachment will probably be disappointed. However, this does not mean that the administration will not face serious pressure from Congress in all fronts, both in terms of congressional investigations and public policy.

Trump’s removal of the Attorney General Jeff Sessions and his replacement of Matthew Whitaker instead of Rod Rosenstein is instructive as the president wants the Mueller investigation to be neutralized, denying ammunition to the House Democrats. Democrats have been threatening to investigate Sessions’ replacement with Whitaker but it is not clear if they can prevent him from overseeing the Mueller probe in a way aligned with his public statements against the investigation. Clearly, this investigation has the potential to determine the relationship between the president and the House Democrats in the next two years. In all likelihood, the drawn-out process will make legislation extremely difficult, if not impossible. In that case, Trump may simply turn to foreign policy to win points in the eyes of the American public heading to the 2020 presidential election.

One obvious place will be the Middle East, particularly Iran. The administration already pulled out of the JCPOA and snapped back sanctions, issuing 6-month waivers to 8 countries including Turkey. Squeezing Iran and bringing them to the table on the administration’s terms seems to be the ultimate goal here, as is clear from the Secretary of State Pompeo’s article in Foreign Affairs. Iran will likely wait to see the results of the 2020 elections before committing to negotiations despite the harsh sanctions. In that case, Trump may try to exert more pressure on Iran with additional sanctions, perhaps refusing to extend further waivers to countries trading with Iran. Pushing against pro-Iranian forces in Syria, Iraq, and Yemen is another strategy the administration could pursue but so far Trump has not devised a comprehensive regional strategy against Iran. House Democrats have promised to investigate Trump’s relationship with the Saudis as well, which may limit his ability to increase pressure against Iran in the Persian Gulf.

Another foreign policy issue candidate to display strength and whip up domestic support would be North Korea. However, President Trump’s rhetoric on this one reached such heights in the past that a repeat of it would come dangerously close to war. Both Iran and North Korea issues carry the risk of escalation and miscalculations but Trump’s deeply anti-war agenda was part of how he won the presidency in the first place. If he comes too close to or engages in yet another war, he will lose domestic support even from his constituency. So far, President Trump has been able to shape or at least change the public debate whenever he wanted to a large extent. As he might seek to bolster his image abroad, the alliances and institutions he has attacked so far may not be there to help him. In that case, the unilateral action may be his only choice. The U.S. presidents have leaned on foreign policy issues when they felt trapped at home but that can have costly consequences at home as well.

President Trump has enjoyed Republican support in both houses of Congress until now, succeeding in cutting taxes, deregulation and Supreme Court appointments among others. In the next two years, he will be faced with a House intent on preventing his agenda and investigating his administration. As major legislation will be close to impossible to pass through Congress, he may choose to play his foreign policy card in the lead up to 2020. It is not clear if it will be enough, however, and he will have to play his hand just as well as the House Democrats.