On Wednesday US President Donald Trump announced Jerusalem as Israel’s capital. In the context of this decision, Trump stated that the US will relocate the US Embassy in Tel Aviv to Jerusalem – land that the UN Security Council has defined as “occupied” by the Israeli settlers. 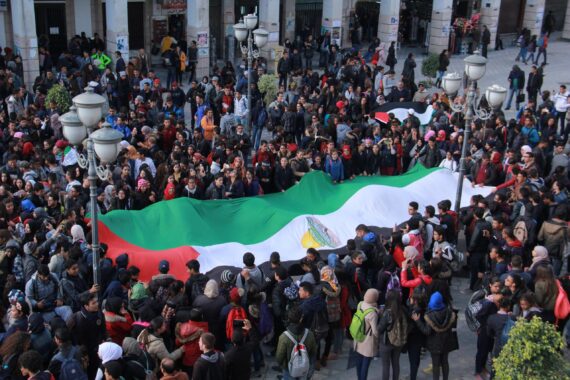 Demonstrators shout slogans, hold banners and Palestinian flags during a protest against US President Donald Trump’s recognition of Jerusalem as Israel’s capital, on December 07, 2017 in Sfax, Tunisia. Anadolu Agency

On Wednesday, US President Donald Trump announced Jerusalem as Israel’s capital. Trump stated that the US will relocate the US Embassy in Tel Aviv to Jerusalem – land that the UN Security Council has defined as “occupied” by Israeli settlers. Following his announcement, the US faced criticism from all over the world.

Speaking at the White House, President Trump did what his predecessors were reluctant to do in the past 20 years. As a historic and highly controversial move, the president recognized Jerusalem as Israel’s capital and announced that the US Embassy will be relocated from Tel Aviv to there. This inevitably marks the end of US neutrality on Jerusalem.

“Presidents issued these waivers under the belief that delaying the recognition of Jerusalem would advance the cause of peace,” Trump said.

“After more than two decades of waivers, we are no closer to a lasting peace agreement between Israel and the Palestinians,” he added. “It would be folly to assume that repeating the same exact formula would now produce a different or better result.”

“Therefore, I have determined that it is time to officially recognize Jerusalem as the capital of Israel.”

“I am also directing the State Department to begin preparation to move the American embassy from Tel Aviv to Jerusalem. This will immediately begin the process of hiring architects, engineers, and planners, so that a new embassy, when completed, will be a magnificent tribute to peace,” he bizarrely added.

While the US President claims that this is an approach which aims to speed up the “peace-process,” Trump’s decision has done exactly the opposite and has been harshly criticized from many different voices around the world.

Protests in the Middle East

Prior to the president’s announcement, leaders from the Middle East and Turkey have warned Trump that this decision would cause further instability in the region.

The move sparked fury among Palestinians, who immediately took to the streets in the West Bank and East Jerusalem – areas occupied by Israel – began protests by burning flags, pictures and chanting anti-American slogans.

Protesters also took to the streets in Istanbul, Amman (Jordan) and in Egypt’s capital Cairo.

The Palestinian Ministry of Education declared a day off for teachers and students, requesting them to rally and demonstrate in protest of the announcement in the West Bank, the Gaza Strip and Palestinian areas in Jerusalem.

On Thursday Hamas leader Ismail Haniyeh called for a new “intifada,” or uprising. Haniyeh urged Palestinians, Arabs and Muslims in general to hold rallies on Friday against the US decision, and called this a “day of rage.”

The spokesperson of Hamas said President Trump’s Jerusalem decision “will open the gates of hell on US interests in the region.”

President Erdogan continued to oppose President Trump’s decision, claiming that Jerusalem is home to the worshipping of Muslims, Christians and Jews.

He also stated that “these statements from Trump are serving only as a ‘mixer.’ It’s about mixing, not reconciling. If Mr. Trump says ‘I am strong, then I am right,’ he is wrong. Being strong does not mean being right. He should know that.”

While Presidential Spokesman Ibrahim Kalin announced that the Organization of Islamic Cooperation will come together in Istanbul on December 13 to discuss the future of Jerusalem, Pope Francis has also been invited to the meeting.

The issue of recognizing Jerusalem as Israel’s capital is not only a matter for Muslims, as the city is also home to Jews and Christians. According to sources from the Presidential Complex, Erdogan and Pope Francis agreed that “any attempt to change Jerusalem’s status should be avoided.”

The recognition of Jerusalem as Israel’s capital was the most discussed topic on social media – on Twitter, users reacted to Trump’s decision using various hashtags, including #KuduseSahipCik and #AlQuds.

US asks Israel to temper response to Jerusalem move

Amid these reactions, according to Reuters, a State Department document dated to  December 6, states that the US requested for Israel to restrain its response in regards to the recognition of Jerusalem as its capital.

“While I recognize that you will publicly welcome this news, I ask that you restrain your official response,” the document stated.

The release of this document to diplomats in the US Embassy in Tel Aviv is reflective of the fact that Washington expected a backlash, and illustrates that the US administration fears any potential threat to US facilities.

“We expect there to be resistance to this news in the Middle East and around the world. We are still judging the impact this decision will have on U.S. facilities and personnel overseas,” the document said.

Many political analysts noted that the last time such a document was released was just before the 2003 invasion of Iraq.

US embassies in the Middle East and Europe warned American travelers or people living there of the possibility of protests.

Right after minutes of Trump’s announcement, US embassies located in Turkey, Jordan, Britain and Germany issued security alerts urging Americans to be cautious of large surroundings and mass protests.

The US Embassy in Amman, was closed to the public on Thursday and banned employees from leaving the capital. While all Americans were advised to keep a low profile, children of embassy employees have been told to stay home.

Why and why now?

While there is a lot of focus on the outcry Trump’s decision has caused, there is not much about the reason “why” President Trump made this decision.

Only five days ago about 20 thousand Israelis had protested in the “March of shame” in Tel Aviv against government corruption and PM Benjamin Netanyahu, who is under criminal investigation over allegations of abuse of office and continues to deny any wrongdoing.

Netanyahu is suspected to have accepted gifts from wealthy businessman and negotiating a deal with a newspaper owner for better coverage in return for curbs on a rival daily.

For Trump this seems to be an important step towards gaining the sympathy of AIPAC and the Jewish lobby – supporters of his presidential campaign last year.

On top of the current discussions about Russian interference in US elections, sexual harassment scandals about Trump and the Michael Flynn-FBI case it seems logical that Trump tries to distract the public, while shining as a President who keeps his promises.

The mere fact is that the US, as a permanent member of the United Nations Security Council, tramples down the decisions made in the UN and thus opened the Pandora’s box.