Jerusalem has remained at the core of the Israel-Palestine conflict for decades, as Palestinians want Israeli-occupied East Jerusalem as the capital of a future state and Israel’s claim on all of the city is not recognized by the international community. 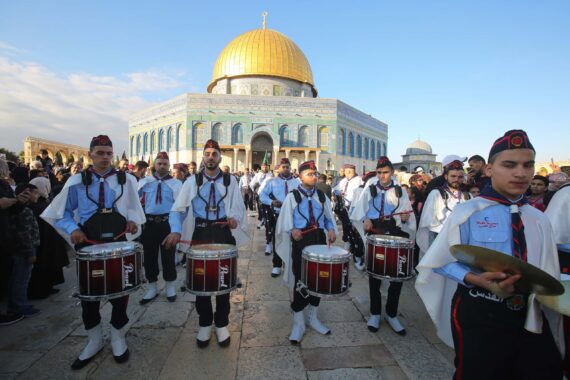 Palestinian marching band take part in a rally as they march to Al-Aqsa Mosque during the celebrations for Mawlid al-Nabi, the birth anniversary of Muslims' beloved Prophet Mohammad in Jerusalem on November 30, 2017. Anadolu Agency

In the past weeks, President Donald Trump was reported to be considering recognizing Jerusalem as Israel’s capital and moving the US embassy in Tel Aviv to Jerusalem.

However according to the White House President Trump postponed the announcement of the embassy and will –  while he signs a waiver to keep the US embassy in Tel Aviv for another six months – announce Jerusalem as Israel’s capital – a move long awaited by Israel.

Jerusalem is claimed by Israel as its seat of government. But since the international community sees it as an issue to be settled as part of a broader peace agreement, no foreign embassies are located in Jerusalem.

The announcement which was expected to be made this week followed the debates that started with first statements after Trump’s meeting with Israeli Prime Minister Benjamin Netanyahu before the presidential elections, and grew particularly intense in recent days.

A move by Trump to recognize Jerusalem will not only anger Palestinians but the broader Muslim world as well.

It is likely to completely halter the effort to restart long-stalled Israeli-Palestinian peace talks, while pleasing Israel and satisfying the pro-Israel base that supported him on his way to presidency.

Amid the recent reports of Trump’s consideration, Palestinian President Mahmud Abbas met with a delegation from the Democracy Front for Equality and Peace in Ramallah.

President Abbas warned the US that such a move would jeopardize the future of political process in the region and is unacceptable for Palestine as well as other Arab countries.

“Any step that the US takes to recognize Jerusalem as Israel’s capital or to move its embassy from Tel Aviv to Jerusalem would endanger the future of the political process,” he said during the meeting.

Hamas’ political chief Ismail Haniyeh also called for the unity among Palestinian groups against US’ move that was described as “very risky”.

Palestine’s official news agency WAFA reported on Sunday that the Palestinian leader has also spoken to many world leaders and sent statements to the African Union, the Arab League, Organization of Islamic Cooperation as well as the UN, the US, Russia, and the EU about the prevention of US’ plan to relocate its embassy in Israel which would “ax the peace process.”

Trump had first pledged to recognize Jerusalem as Israel’s “undivided capital” once he was elected, after his private meeting with Israeli Prime Minister Benjamin Netanyahu just before his first presidential debate with Hillary Clinton.

“Trump acknowledged that Jerusalem has been the eternal capital of the Jewish people for over 3,000 years, and that the US, under a Trump administration, will finally accept the long-standing congressional mandate to recognize Jerusalem as the undivided capital of the state of Israel,” his campaign office said in a statement.

With no reference to the pledge by Trump, a statement released by Netanyahu’s office read: “Prime Minister Netanyahu discussed with Mr. Trump issues relating to Israel’s security and its efforts to achieve stability and peace in the Middle East.”

When Israel captured the Arab eastern half of Jerusalem during the 1967 Arab-Israeli war and annexed it in 1980, it declared all of Jerusalem Israel’s unified capital.

Israel’s move was not recognized internationally – by states such as the United States and most other United Nations member countries.

Therefore, Jerusalem’s final status continues to be a key issue to be resolved in peace negotiations with the Palestinians.

During the presidency of Bill Clinton in 1995, the US Congress passed a law calling for the recognition of Jerusalem as Israel’s capital and the authorization of moving the US embassy from Tel Aviv to Jerusalem.

But no US president, Democrat or Republican, has implemented the law – insisting that it is a matter that must be decided in peace negotiations between the countries.

Instead, since 1998 every president has signed a waiver every six months in the name of national security upon seeing the complexity of the situation; so did Trump back in June.

Outcomes of a possible decision

Trump seems to have understood why his predecessors have signed waivers every six months instead of making the radical step of relocating the US embassy, a controversial step since the eastern part of the city is Palestinian territory being illegally occupied by Israel.

Jerusalem has remained at the core of the Israel-Palestine conflict for decades, as Palestinians want Israeli-occupied East Jerusalem as the capital of a future state and Israel’s claim on all of the city is not recognized by the international community.

However, even the decision to declare Jerusalem as Israel’s capital without ordering an embassy move, is expected to spark an international uproar especially in the Muslim world.

The president is surely aware of the damage to US relations with Muslim countries after a possible declaration.

The opposition against such a move has been loudest among the Arab leaders; some accusing the US President of “playing with fire” and Arab League Secretary-General Ahmed Aboul Gheit saying it will fuel “extremism.”

According to Reuters news agency, Jordan has begun consultations on convening an emergency meeting of the Arab League and the Organization of Islamic Cooperation before the US President’s recognition of Jerusalem as Israel’s capital.

Jordan is expected to invite members of the Arab League and the Organization of Islamic Cooperation to “discuss ways of dealing with the consequences of such a decision that raised alarm and concern.”