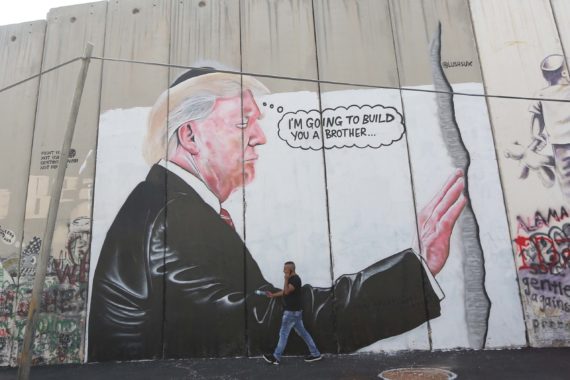 The Palestine issue is almost as old as the history of the current international order beginning with the establishment of the League of Nations to the creation of the United Nations. Throughout this turbulent century, no other event put to test the legitimacy and integrity of the international legal order more than the Palestinian issue. Due to making decisions contradicting their fundamental principles, by failing to implement decisions made, and on many occasions due to their ineffective stance on the issue, both the League of Nations and the U.N. witnessed the poisoning of the grounds their legitimacy was built upon. A look through history reveals that the U.K. and the U.S. have been the most influential actors that contributed to this process. Trump’s decision to recognize Jerusalem as the capital of Israel and to move the U.S. embassy from Tel Aviv to Jerusalem is the latest development within this historical chain of events.

Elaborating first upon some points regarding the history of Jerusalem and the occupied territories and then Trump’s decision will help clear the picture before us. By the end of World War I, by refusing the “right of conquest,” allied powers found themselves foreseeing a future global order built upon the principles of self-determination and non-annexation, which led to the League of Nations Mandates – the temporary administrators of territories entrusted to them through the League of Nations. While these mandates were not the sovereign rulers of their respective territories, their responsibility was to oversee the development of the nations they governed so that they could come to the stage of “self-determination.” The integral logic of this system was rendered contradictory on day one through the decision to add the Balfour Declaration to the League of Nations mandate for Palestine. The “self-determination” principle was built on the axiom that the inhabitants of any region were the rightful owners of their own sovereignty. However, in that case, wouldn’t moving people en masse to a country, without the consent of its inhabitants, infringe their right of self-determination? The report published by the U.N. Special Committee on Palestine, which was founded during the time when the end of the Palestine Mandate was being discussed in the U.N. in 1947, rightfully highlights this contradiction.

The contradictions proved to be endless. Until we even come to the current situation, the barrage of unimplemented U.N. decisions on Palestine and Jerusalem have eroded the legitimacy of the organization. The borders drawn by law have been retracted periodically according to the “reality” of the power balance in the region. The current framework for this discussion is the U.N. Security Council resolution, which demands Israel to stop its occupation in all territories captured during the 1967 war, including East Jerusalem. After the Palestinian National Council accepted resolution 242 and a two-state solution on 15 November, 1988, this resolution has been the reference point of Palestine-Israel peace talks for the past 20 years.

This process was also eroded due to the production of “new realities” in the field. On all the important points that Israel predicted would be discussed during the Oslo process, Israel first sought to build its position and later ensured its legal ground. The wall that runs through the occupied territories and the ever-increasing number of settlers fortify Israel’s demand on the borders that it insists on.

Thus, Israel’s decision to declare Jerusalem as its capital brought resolution 478 of the U.N. Security Council from 1980 into its list of “targets of erosion:”

“… all legislative and administrative measures and actions taken by Israel, the occupying Power, which have altered or purport to alter the character and status of the Holy City of Jerusalem, and in particular the recent “basic law” on Jerusalem, are null and void and must be rescinded forthwith;

…Those States that have established diplomatic missions in Jerusalem to withdraw such missions from the Holy City;”

Israel however did not comply with this resolution but rather sought courses of action intended to strengthen its position via changing the demographics of Jerusalem by using illegal settlers and seeking international backers. During the first act of the Oslo process, the U.S. Congress passed the now famous “Jerusalem Embassy Act.” The following day, during a speech made in Washington, former-Israeli Prime Minister Yitzhak Rabin said: “In Israel, we all agree on one issue: the wholeness of Jerusalem, the continuation of its existence as the capital of the State of Israel. There are no two Jerusalems. There is only one Jerusalem. For us, Jerusalem is not subject to compromise, and there is no peace without Jerusalem.”

Ten days after this speech Rabin was assassinated by a Jewish student who found the former prime minister’s policies to be too concessive. Nevertheless, following Bill Clinton’s refusal to sign the Jerusalem Embassy Act, its application was continuously postponed by U.S. presidents who used the power of a waiver. This was the case until Trump’s decision, which resulted in one of the biggest losses of prestige in the diplomatic history of the U.S.

Widespread support for Israel among Christians in the U.S.

It is possible to analyze Trump’s decision through two main related viewpoints. We can observe how the Palestine-Israel conflict is viewed in the U.S. by analyzing how the deeply-rooted historical beliefs and sociological dynamics there intersect with the current struggle for power in Washington. “Christian Zionism,” which has under its effect a wide proportion of the conservative American Protestant population, provides a natural supporting ground and electoral base for the pro-Israel U.S. politicians who support Israel’s stance on Jerusalem and the occupied territories. Christian Zionism is built upon a particular interpretation of verses in the Bible which are concerned with the end of the world. This interpretation stands in direct opposition to another Christian viewpoint that has been accepted for many centuries and which views the exile of the Jewish people from Jerusalem as “divine retribution,” and refuses their right to return. Christian Zionists however believe that before the second coming of Christ, Jewish people will gather in Jerusalem. According to them, this process will trigger a war that will involve the whole world and by the end of this war Jesus Christ will return to Earth and build the “Kingdom of God,” which will last for 1000 years – then, the world will come to an end.

Research conducted by PEW in 2016 contains indicators that will help us quantify the effects of such beliefs in American politics. According to a questionnaire conducted, 40% of American Jews support the statement that “Israel is given to Jews by God,” while the same statement is supported by 82% of American Evangelical Christians. According to the same source, White Evangelicals compose 26% of the U.S. electorate and 81% of them voted for Trump in the latest presidential elections.

The statement made by John Hagee, the founder of Christians United for Israel, following Trump’s decision to move the U.S. embassy to Jerusalem concludes this picture:

“…I told him that God measures everything in modules of 50 years,”

“Thank God, he’s going to do exactly that.”

The effect of the Israeli lobby

Another important part of the equation is the famous Israeli lobby. As illustrated in the book called The Israel Lobby and U.S. Foreign Policy, which is published in 2008 and written by John Mearsheimer and Stephen Walt, this power-structure is everything but a conspiracy and is as powerful as commentators suggest. We know that Trump promised Sheldon G. Adelson – an important donor of the GOP – that the U.S. embassy in Israel would eventually be moved to Jerusalem. Morton A. Klein, head of the Zionist Organization of America, was aware of this promise. Trump is currently going through a critical period in regards to the future of his presidency due to the allegations of collusion between his campaign team and Russia during the election. The U.S. Congress is one of the places in which the Israeli lobby is the most powerful, and would undoubtedly play a critical role during a possible impeachment process.

When assessing the Jerusalem decision from a second viewpoint, we find indications of new alliances formed in the Middle East. It is a well-known fact that countries that consider Iran’s advancements along the regional belt of uncertainty as direct national security threats – mainly Israel and Saudi Arabia – are getting closer to each other. This new climate in the region may have raised hopes for some that the political reflexes regarding the Jerusalem issue may have been getting weaker, or that some direct negotiations may have been made. However, the extraordinary summit of the Organisation of Islamic Cooperation (OIC) called by Turkey gave Arab leaders a clear opportunity to re-consider the consequences of failing to take action. How will the vote made in the U.N. General Assembly, which has always lumped the U.S. together with Israel whenever the latter would be considered, affect the plans and preparations for the region’s future? We can be certain that the answer to this question will raise the most curiosity in the Middle East for the following period.