Trump’s Executive Order to Institute Sanctions Against Iran: Are They Back on the Rails? 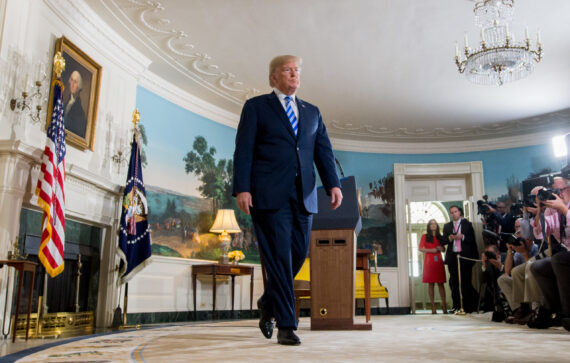 U.S. President Donald Trump leaves after announcing his decision about the nuclear deal with Iran during a speech from the Diplomatic Reception Room at the White House in Washington, DC, May 8, 2018. Getty Images

On August 6, 2018, U.S. President Donald Trump signed a new Executive Order named “New Iran E.O.” in order to re-impose sanctions. On the day the U.S. announced its withdrawal from the JCPOA, the U.S. Department of the Treasury determined two different ‘wind-down’ periods to indicate that the sanctions will gradually enter into force. Offering only one piece of the sanctions, the Executive Order aims to target companies that do business in different sectors that are central for Iranian business, such as the automotive sector. The other portion of the sanctions will come into effect on November 4, 2018 – the end of the 180-day wind-down period.

It is fair to state that the Trump administration is desirous of punishing the Iranian regime. However, the administration’s tough stance is, in fact, twofold. By framing a ‘zero’ policy, the U.S. administration not only intends to strain the financial capacity of the Iranian government, but also demands other countries to reduce their exports from Iran to zero. At this point, it is significant to differentiate sanctions as primary and secondary, of which the latter will indirectly and potentially treat U.S. allies as suspects of violating the sanctions.

When U.S. National Security Adviser John Bolton said that the administration intends to “say no waivers” in order to go beyond “where the sanctions were in 2015,” the administration apparently set the bar relatively higher than previous international sanctions. However, this zero policy can bring certain paradoxical consequences. If this policy will be a genuinely zero policy in the sense that the goal of the U.S. administration is to give irreparable economic harm to the regime, it needs to avoid using waivers to specific countries. Otherwise, the financial structure of the regime will be able to take a breath through the payments made by these countries that are awarded these waivers. In this first scenario, the collapse of the government, if very much desired by the administration, hardly appears in the short term. Therefore, the tough stance on the Iranian administration becomes questionable.

While the zero policy might appear as the only option for Trump, who is keen on bringing the Iranian government empty-handed to the negotiation table, the legal, political, and economic aspects of this policy are troublesome. Especially, in the global trade of crude oil, experts argue that the zero policy can force a significant amount of oil out of the market, leading to a drastic price change because of the high global demand for oil. In order to seek for a plausible way to minimize market disruptions to augment production, President Trump has approached  other allies such as Saudi Arabia. It remains difficult to assess to what extent juggling the production capacities of partners remains an effective plan. On the other hand, President Trump bemoaned the so-called “OPEC Monopoly” for raising oil prices. This implies that he can easily find a way to remove his guilt for the long-term high market price of oil.

The more difficult challenge is related to the political outcomes of the decision to impose sanctions against countries. For instance, many major oil exporters from Iran are EU countries, Turkey, India, China, South Korea, and Japan. Unless they change their oil trade routes, they can be caught by secondary sanctions. The potential effect of the sanctions can be far-reaching, reaching U.S. allies, great powers, or developing countries. Furthermore, Iran’s geopolitical position, integrating the Middle East and Central Asia, will complicate the attempts made by neighboring countries such as Turkey to cut trade with Iran. This might obstruct the implementation of the zero policy if these neighboring countries prioritize their own economic and commercial interests in trading with Iran, rather than following the Trump administration’s demand to cutting all imports of Iranian oil.

The new Executive Order leaves many questions unanswered. The prime one is whether the U.S. would issue waivers from the sanctions if requested by its allies, which are unwilling to jeopardize or deteriorate their bilateral relationships with the U.S. Brian Hook, a senior State Department official, told reporters that the administration would consider waivers based on “case-by-case.” While this revives the hopes for many countries, it also brings to question the intended harsh effect on the Iranian regime.

The paradoxical situation is unlikely to be clarified in the future due to the fact that, just like the process in 2015, the current process is not clear. Unlike the current procedure, during the 2015 process, P5+1 countries sat at a table with Iran and the sanctions that were to be lifted were predictable. Nevertheless, receiving a waiver will be contingent on the negotiations to be held between the U.S. and its allies such as Turkey. For this reason, it would be beneficial for the two countries to solve existing problems rapidly and expediently in order to condense all of their focus on the future of sanctions that will come into full effect as of November 4.