Trustee Appointments in Diyarbakır, Van, and Mardin: A Look at Party Responses

The reflections of Turkey's opposition parties on the appointment of trustees replacing the HDP mayors of Diyarbakir, Van and Mardin may point to the future directions of these parties in their domestic political agendas. 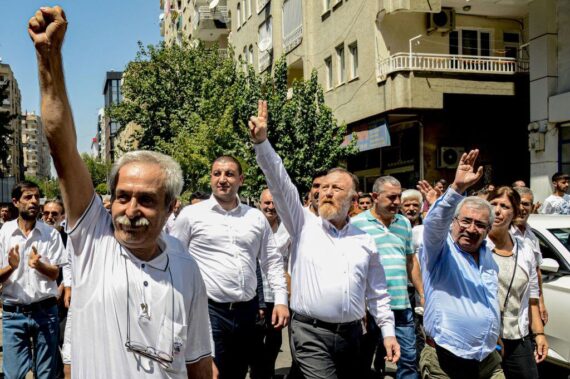 Co-leader of the HDP Sezai Temelli (C) and ousted Mayor of Diyarbakir Adnan Selcuk Mizrakli (L), rise their hands during a protest against the replacement of HDP mayors with state officials in three cities, in Diyarbakir, on August 20, 2019. Getty Images

The Turkish Ministry of Interior announced that the mayors of Diyarbakır, Van, and Mardin were discharged because of their engagement with the PKK terrorist organization. According to the Ministry’s official statement, the mayors are being charged with: re-employing former municipal employees who have been dismissed due to their liaison with the PKK terrorist organization; allowing persons to illegally work in municipalities, persons who were formerly elected as municipal councilors from the HDP but were not given the official mandate because of their affiliation with the PKK; naming streets after PKK terrorists; allowing the PKK march to be performed in official meetings of the municipalities, and changing the administrative structure of municipalities by appointing co-chairpersons that, by rule, breaches the current administrative law.

Based on these grounds, three mayors; Ahmet Turk of Mardin, Selcuk Mizrakli of Diyarbakir, and Bedia Ertan of Van, were discharged and the governors of these provinces were appointed as new mayors. Since this issue is currently at the top of the agenda for all political parties, it is crucial to evaluate how they reflected this incident and why they reacted differently.

It is possible to classify the reactions to these developments into three groups: supporters consisting of the AK Party and the MHP, opponents consisting of the CHP and the HDP, and the relatively-neutral Iyi Party. The supporters of this decision underline that it is crucial for Turkey to strengthen the fight against terrorism. In accordance with this aim, Turkey should not allow any activity supporting terrorist groups or legitimizing their existence.

Even the opponents of the trustee appointments do not deny the affiliation between the HDP municipalities and the PKK.

“We will not allow any money of Turkey’s people to go to terrorist organizations. And we will not sit back and watch those, who use the money of our people to help terrorists,” stated President Erdogan.

Indeed, even the opponents of this incident do not deny the affiliation between the HDP municipalities and the PKK, since the HDP itself does not hide this. One of the most concrete examples of this affiliation was during the official inauguration ceremonies of these municipalities. During the official ceremony in Diyarbakir, the national anthem of Turkey was not allowed to be sung, and instead the PKK’s march was performed. Furthermore, a moment of silence for dead PKK members took place. Relatives of people killed by the PKK were also fired in all of these municipalities.

On the other side, the opponents of these developments state that the trustee appointments are against the democratic rule and the will of the people. CHP officials visited the discharged mayors and showed them their support. The party underlines that these mayors should not be discharged without a judicial decision. Indeed, this process seems to have resulted in a further rapprochement between the CHP and the HDP since the reaction of both parties to this issue are the same.

Nevertheless, the CHP’s alliance partner Iyi Party stayed relatively neutral during the process. Unlike the CHP’s Chairman Kılıçdaroğlu, the Iyi Party’s leader Meral Akşener did not make any comments.. Nonetheless, the Iyi Party’s spokesperson made an official statement and underlined that although respect for the will of the people is crucial for democratic rule, affiliations with terrorist activities and organizations should not be allowed.

Iyi Party’s relatively neutral stance and the further rapprochement between the CHP and HDP on this issue might be signaling a change in the balance of power among the CHP-HDP-Iyi Party political bloc. Thus, the reflections of Turkey’s opposition parties on the appointment of trustees may point to the future directions of these parties in their domestic political agendas.