Tunisia in a Predicament: Echoes of the Tunisian Revolution Lingering

Blaise's aphorism that 'frustration at that failure has no more gruesome expression than Tunisia’s tide of self-immolations' (Blaise, Self-Immolation, Catalyst of the Arab Spring, Is Now a Grim Trend) evokes that optimism vis-à-vis Tunisia is sometimes uncalled for and calls of successful democratic transition is probably a paradox. 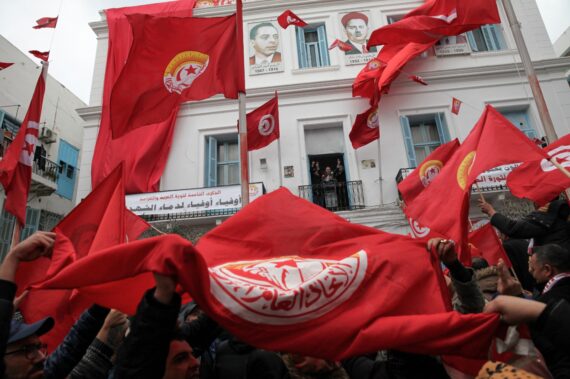 Unionists wave flags of Tunisia and flags of the Tunisian General Labour Union (UGTT) as they attend the speech given by Noureddine Taboubi, the general secretary of the UGTT, during the celebrations of the 8th anniversary of the Tunisian revolution day, held outside the headquarter of the UGTT in the capital Tunis, Tunisia, on January 14, 2019. Getty Images

Tunisia recently marked the 8th anniversary of the revolution, a powerful wave of popular protests that inspired other Arab countries to reform their socio-political and economic institutions, and therefore, establish an accountable government. Despite witnessing a peaceful democratic transition however, Tunisia is still failing to improve its economy, security, and social conditions – especially failing in improving its conditions for the young, who played the role of vanguard during the revolution and who now feel extremely dejected. Despondency and desperation is leading the Tunisian people towards agitation, the consequences of which can be fairly dangerous and damaging.

Eight years has passed since the revolution that brought an end to the 23-year rule of Bin Ali; the incidents of protests, self-immolations, and security failures have hit the country more frequently and have become a regular fashion. Abder Razak Zorgui, a 32 year old photojournalist from Kasserine is the latest example in the line of self-immolation episodes. Before setting himself on fire, he recorded a shocking video and posted it on social media, highlighting the sufferings of the people of Kasserine, who according to him are unemployed, jobless, with no means of survival and therefore are dying of hunger. Deciding to put a revolution in motion, in his emotional farewell, he stated that he’d be satisfied if only one person got a job due to his action.

Despite witnessing a peaceful democratic transition, Tunisia is still failing to improve its economy, security, and social conditions – especially for the young, who played the role of vanguard during the revolution and who now feel extremely dejected.

Zorgui’s act reflects the frustration that has been escalating due to the broken promises of the successive governments, which have miserably failed to bring tangible improvement to the socio-economic and security conditions in Tunisia, let alone political stability. It also refreshed Mohammad Bouazizi’s incident of setting himself on fire to protest against corruption, justice, and miserable social conditions, which provided the spark that dramatically ignited and inaugurated the popular Arab Spring uprisings, disturbing the political situation, political culture, and security situation across the Arab world.

Tunisia, the cradle of the Arab Spring, seems to be the only promising country hitherto showing the best prospects of a credible democracy and long-lasting peace and prosperity in the Arab world because of the positive and pragmatic consensus of political leaders and the constructive role of civil society. For these and many other reasons, the Washington Post highlighted that ‘Tunisia is the apparent anomaly in [the] Middle East’ (Jackson Diehl, Tunisia boldly embraces democracy). However, it is quite unfortunate that Bouazizi’s self-immolation act has become a routine in the country. Statistics about this dangerous trend reveal that from December 2010 to December 2018 about 300 people have committed self-immolation, in addition to 2000 failed attempts.

Bouazizi’s self-immolation act has become a routine in the country. Statistics about this dangerous trend reveal that from December 2010 to December 2018 about 300 people have committed self-immolation, in addition to 2000 failed attempts.

Zorgui’s death has once again led to a flood of protests in several cities, including Tunis, over the government’s failure to address the demands of the people and improve their living conditions. Since the revolution, the number of protests have been on a rapid rise. These numbers increased from 1000 in 2014 to at least 11,000 in 2017. The backlash has invited a large number of Tunisians to take some tough decisions, including abandoning the country to work abroad, and more importantly, joining groups such as Daesh and Al-Qaeda, amounting to serious security challenges for the government. Consequently, the strong presence and power of such elements in Libya and other places, with which the country has close proximity with, remains a source of headache for the Tunisian government.

Therefore, in addition to the economic challenges and jobs created for the educated youth, the security challenges loom large in the government’s engagements, given the sporadic security incidents taking place in the urban, suburban, and along the borders with Algeria and Libya. In the ensuing chaos and amid the emergence of Jihadi groups, Tunisia has seen a proliferation of militant attacks since the revolution. In 2013, two leftist political figures, Chokri Belaid and Mohammad Brahimi, were assassinated, and this virtually plunged the country into a serious political crisis. The country encountered a series of such attacks in June 2015, the most disastrous being the attack at a tourist resort near Sousse, which left 30 dead and many injured, most of them being foreign tourists. Similarly, last October, a 30 year old suicide bomber denoted her explosives near a shopping center on the busy Habib Bourguiba Avenue in the capital Tunis, wounding 8 policemen and a civilian. And the list goes on.

After the fall of Bin Ali, various political groups in Tunisia made huge strides through an uncomfortable atmosphere, which was filled with suspicion, polarization, economic and security issues. It has conducted relatively fair and successful presidential, legislative, and municipal elections. In 2014, it also witnessed the establishment of a grand coalition and power sharing that lasted until September 2018, between two ideologically opposite groups – the Islamic party of al-Nahda and the secular party Nida Tounes. While traversing this difficult path, the Tunisian national Dialogue Quartet was not only extensively lauded but was also awarded the Nobel Peace Prize for its crucial negotiating role among various parties and for “ensuring that the benefits of the Jasmine Revolution have not been lost.” Given the difficult circumstances that Tunisia is facing, these were huge steps that brought political stability and a peaceful transfer of power in the country.

Blaise’s aphorism that ‘frustration at that failure has no more gruesome expression than Tunisia’s tide of self-immolations’ evokes that optimism vis-à-vis Tunisia is sometimes uncalled for and calls of successful democratic transition is probably a paradox.

However, this political stability and consensus now seems fraying and fragile. Self-immolation incidents are common, protests are widespread, inflation is rising, unemployment is increasing, and the value of the dinar is declining. More importantly, the tolerant attitude towards the dissent and opposition is also waning. To this agony, add the ongoing fight between the Prime Minister Youssef Chahed and Nida Tounes, the latter demanding Chahed’s resignation. With parliamentary and presidential elections around the corner, the political situation is likely to worsen further with political parties getting engaged in political maneuvering.

From security challenges to economic crisis and acute political situations, a huge threat lingers over Tunisia, despite being praised as a symbol of enlightened democracy with an enlightened constitution in the Arab world. All these factors are endangering the peaceful democratic transition and are giving rise to an increasing number of questions. Is Tunisia still in a predicament? Are the echoes of the revolution still lingering? Will elections be held on time? Will the economic, social, and security conditions improve? All appears in doubt. In short, Blaise’s aphorism that ‘frustration at that failure has no more gruesome expression than Tunisia’s tide of self-immolations’ (Blaise, Self-Immolation, Catalyst of the Arab Spring, Is Now a Grim Trend) evokes that optimism vis-à-vis Tunisia is sometimes uncalled for and calls of successful democratic transition is probably a paradox.