"Deccani Souls", "The Battle of Algiers" and "Staging a Revolution" remind us that contemporary Turkey also has a Muslim soul that is able to resist attempted militarized coups and the global hegemony. 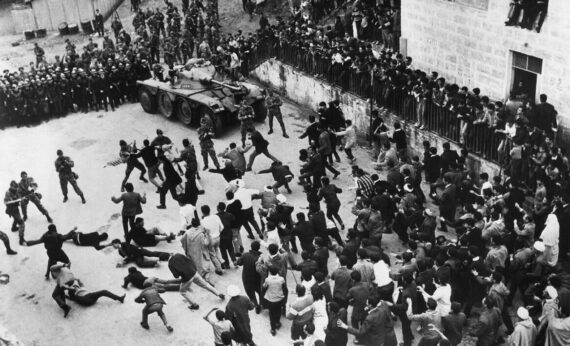 A strange feeling came over me in the late afternoon of July 15th- a reverie about greyish smoke engulfing my apartment and neighbourhood. On a local playground I saw bizarre behaviour and creatures I had not seen in over two years of regular strolls there- two unknown black dogs with viscous teeth ate a meal of grass, buried part of my son’s plastic tractor in the ground and then sat on top of the slide like they were waiting for something.Several hours later I heard a disturbing TRT broadcast that there was a military curfew and the government had been deposed in the name of ‘secularism’ by a ‘peace council’. I leaned out the back window of my Üsküdar apartment on the Asian side of Istanbul and felt the foreboding air. It is often said that culturally we are so inundated with media and popular culture that when something significant happens we scramble to make cinematic and artistic references-  ‘it was like a movie…’ or ‘it was surreal…’ Being a filmmaker and artist I thought of three audio-visual references as the night unfolded and which have socio-political and cultural resonance with what transpired in Istanbul and Ankara.

My film Deccani Souls (2012) includes dreams, memory and emigration as themes and the specific undercurrent of the story is the invasion of Hyderabad State by the Indian Army in 1948. This happened one year after the partition of British India into Muslim majority Pakistan and Hindu majority India. Hyderabad State and Kashmir were princely states which were given the choice to go to either country or stay independent. Hyderabad State was ruled by the wealthy Nizam Mir Osman Ali Khan (the richest man in the world according to Time magazine in 1937) from the Asif Jahi dynasty. Music, cuisine, academics, architecture and Quranic translation and interpretation were just some of the areas he successfully patronized through the 1920’s, 30’s and 40’s and after the collapse of the Ottoman Empire many Turkish and Arabic scholars, academics and intellectuals came to his court.

This late ‘Islamic’ flourish ended abruptly with ‘Operation Polo’ in September 1948. Over a few nights the Indian Army invaded and bombed the airport in Bidar and other outlying districts of the city of Hyderabad (the entire State was 212,000 km²) and the Nizam was forced to sign a surrender in a humiliating photo that is hauntingly etched in the psyche of that now dying generation of Hyderabadi Muslims. Later the famous library at Osmania University would be ransacked and ‘retribution’ killings against Muslims in the districts would be incited by the Indian Army and leave over 200,000 dead.

This is a story I have known since childhood as my family was directly affected; the film is my melancholic artistic expression about what happened in the aftermath of the invasion and an attempt to reclaim a shadow of the glorious cultural significance of the Deccan.

That night in Istanbul the sounds of the invading army, air force and gun fire in my fictionalized film resonated and mixed in my head along with the sound of shooting, explosions and deafening sonic booms. The potential catastrophe of a sudden loss overwhelmed me.

The influential film The Battle of Algiers (1966) by Italian director Gillo Pontecorvo re-creates epic battle scenes between the Arab population of Algiers and the ethnically French soldiers who control the movement, actions and outward behaviour of the society.  Anger rages on the streets and in the ‘casbah’ and the audience identifies with the guerrilla tactics of the FLN. The formal approach of the film is steeped in neo-realism with location shooting and some FLN members such as Saadi Yasef and the local population playing themselves. It also uses a grainy newsreel style of cinematography with high-contrast low-key lighting.

This is a key work in the history of cinema which converges the styles of Documentary and Fiction; it is also significant for its anti-colonial stance and empowering depiction of Algerian Muslims resisting the French cultural and political occupation of their land.

The spirit of this classic film converged with the real noise and resistance on the streets of Istanbul. I listened to the Mosques across the city frequently give the Azaan in-between prayer times and then recite empowering supplications in Arabic and brief instructions to resist in Turkish.

My friends described the atmosphere on the Boğaziçi bridge; a lot of young women chanting ‘Turks don’t back off…’ as they walked directly into the military coup’s fire before jumping to the ground.

Cheers erupted from the unarmed civilians when a tank-like ‘toma’ vehicle was blown up.

The book titled Staging a Revolution: The Art of Persuasion in the Islamic Republic of Iran (2002) edited by Peter Chelkowski and Hamid Dabashi sits comfortably in my personal book collection back in Canada but the content of the book showcases, summarizes and reflects the revolutionary zeal of the time.

The confidence in the destiny of the Iranian nation as it rose up and overpowered the Shah’s autocratic state while also calling upon their collective Islamic cultural history is shown through design that reflects a remarkable synthesis of classical, sacred subject matter and form with new materials, resources, formats and styles. Posters, banners, stamps, bank-notes, wrappers, murals and graffiti were all used just before, during and after this key period. Another notable comparison from this book are the early Soviet posters from the 1920’s and their powerful embrace and creation of a constructivist approach to Modernism to push their new message.

The revolutionary spirit of these posters and messages came to me upon hearing the calls of ‘Allahu Akbar!’ on the streets of Istanbul. Beyond ethnic, sectarian and political chasms the following days witnessed a mass celebration of flags and cheers across streets sometimes still scattered with tanks, overturned cars and the remnants of the failed coup. This was a resistance and reclamation of Istanbul, Ankara and Turkey which will have benefits for the culture of the Ummah around the world.

Much has been written about the fall of the Ottoman Empire and the 1923 rise of the secular nation state of Turkey; loss of a wounded Empire, reclamation and sovereignty of borders from the Allied powers, Turkification of the people and the legacy of an ongoing divide between secular institutions and mentalities and religious rights. However it is also useful to look at the resistance of July 15-16, 2016 as historically important in a global and cultural context. Deccani Souls, The Battle of Algiers and Staging a Revolution remind us that contemporary Turkey also has a Muslim soul that is able to resist attempted militarized coups and the global hegemony.