Turkey and African countries signed a joint declaration “to enhance lasting partnership between parties for development and economic integration” The declaration pointed out that the Forum emphasized a diversified and multilayered Turkey-Africa partnership. 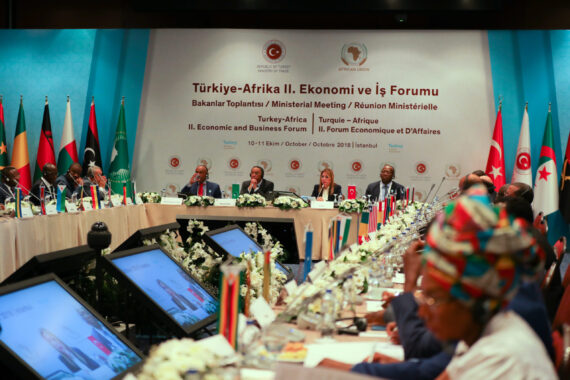 The Turkey-Africa Economic and Business Forum held in Istanbul this week has yielded fruitful prospects for reviving and strengthening the relations between Turkey and the multifaceted and rich continent of Africa.

The two-day forum which was held between 10th and 11th of October and organized by the Trade Ministry of Turkey and the African Union in collaboration with DEIK (Turkish Foreign Economic Relations Board) drew over 3,000 African and Turkish business-people from various sectors. The next forum is set to take place in 2020 according to a joint declaration that was signed at the end of the forum.

Speaking at the Forum during a ministerial and general secretarial meeting, Trade Minister Ruhsar Pekcan said that Turkey will be adopting a holistic approach to duly address the multicultural and multifaceted realities of Africa. “It is important to understand the realities of the continent’s countries by adopting a holistic approach to address the multiculturalism of Africa, rather than looking at a single window.”

Noting that her first visits after being appointed as the trade minister were made to countries in the African continent, namely South Africa and Zambia, Pekcan remarked that during these visits she had the opportunity to observe and comprehend firsthand “Africa’s great potential”. Underlining the need for strengthened relations, the minister noted that her wishes of “gathering with African representatives more frequently and holding consultations for developing trade and economic relations between the countries.”

On a similar note, the commissioner for economic affairs of the African Union Commission (AUC), Victor Harrison stressed the importance of collaboration in the pursuit of sustainable development. Underscoring the need for partnerships between the respective private sectors, Harrison noted that this was key to the development of the continent at large. Hopeful of the prospects that the forum would provide for the countries involved, Harrison noted “I believe that we will contribute to Africa’s development and will carry out beneficial discussions.”

On the last day of the forum, Turkey and African countries signed a joint declaration “to enhance lasting partnership between parties for development and economic integration.” The declaration pointed out that the Forum emphasized a diversified and multilayered Turkey-Africa partnership. The willingness to improve and boost economic and commercial ties was emphasized in the declaration which called for a joint action plan to assess the potential of lifting tariffs and other obstructions to trade.

The parties reached a consensus to form various partnerships in design, inspection, financing and the management of projects with the objective of cutting down on costs of energy and improving the access to electricity in the continent. It was also emphasized that reducing transportation costs, enhancing intra-African trade, facilitating food and water safety and advancing global connectivity were of significant importance.

The declaration called the involved parties such as the Turkish and African enterprises and financial institutions to action, encouraging them to expand investments and participate in infrastructure projects through Public-Private Partnership and Build-Operate-Transfer means in addition to other expanded forms of cooperation. Geared to build diversified economies both in Turkey and in Africa, the declaration prioritized sectors such as agriculture, electricity, aviation, maritime, education and healthcare.