In a joint conference held in Germany on Friday, President Erdoğan and German Chancellor Angela Merkel discussed bilateral relations. Both leaders announced that they have reached a consensus to revive bilateral cooperation mechanisms. 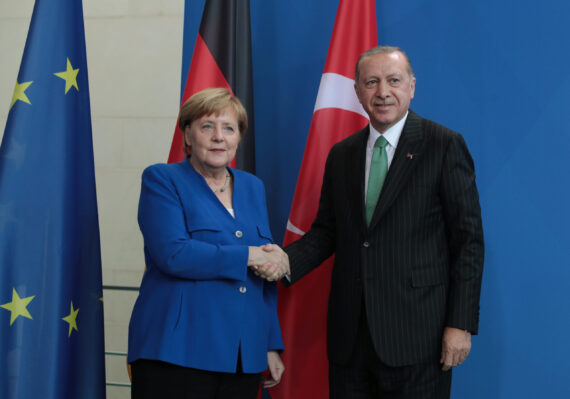 In a joint conference held in Germany on Friday, President Erdoğan and German Chancellor Angela Merkel discussed bilateral relations. Both leaders announced that they have reached a consensus to revive bilateral cooperation mechanisms.

Angela Merkel emphasized the crucial role lead by Turkey in confining the refugee influx, especially from Syria, to Europe which has been a focal issue for Germany and for which Merkel has been criticized severely. She announced that the Leaders’ summit on Syria is planned for October.

Merkel also highlighted the distinctive connection between the two countries on account of over 3.5 million people of Turkish roots in Germany. Acknowledging the rise of Islamophobia in Germany, Merkel said that the attacks on mosques were ‘unacceptable’.

Both leaders stressed the mutual economic significance of the two countries and their need for increased cooperation. Merkel stated that “Germany wants a stabilized Turkey with an economy that is permanently growing”

In a bid to improve bilateral relations, President Erdoğan said that “Turkey plans to fulfill remaining 6 criteria on visa liberalization as soon as possible”. President also stressed that Turkey has been effective in fighting terror and has also assisted Germany and addressed Germany’s expectations on this matter.

President Erdogan underscored that he expects the same sensitivity from his German counterpart and said that “thousands of PKK terrorists and hundreds of FETO terrorist organization members are living across Germany”. He stressed the threat of terrorism that these malignant groups have for both countries and said “Extradition of criminals is highly significant for the safety & peace of both Turkey and Germany”

Merkel answered this call ambivalently and said that “more information was needed on Gulen movement (FETO) in order to classify it as a terrorist group, like PKK” despite the fact that countless evidence and solid documents have been submitted to German authorities by Turkey clearly indicating the ties between FETO terrorist organization and the July 15th coup attempt of 2016.