Confronting each other in the power struggles taking place in Syria and Iraq, Ankara and Tehran have seen that the picture emerging while the cloud of dust spread by Daesh in Syria and Iraq is about to dissolve, constitutes a serious threat to both countries’ security-related interests. 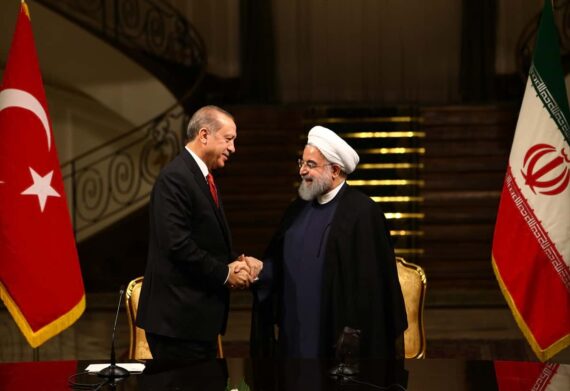 Turkish President Recep Tayyip Erdoğan’s latest visit to Iran put a spotlight on Turkey-Iran relations across the Middle East. Prior to Erdoğan’s visit, Iranian Chief of General Staff Gen. Mohammad Bagheri’s Turkey visit in August and Turkish Chief of General Staff Gen. Hulusi Akar’s return visit to Iran indicated that security issues stand out as the primary concern of the relations between two countries in the recent period. Bagheri’s visit was also significant since the military chiefs of the two countries had not visited each other since the Iranian Revolution in 1979.

The issues of Iraq, Syria and the outlawed PKK have been highlighted in these meetings between Turkey and Iran. Confronting each other in the civil wars and power struggles taking place in Syria and Iraq, Ankara and Tehran have seen that the picture emerging while the cloud of dust spread by Daesh in Syria and Iraq is about to dissolve, constitutes a serious threat to both countries’ security-related interests. This threat, which mainly consists of the PKK, its Syrian offshoot PYD and the Kurdistan Free Life Party (PJAK), is evidently jeopardizing the territorial integrity of Turkey and Iran aside from Iraq and Syria. Separatist pro-Kurdish movements started posing enormous danger to Ankara and Tehran as some circles in the U.S. and other Western states assumed that Turkey and Iran could be restricted, and possibly divided by supporting the PKK and its counterparts. This assumption shaped their policies regarding the Middle East.

The independence vote organized by the Barzani administration in northern Iraq also made it clear that this danger is not limited to the PKK and its counterparts. The acquisitions of pro-Kurdish movements in Iraq and Syria, thanks to the support given to them by some groups in the West in line with their Middle East policies, forced Turkey and Iran to set divergences aside and to cooperate on security issues. The recent visits paid by President Erdoğan and the two generals are required to be evaluated as steps taken in this respect.

While lately Turkey and Iran have been impelled to cooperate in the face of a common threat, security relations between the two countries have a problematic history. Although there has been no war for hundreds of years that redefined borders between the two countries, the relations between Turkey and Iran have long been strained. One of the main reasons for this tension is because Ankara and Tehran have accused each other of abetting terrorism: while on some occasions Turkey accused the Tehran administration of supporting the PKK, Iran on the other hand accused Ankara of siding with terrorist groups that pose a threat to Iran, for instance the People’s Mojahedin Organization.

Although Iran has had to fight against the PJAK, an offshoot of the PKK within its domestic boundaries, Tehran has been driven to adopt wrong policies with regard to its fight against terrorism, as it has occasionally regarded Turkey as a bigger threat than the PKK and PJAK.

More, Iran also followed policies that were interpreted as a support to the PKK by Turkey and abstained from siding with Ankara in its fight against the terrorist organization.

This stance is the mere outcome of not comprehending the fact that cooperating with Turkey, an important regional power in the Middle East, is key to becoming a global actor for Iran. Embarking on a power struggle with Ankara will only divert Tehran from this objective.

As the power struggle between two countries with regard to Syria and Iraq led to the consolidation of the PKK, which threatens both countries’ territorial integrity, they have been obliged to look for new ways of cooperation. Time will illustrate as to whether Ankara and Tehran will set aside their centuries-old lack of trust and manage to ensure a close alliance. The two parties do not need to experience a catastrophe similar to the World War II in order to lean towards a cooperation that is reminiscent of the France-Germany partnership. The turmoil caused by the Syrian and Iraqi civil wars and the growing threat of the PKK, PYD and PJAK as a consequence of the wars must be a sufficient reason for this cooperation.

The influence of the U.S. and Europe on Turkey-Iran relations

It must be underlined that the U.S. and other Western countries are very clear in their approach to Turkey-Iran relations. To sum up their approach, Washington and European capitals are not willing to leave the relations to their natural course by any means.

These countries regard the formation of any cooperation between Turkey and Iran that will establish an order in the Middle East as a massive threat against their interests and utilize every effort to hinder this.

Their efforts to prevent Turkey-Iran relations have succeeded on multiple occasions, and the pressure applied on Ankara in this respect has caused Turkey to step back. While there have been numerous impediments to the improvement of relations between Turkey and Iran stemming from both sides, the negative attitude of the West towards this bilateral relation has posed the greatest obstacle to the establishment of a healthy relation between the two countries.

As international relations necessitate states to follow developments that pose a potential threat to their own interests, and to take action when necessary to eliminate such threats without giving them a chance to grow, the U.S. and European countries who are influential within the international arena strictly follow the Middle East in order to prevent any developments that might threaten their interests. Within this scope, the primary subject they attach importance to is the prevention of any close cooperation between regional actors in the Middle East, which would encompass economic, political or security-related issues. This is a delicate issue for especially the U.S. and Europe since the regional forces in question can be said to have somehow problematic relations with the West.

Thus, viewed through the lens of the West, a possible cooperation between Turkey and Iran would have a different meaning from cooperation between Saudi Arabia and Israel or Egypt. Close cooperation between Ankara and Tehran unsettles Washington and European capitals to a great extent since both capitals have turbulent relations with the West. The indications of this disturbance have been visible especially in the “axis shift” rhetoric, which has been employed in several instances, including the times during President Turgut Özal’s efforts to establish an Economic Cooperation Organization (ECO) with Iran and Pakistan as an extension of his multidimensional foreign policy. More, this rhetoric was adopted during late Prime Minister Necmettin Erbakan’s initiative to found the D-8 (Developing-8) and to sign a comprehensive natural gas agreement with Tehran. A final example of the utilization of this rhetoric was during the years 2009-2010 when relations between the Justice and Development Party (AK Party) and Tehran were at their peak in terms of economic, politics and security-related issues.

One of the greatest impediments to the improvement of relations between Ankara and Tehran was the U.S. crackdown on Turkey at times she tried to contravene Washington’s policy of isolating Iran. Relying heavily on foreign sources to meet its energy need, Turkey signed an agreement in 1996 to annually purchase 10 billion cubic meters of natural gas from Iran with an aim to decrease its dependence on Russia. Upon this move, U.S. and Europe-based media outlets alleged that this agreement was a step to develop close ties with Iran, while the Washington administration listed BOTAŞ Petroleum Pipeline Corporation, Turkey’s state-owned energy company, among the companies subject to sanctions. Organizing relations with Iran on a rational basis, focused on economic cooperation and free of ideological and western influences during the AK Party period also heavily frustrated Washington.

Turkey’s reluctance to restrict economic relations with Tehran and desire to solve the nuclear program issue through diplomatic means intimidated the Obama administration, which has imposed heavy economic sanctions in order to end Iran’s nuclear program and attempted to subjugate the country with pressure of the Israeli lobby.

As a result, sanctions that would cover a number of Turkish companies and Turkish state-owned Halkbank came to the fore, while Ankara was compelled to keep pace with one-sided sanctions imposed by the U.S. on Iran. With the effect of this pressure, the trade volume between Turkey and Iran decreased below $10 billion respectively in 2015 and 2016. Today, it is crucial for both countries to resist the pressures of global actors in order to ensure that Turkey-Iran relations can flourish on a healthy ground.