Turkey should not expect other parties to understand and support responses to its own security threats. If Turkey enters into the field in Syria by using its hard power, this may change the game in its favor. 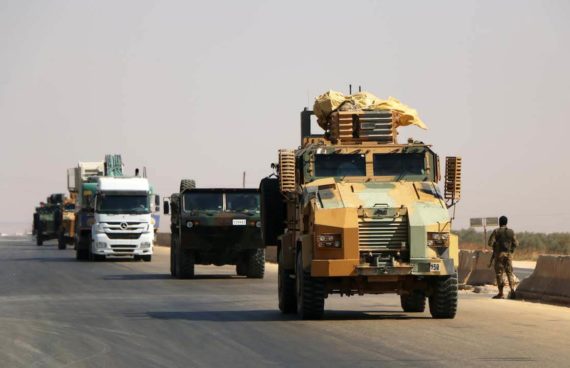 Since groups such as the YPG and the SDF, extensions of the PKK terrorist organization, have started to gain international legitimacy and dominance politically and militarily, the Syrian crisis has become not only a regional problem for Turkey, but also an internal security threat. These terrorist groups have been depicted in the Western media as “freedom fighters” with the claim that they were fighting against Daesh. In contrast, Turkey’s security operations were portrayed as “attacks against the Kurds”. These were the most obvious indicators of an extensive and long-term strategy adopted by some western “allies” risking Ankara’s national security.

During the civil war in Syria, opposition groups close to Turkey lost their power while the YPG, the Syrian branch of the PKK, gained territorial control. Turkey, in the meantime, was not free from an intermittently active FETO threat. A controversial event that took place before the July 15 coup attempt concerning the capture of National Intelligence Organization (MIT) trucks allegedly carrying weapons to Syrian opposition groups, illustrates how fragile Turkey’s possible security operations abroad could have been. Therefore, Turkey had to delay a real encounter in Syria and tried to resolve its concerns through diplomatic negotiations.

After the fall of Aleppo to the Syrian regime and the start of the Astana process, the volume of armed conflicts in Syria drastically decreased. This was caused by the strong military response by the US against several Syrian army initiatives east of the Euphrates, which kept the region out of active military operations. As well as the regime’s own relief regarding its future security.

Recent developments in both Idlib province and the Eastern Euphrates have created different security concerns for Turkey. In Idlib, immigration is a significant challenge while the possibility of the establishment of a YPG led state east of the Euphrates has been the main concern. Turkey has pursued diplomatic channels in Idlib by engaging with Russia and Iran.  However, despite the Astana process, regions in the east and south of Syria were seized by the regime without much resistance from the opposition. But the Idlib region on the border with Turkey was left aside because of Ankara’s sensitivity. However, all the efforts by Turkey to find a diplomatic solution failed and the Syrian regime gained control of the Seyhun region after intensive attacks in August. This lead to a large number of Syrian civilians moving close to the Turkish border. In addition to concerns over Idlib, Turkey has also pursued a proactive path regarding the developments in the Eastern Euphrates. Adverse developments in the region threatening Turkish national security led Turkish authorities to take concrete measures. The unfulfilled promises made by the US to Turkey as well as the robust evidence showing the US’s delivered weapons to the YPG caused serious disappointments. President Erdogan finally made a statement saying that “if concrete steps are not taken [by the US] to resolve our concerns, we will start the operation in the safe zone to the east of the Euphrates until the end of September”.

Changing the status quo in Syria

Iran has supported the Syrian regime since the beginning of the Syrian crisis. When it was transformed from a popular revolution movement into outright civil war, Iran was involved in direct clashes in Syria through its proxy forces and military advisers.  As a result, although Iran has suffered from significant military and economic losses, it has been the most decisive country in terms of supporting the survival of the Ba’ath regime. Helping the regime maintain control over 70% of the country. Recently, Iran has been trying to solidify its gains in Syria by signing long-term trade agreements with the regime. Therefore, it would not be realistic to expect Iran will reduce its recent political support of Bashar al-Assad.

A large area with strategic value in terms of natural resources and farmland is still controlled by US-backed separatist groups (such as YPG and PYD). The region is still the subject of international intervention. These factors have led to the Syrian regime and its main supporters to understand that main threats to its survival come from the US, and not from Turkey. This situation has led to the intersection of mutual concerns about the YPG between Turkey and the Syrian regime.

These developments coupled with Israel’s increasing attacks on Syria and Iraq, have played a role in reestablishing Israel, the US and their Syrian partners like the YPG, as the main threat to both the Syrian regime and Iran, rather than the Syrian opposition.

For example, if as claimed, unmanned aerial vehicles used in the attacks on the Hashd-i Shabi bases in Iraq were removed from the areas under the control of YPG. This shows that the YPG participated in the anti-Iran coalition in the region.

Iran has been subject to heavy sanctions for the past six months, and the serious decrease in oil sales to around 200,000 barrels per day since May has left it facing a deep economic crisis. The ruling elite of Iran has been trying to minimize the public impact of the crisis by using its limited foreign exchange reserves, but it cannot prevent the economic indicators from worsening day by day. Iran’s major trading partners, particularly China, India, and the EU have significantly reduced their trade with them, and the alternative payment instrument INSTEX, which European countries have committed to, is practically ineffective since it does not cover oil sales. In this isolated position, trade with neighboring countries such as Iraq and Turkey have gained vital importance for Iran.

For this reason, Iran is now working to reduce the impact of problem areas with Turkey, to minimize its participation in Idlib operations, and to soften the rhetoric against Turkey in the press. Indeed, some Iranian observers connect the attitude change of Iran to the critical importance of Turkey during this sanctions period. In an environment where an immediate solution for the nuclear crisis between the US and Iran isn’t expected, Iran is unlikely to react to Turkey’s operations against terrorist positions in its southern border.

Tehran’s unwillingness to respond to Turkey’s actions in Syria is likely influenced by the fact that the Ankara administration has not challenged the legitimacy of the Damascus regime for quite some time, arguing that a new system is only possible through joint negotiations between all parties participating in the Astana and Geneva processes. Therefore, Turkey’s operations to remove the YPG within a limited area, and to enable a significant number of the Syrian refugees to move back, will not violate Iran’s red line.

Turkey’s operations against YPG will most likely stretch Turkey-US relations even more. In recent years, the tension between Turkey and the United States has been welcomed by Russia and Iran. The stress in Turkey-US relations will be reflected in Turkey’s policy towards the region and Iran. If the US takes punitive steps towards Turkey, then Turkey will undertake its own countermeasures. For example, by showing less sensitivity towards the US’s unilateral sanctions on Iran. Such a situation would be an appropriate scenario for Iran.

The creation of safe zones by Turkey in agreement with the United States is the main problem for Iran. Because the Tehran administration is aware that the US and its regional allies pose the greatest challenge to its survival and its regional policies. If Turkey takes steps for its own national security rather than participating in the US-led coalition, this will be seen as a lesser evil.

Another reason that Turkey’s probable operations in Syria will pose less of a problem for Iran is related to the deepening cooperation of the PKK/YPG with the US instead of regional patrons. These groups are frequently mentioned in policies against Iran. As the summer has shown, although the US maintains its policy of maximum pressure on Iran, it seems unwilling to retaliate against Iran’s steps to escalate military tensions. Although the US   has relied on the Israeli air force in the region, the need for surrogate organizations will increase in the coming days. Therefore, Iran will not be disturbed by the weakening of the YPG, as a US proxy organization, adjacent to the Iraq-Syria border.

As a result, at the current stage of the Syrian crisis, Turkey has noted the failure of relying on diplomatic efforts. The countries that have influence over Syria and the armed organizations controlling some areas achieved these gains through direct military involvement, not through diplomatic negotiations. In such an environment, it was not a realistic approach by Turkey to expect that other parties would understand and support responses to its own security threats. From Iran to the United States, from Israel to Hezbollah, all parties have tested the nerve endings of each other and have opted for the most dangerous options. The lack of immediate action by Turkey may lead to the situation in Idlib expanding across the entire country, and Turkey’s already damaged reputation will be thoroughly questioned. If Turkey enters into the field in Syria using its hard power, it will be closely followed by other parties including Iran, but the only country that could demonstrate a practical response would be the United States.