Giving information about the IDP, Hajjar said that IDB partnered with COMCEC in order to address issues such as rapid population growth, climate change and spread of diseases. 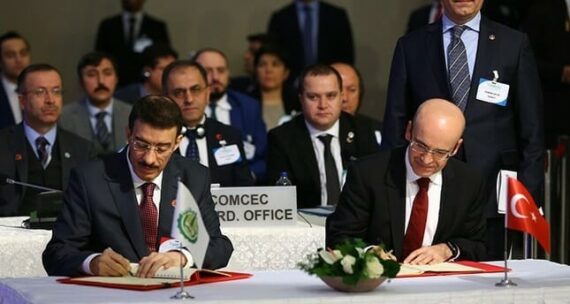 Turkey will receive 312 million euros and 200 million dollars. The maturity of the loan is 20 years, including a 5-year grace period.

Deputy Prime Minister Mehmet Şimşek and IDB’s President Bandar Hajjar signed the agreement during the 33rd Ministerial Meeting of the Standing Committee for Economic and Commercial Cooperation (COMCEC) of the Organization for Islamic Cooperation while Turkish President Erdogan was also present.

The loan will be used for the purchase of 10 high-speed train sets within the scope of the “106 High Speed Train Set-up Project” carried out by the General Directorate of Turkish State Railways (TCDD).

In the same ceremony, another agreement worth $200 million, which will be used in the financing of the “Clean Energy and Energy Infrastructure Program” was signed between the Development Bank of Turkey and IDB under the Turkish Treasury guarantee.

Giving information about the IDP, Hajjar said that IDB partnered with COMCEC in order to address issues such as rapid population growth, climate change and spread of diseases.

He added that to address the issue of youth unemployment a five-year program has been launched to improve cooperation between universities, research centers, non-governmental organizations and government departments.

As the highest ministerial platform for the Organization of the Islamic Cooperation (OIC) and the second largest inter-governmental organization after the UN – the COMCEC aims to improve economic and commercial relations among member countries.

The organization has its headquarters in Ankara and is chaired by Turkish President Recep Tayyip Erdogan.

It was established during the 3rd Islamic Summit held in 1981 and became operational in 1984.