Turkey and Russia Partners by Fate?

Russia is aware that Turkey maintains an independent foreign policy and establishing close ties with Moscow is beneficial to its interests. However, Russia also approaches Turkey with suspicion and intends to establish a strategy of balance. 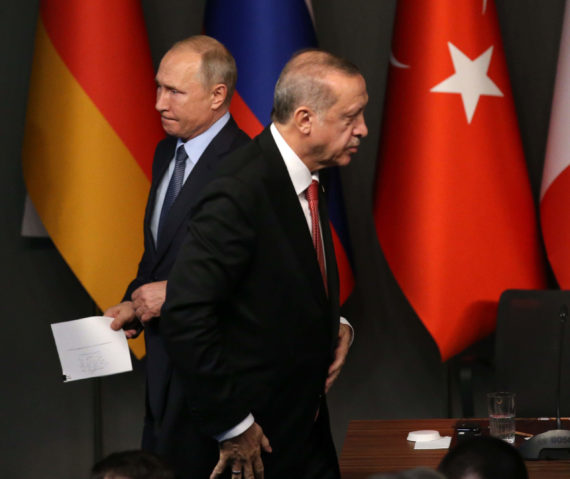 Russia’s primary global strategy is to become a great power and to establish a multipolar global order. Thus, Russia sees rivalry with the U.S. as inevitable to accomplish these.

The fact that Turkey is both a NATO member and a U.S. ally is one of the most important factors that determines the relationship between Ankara and Moscow. For Moscow, NATO is a vehicle for the U.S. to establish its global dominance and is a threat to Russia’s national security. Russia engages in a variety of strategies to balance or reduce the threat it perceives from the U.S. and NATO. One of these is establishing close relationships with countries that are members of NATO.

The fact that Turkey has the second largest military in this alliance introduces a new and distinct direction to Moscow’s policies towards Ankara. Turkey’s relative importance compared to other NATO members in the dimensions of geopolitical position, economy, human capital and military capabilities prompts Moscow to search for more methods of establishing closer relationships with Ankara. However, the aforementioned strategic capabilities of Turkey mean the emergence of a strong geopolitical rival for Russia at the same time. Russia that regards itself a “great power”, establishes relationships with other countries according to their status. It works to establish closer relationships with strong countries and perceives Turkey within this framework.

Turkey is both a NATO member and a U.S. ally and this is what mostly determines the relationship between Ankara and Moscow.

The fact that Turkey does not limit itself to an alliance with the West and the fact that Ankara maintains close relations with Russia and other Eastern countries by occasionally maintain a foreign policy that is independent of its alliance with the West is perceived positively in Russia. The fact that the Ankara administration places importance on its relationship with Moscow and does not display a radical attitude towards Russia like other U.S. allies is also perceived positively by the Russian administration.

By occasionally maintaining a foreign policy that is independent of its alliance with the West is perceived as proof that the Western alliance is not a monolith and that the divisions between the members of this alliance can serve Russian interests. Since the Western alliance fails to act as a single body, it becomes less of a threat to Russia, which is in a comparatively isolated position today.

Turkey, Russia and the West

According to Russia, a reason behind Turkey distancing itself from the West and becoming closer with Russia is the problematic relationship that it has with the U.S. and other European countries. Meaning that in some way, the worsening relationship between Turkey and its western allies opens room for development in the Ankara-Moscow relationship. This in turn makes Turkey and Russia “partners by fate.”

Turkey, which has been waiting to become an EU member for decades, does not trust the West anymore. Russia has also experienced a similar situation. Wanting to become part of the West following the collapse of the Soviet Union, Russia was continuously marginalized by Western countries and the promises given to Moscow were not kept. At the same time, this process resulted in the West approaching Russia’s borders close enough to become a threat to Russia’s national interests. Thus, the distrust that both Turkey and Russia hold against Western countries is based on justified reasons. According to Moscow, the one-sided policies the West maintains under Washington’s leadership are against Turkey’s interests as much as they are against Russia’s interests.

The worsening relationship between Turkey and its western allies opens room for development in the Ankara-Moscow relationship. This in turn makes Turkey and Russia “partners by fate.”

One of the main reasons for the deterioration in relations between Ankara and Washington is that the U.S. does not seek Turkey’s interests. The common opinion that the U.S. was behind the 2016 coup attempt in Turkey, the U.S. refusing to extradite the Gulenist Terror Group (FETO) leader Fetullah Gulen, its alliance with the PYD in Syria, the disagreement on the subject of the purchase of air-defense systems, and the U.S. introducing tariffs on Turkish iron and steel are the main subjects that have caused the relationship between Ankara and Washington to worsen. Thus, the deterioration of this relationship has led to expectations that Turkey will distance itself from the U.S. and draw closer to Russia. This situation is perceived by Russia as a crisis in the Western alliance and is considered a geopolitical loss for the U.S. In short, all developments against the interests of the U.S. are seen as in favor of Russian interests.

The intensification of the crisis in Syria, the U.S. stopping its support for the Syrian opposition and strengthening its cooperation with the PYD, and the separation of Ankara’s and Washington’s priorities in Syria forced Turkey to seek strategies alternative to the U.S. The balance of power in Syria shifted with Russia becoming directly involved in the conflict in September 2015 and the emergence of a refugee crisis following the military operations conducted on the border with Turkey, which left Ankara face-to-face with serious security problems. The main reason why relations between Turkey and Russia improved following the rapid deterioration during the “jet crisis” is that both actors need each other for the development of a solution regarding the Syrian crisis, which has become an international security problem.

The fact that Turkey and Russia, along with Iran, have come together to seek their common interests has been an important development for Moscow. The beginning of the Astana Talks following the failure of the Geneva peace talks and the fact that the parties managed to reach a consensus on the subject of security has led to Russia perceiving Turkey as an effective and constructive power as well as an irreplaceable actor. Russia has understood that the solution of the Syrian crisis and the presence and security of Russian forces in Syria is dependent on cooperation with Turkey to a significant degree. Turkey’s potential to greatly contribute to the re-building and development of Syria due to its significant influence over the Syrian opposition and its long border with Syria is an important matter from the Russian perspective. The successful diplomatic and military operations Turkey held during the Syrian crisis has also led to Ankara becoming a more important actor in the eyes of Moscow.

Another subject that has had a negative effect on relations between Turkey and the U.S. and which is also closely followed by Russia due to its involvement is the subject of the S-400 air defense systems. According to Russia, there are several reasons why Turkey wants to purchase the S-400 air defense system from Russia: The first is that the U.S. does not want to provide Turkey with the patriot systems. Secondly, not wanting to hand over its air space to the West, Turkey seeks to possess its own national defense system in the long-run. Finally, Turkey prefers the S-400 system over the Patriot systems due to its more advanced technology.

Stating that it can provide the weapons and technologies that the U.S. avoids giving to Turkey, Russia seeks to strengthen its relationship with Turkey in the field of military as well. Russia sees this relationship from two points of view: First is keeping Turkey, a NATO member, close to itself by distancing it from the U.S. The second is to create a market for its own military industrial complex. Russia knows that Turkey intends to establish a “relationship equilibrium” with Washington and Moscow and wants to be part of that equation. On the other hand, these intentions do not mean that they will comply with all weapons technology transfers requested by Turkey.

Another reason why Moscow wants to sell an advanced technology such as the S-400 to Ankara is that Russia has started selling these systems not only to Turkey but to other countries that wish to possess this kind of technology and have or intend to establish close relations with Russia. Furthermore, the existence of the S-500 defense systems that possess more advanced technologies compared to the S-400 systems and the continued work on the development of the S-600 systems opens the door for the delivery of the S-400s to Turkey.

While Moscow wants to establish close relations in the military-technical field with Ankara due to geopolitical reasons, it has certain hesitations. One of these is that Russia does not like the idea of Turkey increasing its power. This is because it considers the possibility of Turkey becoming a rival to itself. The second of these is the common opinion in Russia that due to Turkey’s NATO membership, its preferences will be more in line with this alliance rather than Russia.

Russia is aware that Turkey maintains an independent foreign policy and establishing close ties with Moscow is beneficial to its own interests and sees this as a geopolitical gain. However, the Russian administration also approaches Turkey’s policies with suspicion and due to this, intends to establish a strategy of balance.