Turkey Can Help the US Exit from Syria

Although the withdrawal remains unclear, the road-map for Turkey is clear. Firstly, as President Erdoğan proposed in his piece, Turkey propose a stabilization force to clean, hold and build the entire region in the eastern part of the river. 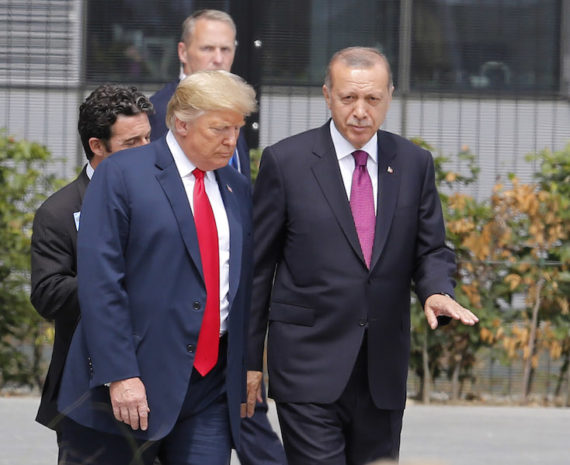 President Donald Trump’s recent decision to withdraw the U.S. forces from Syria was widely described as a gift to Turkey, Russia, and Iran and many politicians in the US were so quick to highlight that Ankara would be the only beneficiary of such a decision. Although it remains unclear how the US will withdraw from Syria, the recent visit of John Bolton to Ankara revealed that both countries have different strategic priorities concerning how post-American northern Syria will look like. At first glance, as Bolton and Pompeo strongly underlined, President Trump’s decision is definite, and the US will coordinate its withdrawal with Ankara. But dig a little deeper, the situation becomes much less clear and much less foreseeable not only in regards to Turkey’s militarily reaction but also for the maintenance of Turkish-American strategic cooperation in northern Syria.

From a strategic perspective, while Turkey wants to reduce the YPG presence wherever it is located, the US, including Trump’s himself, seems to protect YPG against Turkey’s upcoming military operation and to assure the long-term presence of PYD/YPG’s in Syria.

Because of many dynamics, the withdrawal decision might gradually turn into another political rift between Ankara and Washington. The reasons behind the puzzlement are multidimensional. After Trump has announced that the US would leave from Syria within 30 days following the phone conversation with president Erdoğan, he changed his original statement three times. Actually, 30 days was not realistic not only for the technical military aspects of the withdrawal but also to secure and coordinate the pullout of American troops from Syria. It was also not realistic to reach an agreement with Turkey during a given time frame. At this stage, Trump gave at least 120 days to complete the withdrawal process of the US forces. However, the time frame is the easiest part of the withdrawal. The problem here is the unclarity regarding the kind of agreement and cooperation that Turkey and the US will agree on.

Trump gave at least 120 days to complete the withdrawal process of the US forces. However, the time frame is the easiest part of the withdrawal. The problem here is the unclarity regarding the kind of agreement and cooperation that Turkey and the US will agree on.

It seems that there is also a dispute within Trump’s inner circle in which Bolton and Pompeo have some sort of strategic concern over the issue of withdrawal. Bolton said the planned US withdrawal of 2,000 troops from Syria would be contingent upon cementing an agreement with Turkey to protect YPG. Before his visit to Ankara, Bolton wrongly underlined that the US wouldn’t withdraw troops from northern Syria unless Turkey offers a firm commitment not to target local partners of the US. Pompeo, US Secretary of State, also reiterated that President Erdoğan made a commitment to President Trump that the YPG would be protected even though Turkey’s President never gave such a promise to President Trump. It seems that the YPG issue will be the epicenter of US withdrawal and upcoming negotiation between Turkey and the Trump administration.

President Erdoğan does not seem to accept any condition to secure the YPG’s presence, especially alongside Turkey’s Syrian border. It’s also not realistic to expect that Turkey would accept the PYD’s political participation into any institutional mechanism.

The debate over Trump’s decision has not limited the question of how the US will protect YPG. The probability of the resurgence of the Daesh in northern Syria is another yet highly controversial subject which Trump’s inner circle also wants to sustain to fight against Daesh. Even though Trump declared a military victory against Daesh in Syria, his team does not have the same idea since the military victory over DAESH does not necessarily mean it is defeated completely. Therefore, maintaining the fight against DAESH will be probably another topic that Turkey and the US have to discuss. As President Erdoğan underlined in his article published in the NYT, Turkey is ready to take over the fight against Daesh in the southeastern part of Syria.

Following Trump’s withdrawal decision, Turkish military started to prepare a military plan to carry out a military operation against the remnants of Daesh in the middle Euphrates valley region. However, the question of how long the negotiation between Turkey and the US will continue is fragile since the Turkish part, especially President Erdoğan himself, has enough experience regarding the US’s tendency of using the time issue not to reach an agreement but to gain time to appease Turkey’s security concerns about the YPG. Therefore, the more ambiguity in the negotiation process brings more risk for Turkey to achieve his short term security interests. As it is claimed, the first meeting between Turkish and American delegation held in Ankara did not bring out any progress or understanding between the two sides especially over the issue of YPG presence. In fact, the meeting was not a good starting point for both sides.

Although the withdrawal remains unclear, the road-map for Turkey is clear. Firstly, as President Erdoğan proposed in his piece, Turkey propose a stabilization force to clean, hold and build the entire region in the eastern part of the river.

Although the withdrawal remains unclear, the road-map for Turkey is clear. Firstly, as President Erdoğan proposed in his piece, Turkey propose a stabilization force to clean, hold and build the entire region in the eastern part of the river. What does Erdoğan mean by the stabilization force is still unclear but Turkey wants to establish a multi-layered local force in which any YPG element will not be part of it. Turkey clearly wants to create a stabilization force featuring fighters from all segments of the Syrian society, in which the Kurds especially those who are not part of the YPG/PKK will take part. Secondly, if the US and Turkey cannot agree, then Turkey would take a military operation against the YPG held areas in the northern part of the region alongside Turkey’s Syrian border to secure its border and to prevent YPG’s mobilization. The US should have a real exit strategy to withdraw from Syria and Turkey may help the US to prevent more costs in the near future.