With Turkey’s involvement, it is not a remote prospect that Iran and Saudi Arabia will be inclined to cooperate to stabilize the Middle East. No doubt, it is a delicate balancing act that needs a lot of work to maintain given the current regional tensions, but it is doable. 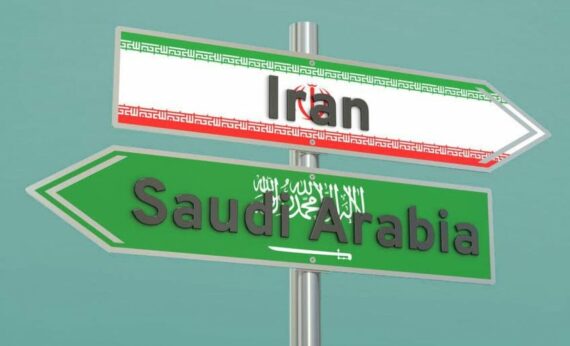 Saudi Arabia and Iran have been rivals for the large part of the 20th century, but this rivalry has not dominated the regional agenda until recently. It is a curious question to ask if a rapprochement between these two rivals could ever be possible.

WorldBy Fahri Yavuz
The Arab Spring pushed Iranians and Saudis to a high level of regional activism. Currently, the two countries have many conflicts, leading observers to conclude that the possibility of a rapprochement between them is very slim. Saudis and Iranians sit on different sides of sectarian divides and are both seeking for regional leadership which only helps to fuel the regional conflicts.

In many ways, Iran and Saudi Arabia are the drivers of the new cold war in the region.

In many ways, Iran and Saudi Arabia are the drivers of the new cold war in the region. They have confronted each other in Iraq, Bahrain, Lebanon, Yemen, and now in Syria where they have been engaged in proxy battles for many years. To reduce Iran’s influence, the Saudis are trying to bring Syria back to the Arab world, while the Iranians don’t want to retreat and continue to support Syrian dictator Bashar al-Assad. In Yemen, Iran has been involved in supporting Houthi rebels, destabilizing Saudi’s southern border. Though Iran’s influence is less obvious, uprisings in Bahrain follow the same pattern.

Tensions between Tehran and Riyadh flared when, in September’s 2015 annual haj pilgrimage, hundreds of Iranians died in a stampede. The tension turned to an intense crisis and confrontation when in January 2016 the Saudis executed a Shia cleric and political activist Sheikh Nimr al-Nimr, which was seen by many observers as a sign that the Saudis are going to reject any conciliatory policy towards Iran.

Iranian hardliners responded by attacking the kingdom’s embassy in Tehran, leading the Saudis to cut all diplomatic ties. Since then talks between the two countries have been complicated to the extent that both countries have failed to reach an agreement on arrangements for the Iranian pilgrims to attend this year’s Haj in Mecca.

The Saudis have done their best to further deepen Iran’s political isolation. Since the easing of sanctions on Iran early this year as a result of the nuclear agreement (JCPOA), a key concern of the kingdom has been that Iran will use money from lifting sanctions to step up engagement in regional conflicts and funding terror groups. Known as “Plan B” to try to stop Iran’s economic rise in the region, Saudis are doing their bit to make sure the foreign investment will not arrive in Tehran. For instance, they banned Iran’s Mahan Airline from flying through Saudi airspace and shipping insurers have been advising clients that ships carrying Iranian crude will not be permitted to enter Saudi or Bahraini waters.

Most recently, conflict between the two countries entered a new stage of cyber war. The hacking of the website of the Statistical Center of Iran, rending it temporarily out of service, was attributed to Saudis. In a reciprocal action, two Saudi statistical websites were hacked, reportedly by an Iranian cyber army, just one day after Iran’s statistics center incident.

The leadership of both countries should know that they may never get to trust one another but they certainly can do business with each other.

In each country, elements of domestic politics work against the possibility of improving relations. In Tehran, it is the power of Sepāh e Pāsdārān, a parastatal organization with huge influence in Iran’s domestic political arena, also having organizational interests in pursuing aggressive policies in the region. In the Saudi Kingdom, the potential challenge comes from conservative elements hostile to Shia Iran. Hence, Riyadh’s decision to cut off diplomatic ties with Tehran shored up support for Saudi authorities from these Sunni conservatives. As one analyst noted, the perception by many in the Saudi Kingdom is that Iran is a bully, and that only a firm response can get it to back off.

What happens next is unclear, but the situation is extremely dangerous. The leadership of both countries should know that they may never get to trust one another but they certainly can do business with each other. They should also realize that this conflict has the potential to drag foreign military interventions into the region. Adding to these is the economic costs of the conflict. As was the case during the cold war, it will substantially increase the defense budgets of both countries, a factor that takes their national budget away from social welfare programs.

The administration of President Rouhani is seemingly pursuing a policy of constructive engagement with the world, including Saudi Arabia. Rouhani himself has always favored a rapprochement with Riyadh. The Saudi leaders might try to view him positively.

It is unclear where Khamenei and his office stand in a confrontation between Rouhani and hardliners on the issue of Iran’s Saudi policy, but the history of decision making in Iran shows that the Supreme Leader eventually sides with those who make rational policies.

Iran should leave the region militarily. In order to establish greater stability in war-torn Middle East, the Iranian leadership should understand that it would be beneficial to pursue pragmatic policies and concentrate on lessening political tensions -factors that would enable them to gain more than they would lose. In addition, Saudis should understand that they cannot exclude Iran from the region. In effect all both parties need to do is to change their paradigm and perception rather than playing the “blaming game”.

Turkey can attempt to create a system for cooperation between Iran and Saudi Arabia to facilitate dialogue over collective regional security interests.

Turkey can play a significant role in this context. A reasonable and appropriate construct is that Turkey can attempt to create a system for cooperation between Iran and Saudi Arabia to facilitate dialogue over collective regional security interests. Although it is at odds over a number of issues, Turkey is an influential regional player and a trusty country for both parties due to its balanced relations with Tehran and Riyadh.  Therefore Turkey, because of the common interests with these two, can play a significant role in rapprochement between the rivals. Given its friendly ties with Iran and the Saudi Kingdom, Turkey can be a reliable mediator to reconcile these age old enemies.

Aware of the tense Saudi-Iran rivalry, Turkey has already been trying to maintain good relations with both countries. Within the new Turkish government’s framework, aimed at increasing the number of Turkey’s friends emphasized by the Prime Minister Binali Yıldırım, Turkey is keen on following a balanced policy between the Gulf States and Tehran. Ankara has been developing a dual-track approach to the Middle East by simultaneously courting these two bitter rivals. A clear indication of Turkey’s willingness to do so is what former Turkish ambassador to Tehran, Ümit Yardım, said in an interview with Tasnim News Agency, “Turkey and Iran are two major players not only in the Middle East but also beyond this region that can put an end to the current situation.”

With Turkey’s involvement, it is not a remote prospect that Iran and Saudi Arabia will be inclined to cooperate to stabilize the Middle East. No doubt, it is a delicate balancing act that needs a lot of work to maintain given the current regional tensions, but it is doable.