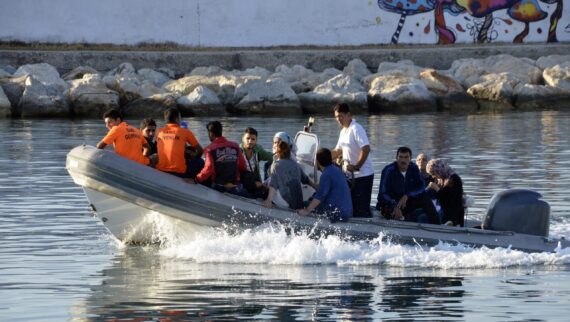 A total of 80 migrants of Syrian and Afghan origin, are captured by Turkish coast guards while they were illegally trying to reach Greece's Kos island through the Aegean Sea near Bodrum district of Mugla, western Turkey. Anadolu Agency

The International Organization for Migration (IOM), has urged all parties to meet their commitments on the European refugee crisis, stating that the EU-Turkey deal achieved significant success.

Speaking in Geneva, on Tuesday, IOM spokesperson Joel Millman said that the number of asylum seekers crossing into Greece had fallen sharply due to measures adopted by Turkey last year after the deal.

In March 2016, Turkey and the EU signed a refugee deal which aimed at discouraging irregular migration through the Aegean Sea by taking stricter measures against human traffickers and improving the conditions of the nearly three million Syrian refugees in Turkey.

The deal also included a €6 billion ($6.8 billion) aid package to help Turkey care for the approximately 3.5 million refugees hosted in the country.

The EU promised to initially allocate €3 billion ($3.5 billion) in its first tranche for projects to support Syrian refugees. However, only €800 million ($930 million) has been transferred so far.

Ankara says it has spent more than €20 billion ($24.1 billion) from its own national resources on helping and sheltering refugees since the beginning of the Syrian civil war.

Rohingya crisis on the table in the UK

In parallel, an event attended by the Union of Turkish Democrats (UETD) and Burma Campaign UK held in the UK Parliament, was concerned about the intensifying atrocities against Rohingya Muslims.

Mark Farmaner, director of Burma Campaign UK, emphasized that thousands of children had lost their lives due to the restrictions on aid to Rakhine State.

During his speech, Farmaner describing the living standards of the Rohingya, stating that thousands of people live in squalid camps with almost no access to health care.

Giving examples of some horrific incidents that took place during the genocide against the Muslim minority in the region since August 25, Farmaner underlined that the Buddhist majority oppressed other minorities for decades.

“The current situation in Burma is the systematic failure by the international community to protect the Rohingya Muslims,” he said.

He called for the international community to reach a consensus in order to end the violence as soon as possible.

Until this day, the UN have reported 607,000 Rohingya Muslims that have crossed from Myanmar to Bangladesh since August 25, with arrivals still continuing.

The UN has documented mass gang rapes, killings – including those of infants and young children — brutal beatings and disappearances committed by security personnel.