On his visit to Canada, EU Affairs Minister Omer Celik said during the 9th annual Halifax International Security Forum in Canada that the commander under whom the Norwegian civilian worked must be investigated. 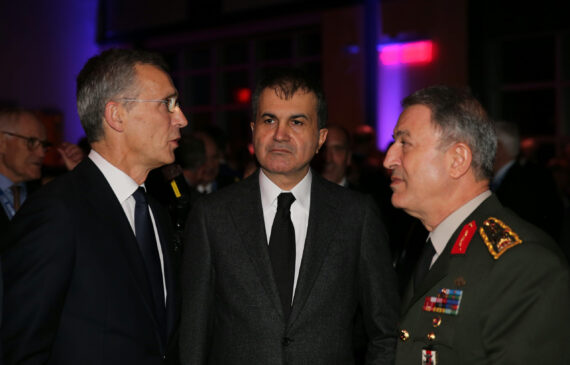 When Turkey sent 40 of its soldiers to participate in the drills at NATO’s Joint Warfare Centre in Stavanger, Norway, what they were to find at the site was what Turkish President Recep Tayyip Erdogan called an attack on “Turkey and the Turkish nation.”

Described as a “scandal” by the Turkish government administration in a series of furious comments, President Erdogan was depicted as an “enemy collaborator” and Mustafa Kemal Ataturk, the founder of the Turkish Republic, was shown on a “hostile leader list” during a computer-assisted exercise.

“They (NATO) carried out a scandal. They know that they cannot stop our country, which is why they are putting us on a target board. I hope that those who welcomed attacks against us before now understand the real face of the matter, as Ataturk was also included,” Erdogan told a ruling Justice and Development Party (AK Party) provincial congress in the eastern province of Bayburt.

The scandal has left entire NATO top brass red-faced, with NATO Secretary General Jens Stoltenberg posting back to back apologies: “I have been informed about the offence caused in a recently concluded exercise at NATO’s Joint Warfare Centre in Stavanger, Norway. I apologize for the offense that has been caused. The incidents were the result of an individual’s actions and do not reflect the views of NATO.”

Norwegian Defense Minister Frank Bakke-Jensen also apologized for the incident. “The message does not reflect Norway’s views or policies and I apologize for the content of the message. Turkey is an important ally in NATO, and we value our good cooperation,” Bakke-Jensen said in a statement.

But it seems this time NATO is going to find it difficult to sooth the ally which has been long complaining of discriminatory treatment by the Western dominated military alliance. Turkey withdrew all its officers from the Trident Javelin exercise in Norway on Friday. All Turkish political parties have united to continue their protests. Turkey called for a proper investigation into the incident. EU Affairs Minister Omer Celik on Sunday called on the NATO authorities to investigate the chain of command involved in the drill.

Celik, on his visit to Canada, while speaking during the 9th annual Halifax International Security Forum in Canada, said the commander under whom the Norwegian civilian worked must also be investigated. He wondered if NATO has any “chain of command.” “Does he (the civilian contracted person) not have a commander?” he asked, suggesting that the entire command should be investigated and necessary steps be taken.

Turkish military chief Gen. Hulusi Akar also spoke during the event and underlined that Turkey’s alliance with NATO should not be undermined. Praising NATO as the “most successful and most effective” military organization that has existed throughout history, Akar referred to the incident in Norway as: “Recently, in one of the NATO exercises we had an unpleasant and unacceptable event, reportedly committed by an individual who may be backed by (Fetullah Terrorist Organization) FETO members.”