Speaking at a joint news conference with Merkel in Berlin, Yildirim called for an intensified dialogue and stronger solidarity in the fight against terrorism. 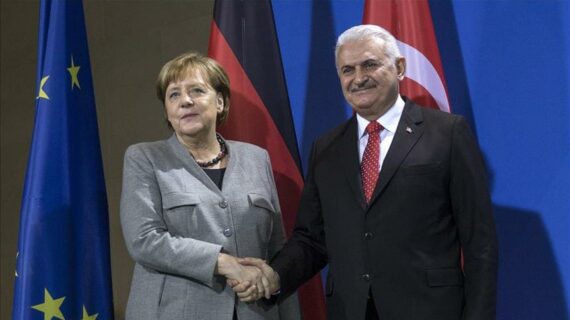 Speaking at a joint news conference with Merkel in Berlin, Yildirim called for an intensified dialogue and stronger solidarity in the fight against terrorism.

“In fact, the YPG is the PYD/PKK’s Syrian offshoot. This is also confirmed by British and American intelligence.

“Whatever their names are, their main purpose is to violate peace in the region and create new troublesome fields,” he said, adding that Turkey wants to see its allies’ support.

The premier also said the decisiveness shown by the West in its fight against Daesh should also be displayed in the battle against the PYD/PKK and YPG terrorist organizations.

The German chancellor welcomed Turkish premier’s first visit to Berlin and backed the need for dialogue to improve ties.

“I believe that this visit is a signal, showing that both sides have an interest in improving German-Turkish relations,” she said.

But she also acknowledged that difficult issues were on the agenda of bilateral relations.

“We must continue our intensive discussions,” Merkel added.

Despite the opposition pushing the German government to exert more pressure on Ankara due to Turkey’s ongoing counterterrorism operation in northwestern Syria, Merkel underlined that Turkey reserved the right to self-defense.

“Just like every country, of course Turkey has the right to pursue its security interests,” she said.

However, she voiced concern over growing tensions between NATO allies, the U.S. and Turkey, due to Washington administration’s support for the terrorist PKK/PYD group in northwestern Syria.

The German chancellor hoped Ankara and Washington would overcome their differences and reach an agreement.

Yildirim underlined that the goal of Turkey’s Operation Olive Branch in northwestern Syria was not only to protect Turkish citizens, but also for securing NATO’s borders and preventing a huge refugee influx to Europe.

It was not Turkey that started the war in Syria but it is Turkey that continues to face the consequences of it and today it is sheltering 3.5 million refugees on its soil, the Turkish premier added.

Ties between Ankara and Berlin have been strained since the defeated coup in Turkey in 2016, as Turkish politicians heavily criticized their German counterparts for failing to show strong solidarity with Turkish government against the attempted military takeover.

Ankara slammed Berlin for granting asylum to several coup suspects, turning a blind eye to outlawed groups and terrorist organizations like the PKK and FETO, which use Germany as a platform for their fund-raising, recruitment and propaganda activities.

German politicians, on the other hand, voiced concern over press freedom and human rights issues, and criticized large-scale investigations into FETO, which orchestrated the defeated coup in Turkey.

The court case involving German-Turkish journalist Deniz Yucel, who was arrested last year on suspicion of doing propaganda for terrorists, was continuing in accordance with Turkey’s principles of rule of law, according to the premier.

Yildirim said the Turkish courts were under a heavy load due to cases linked to the defeated coup of July 15, 2016.

“The case of Deniz Yucel, like other cases, is continuing in accordance with the principles of the rule of law,” he said.

“Turkey faced a huge coup [attempt]. There are thousands of people in these coup-linked cases.

“The courts are overloaded. There might be delays due to the work load. I hope [Deniz Yucel] appears before the court soon and there would be a development soon.”

The arrest of Yucel and around a dozen German citizens on suspicion of aiding terrorist groups has become a source of friction between Ankara and Berlin.

Despite repeated calls by German politicians for the release of their citizens, the Turkish government ruled out any political influence on the judiciary and advised them to wait for the decision of the courts.

Also Read
Germany’s Foreign Policy Is to Remain the Same