Turkey is important for Europe despite Sigmar Gabriel’s false prophecies

By warning that Europe would pay the price if Turkey was to become destablized by sanctions imposed by the Trump administration, Gabriel also added that if Europe does not do everything to keep Turkey a part of the West, “nationalistic forces” in Turkey could “reach for the atom bomb, as in Iran and North Korea, to make themselves unassailable.” 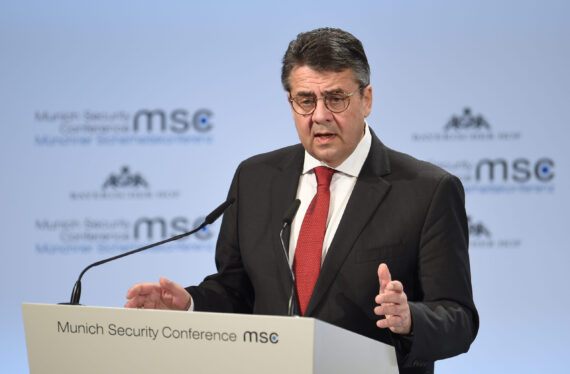 Nowadays, European politicians continue to stress the importance of Turkey’s economic stability for their states, while urging their governments to find ways to support Turkey – in any case if Turkey needs to seek financial support from Europe. But more interestingly, the current leader of the Social Democrats in Germany (SPD), Andrea Nahles, who is not an MP in the German Bundestag, recently pointed to this issue, while many major German politicians and circles made it clear that they do not consider any current proposals with regard to Turkey. Subsequent to statements made by Nahles, interestingly, the former chairman of the SPD and Germany’s former Foreign Minister (2017-2018), Sigmar Gabriel, supported Nahles by stating, “Turkey is our NATO partner. It is within our own interest to have an economically stable Turkey without monetary turbulence.”

The main point about Gabriel’s interview, though, was about a strange prophecy. By warning that Europe would pay the price if Turkey was to become destabilized by sanctions imposed by the Trump administration, Gabriel also added that if Europe does not do everything to keep Turkey a part of the West, “nationalistic forces” in Turkey could “reach for the atom bomb, as in Iran and North Korea, to make themselves unassailable.”

Well, first of all, it has to be mentioned that even though Gabriel acted as the Federal Minister of Foreign Affairs for approximately 14 months, it was ultimately a good choice not to allow Gabriel to continue his job as foreign minister – not only because of his statements regarding the party’s previous Chancellor candidate and SPD chairman Martin Schulz, whom he attacked with harsh and personal words, but also because of his strange elaborations and positions regarding Turkey’s alleged ambitions.

As one remembers, when Gabriel was in office not so long ago, relations between Turkey and Germany had reached a historical low point. Today it seems that Gabriel is still continuing to make meaningless – and even populist – comparisons by using improper words, similar to previous statements made in the past.

However, foreign policy requires a thoughtful preference of words and a fair-minded vision regarding the continuation of long-lasting relations. Unfortunately, relations between Turkey and Germany suffered heavy turbulences due to several stances and statements during Gabriel’s era as minister – even though some mutual steps aimed to deescalate relations had been initiated towards the end of his period. Nevertheless, it was obvious that during that period the German minister personalized most disagreements between the two countries by making use of non-acceptable statements; which were particularly non-compliant from a social-democratic point of view.

But to come back to his recent prediction or “prophecy” that Turkey’s “nationalistic forces” will reach for a nuclear weapon unless Europeans don’t keep Turkey close to themselves. It’s interesting that Gabriel does not explain who he refers to when he says “nationalistic forces.” It would be quite interesting to know whether he’s addressing the current government or other – maybe Kemalist, secularist or alleged social-democratic/leftist – circles? Despite this vagueness, Gabriel made a fatal mistake by comparing a democratic state, which became a NATO member in 1952 – even before Germany – with non-democratic and dictatorial regimes. More, Gabriel’s words resemble some biased German media outlets, which brought the topic of Turkey’s alleged “nuclear weapon ambitions” four years ago with baseless arguments.

Some conservative foreign policy politicians recently played down Gabriel’s accusations. According to them, while Gabriel exaggerated the situation, he was only emphasizing “Turkey’s importance for Europe.” In addition, some media commentators implied that even if experienced politicians such as Gabriel state such extreme prophecies or speculations, these would not be that wrong. Thus, Gabriel’s comments unfortunately show what unreasonable statements might cause in politics.

The former foreign minister made these statements at a time when some German media outlets and conservative – and nationalist – circles are biased to promote a potential German-made nuclear weapon. Only a couple of weeks ago, some circles close to the current CDU/CSU-SPD coalition addressed this issue by supporting the idea of a “German nuclear weapon.” No leading political figure has given a stance or statement in regards to this proposal. However, now, Gabriel indirectly accuses Turkey of wanting to allegedly reach a nuclear weapon – even though there has not been any discourse in Turkey regarding this topic.

It has to be addressed once again that Turkey is a country that attaches great important to the issue of arms control and disarmament. It is also party to all relevant international treaties and conventions, including the Treaty on the Non-Proliferation of Nuclear Weapons (NPT) – which Germany is also party to. However, as addressed previously, some German voices have recently been trying step-by-step to persuade the public towards a likely dangerous direction. Thus, it is irrational to claim that Turkey is going towards this direction, without any mention of the actual real discussions that are occurring in Germany.

Turkey will most likely appreciate Gabriel’s intention to stand on Turkey’s side in the current dispute with the U.S. However, he should definitely correct his considerations and “prophecies” in terms of Turkey’s alleged future nuclear ambitions. Nevertheless, the decision made by SPD leaders, who did not select Gabriel as the current foreign minister in March of this year, seems to be a wise one.