During the 39th session of the UNESCO General Conference in Paris, a total of 134 countries voted for Turkey to join the executive board for the period of 2017-2021. 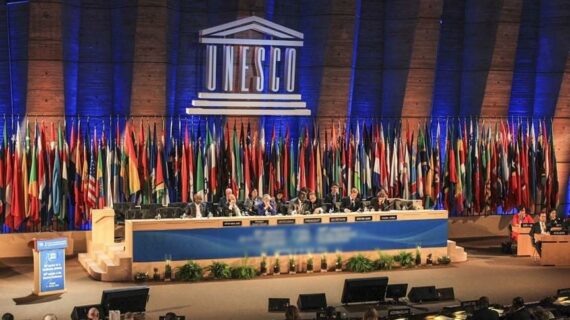 On Wednesday Turkey was selected as a Board member of the United Nations Educational, Scientific and Cultural Organization (UNESCO).

During the 39th session of the UNESCO General Conference in Paris, a total of 134 countries voted for Turkey to join the executive board for the period of 2017-2021.

Turkish Education Minister Ismet Yilmaz presented Turkey’s bid last week and said that Turkey “strongly believes in the mission of this organization to build peace in the minds of men and women.”

The Turkish Foreign Ministry honored the news in a written statement:

“Turkey, as one of the founding members of UNESCO, has been elected by 134 votes to the Executive Board for the period of 2017-2021 at today’s elections in Paris during the 39th General Conference of the Organization. As is known, the Executive Board is the top governing body of UNESCO with its 58 members.

Believing in UNESCO’s ideals, Turkey will continue to contribute to UNESCO’s work as a member of the Executive Board.