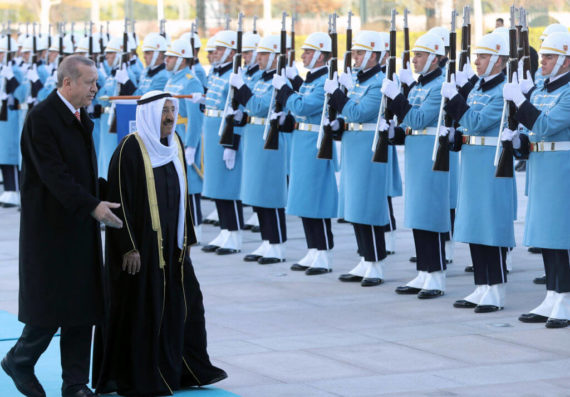 The Gulf Cooperation Council (GCC), institutionalized in 1981 at the height of the Iraq-Iran war, was created to provide a unified security umbrella to the bloc’s micro-states who find themselves unable to face powerful political and economic challenges. The GCC consists of all Arab states of the Gulf, except Iraq, including Bahrain, Kuwait, Oman, Qatar, Saudi Arabia, and the United Arab Emirates. Interestingly, all of six GCC nations are Sunni-led monarchies, with some of them having sizeable Shia populations. There is a total ban on political parties in all of these countries. Only Kuwait and Bahrain have elected chambers with legislative powers. Overall, the GCC has a population of some 50 million, half of whom are expatriates.

Apart from inter-governmental cooperation within the council, all of these countries seek to ally with countries with common regional interests. While, almost all of them have deep-rooted ties with the United States, not all wish to mortgage all their interests in Washington. On the other hand, countries like Qatar, Oman and Kuwait have charted paths unfavorable to US policies in the Gulf region. Actually, it was when Iraq invaded Kuwait in 1990 that GCC members’ dependence on the US consolidated. This was the first major security crisis the bloc faced as it was not able to prevent the invasion of Kuwait. Since US-led forces drove Saddam Hussein’s army out of Kuwait in 1991, GCC members have individually signed major defense pacts with Washington.

The second challenge to GCC regimes came in 2011 with the onset of the Arab Spring movements. However, all member states managed to dodge the pro-democracy protests, except for Bahrain, where the authorities crushed Shia-led protests demanding a constitutional monarchy and an elected Prime Minister. Unlike other GCC members, Kuwait demonstrated its determination to be an independent player within the GCC by refusing to send troops to Bahrain to quell anti-government protests.

The third watershed moment for the GCC came on June 5, 2017 when Saudi Arabia, the UAE and Bahrain, along with non-GCC member Egypt, severed diplomatic ties with Qatar. Kuwait and Oman stayed neutral. This became known as the Qatar Diplomatic Crisis or Qatar Blockade.

In an effort to solve the rift within the unified Gulf house, Kuwait’s Emir Sheikh Jaber al-Sabah engaged in shuttle diplomacy, traveling between the Qatari, Saudi and Emirati capitals shortly after the crisis erupted. The prospect of the Qatar Crisis escalating tensions between GCC members and outsiders — chiefly Turkey and Iran— added to an already volatile security environment in the Gulf. But despite all efforts, the Kuwaiti mediation didn’t bear any fruit. Being a small kingdom itself, the first concern for Kuwait was seeking to prevent an escalation in regional tensions that could result in military action being taken against Qatar, or a forced regime change in Doha. “The next could be Kuwait,” was a leading concern in Middle Eastern media at that time. Meanwhile, Turkey’s role in mitigating the crisis through its timely support to Qatar germinated hopes in Kuwait. In a show of solidarity, Turkey sent cargo ships and hundreds of planes loaded with food, and sent fresh military reinforcement to break the blockade against Qatar.

Apart from such rumblings, Kuwait’s uneasiness within the GCC continued. Despite Saudi and UAE pressure, it did not participate in the fratricidal Yemeni war imposed by the Western arms industry. Kuwait has consistently opposed Saudi Arabia’s misuse of its role as an older brother in the GCC, and its relations with Saudi’s rival Iran are relatively warm. Following the 2016 attack on Saudi diplomatic missions in Iran, it had declined to follow Saudi Arabia’s lead in severing diplomatic relations with Iran.

A critical issue of concern for Kuwait in its relations with Saudi Arabia is the failure to come to an understanding on the Neutral Zone, an area of 2,230 square miles between the two countries. This area was left undefined when the borders were defined during the Al Uqair Convention in 1922. The oil fields in the shared area are also known as Khafji and Wafra. Kuwait opposed the inclusion of US energy giant Chevron in the operation and the Saudis unilaterally ceased production. Kuwait says that as a result it was denied $18 billion in revenue and has sought to be compensated. Kuwait opposes the extraction of crude oil by Saudi Arabia in the area unless the Kingdom recognizes the area as a Kuwaiti governorate. Experts believe that the Neutral Zone’s oil capacity could add up to 500,000 bpd oil output. Saudi Crown Prince Mohammed bin Salman wants to resume production in the common oil fields as soon as possible. In Kuwait’s political corridors, Crown Prince Bin Salman is now referred to as “little Saddam.”

It is in this backdrop that Kuwait has been approaching actors such as Turkey who could help provide some form of protection and safeguard its interests within the GCC and beyond. In recent years, there have been repeated high-level meetings between the leaders of both countries. At a 2017 meeting between Kuwaiti Emir Sheikh al-Sabah and Turkish President Erdogan, Mr. Erdogan emphasized the long-term strategic importance of the economic partnership between the two countries, saying that Kuwait is Turkey’s gateway into the Gulf, while Turkey is Kuwait’s route into Europe and central Asia.

The close relationship between the two nations is also demonstrated by the fact that their collaborations extend into the humanitarian sphere. For example, in recent years, Kuwait hosted three International Humanitarian Pledging Conferences for Syria, to support the three million displaced Syrian refugees hosted by Turkey. Kuwait also funded the construction of the Sabah Al-Ahmad village in southern Turkey, which is now home to over 15,000 refugees. As greater stability returns to the region, and refugees return home, so will prosperity increase, and the work of rebuilding Syria will begin in earnest.

Turkey is also adding a military dimension to its relations with Kuwait. Both nations recently signed a military cooperation agreement. According to the agreement signed by both deputy chiefs of staff during the Turkey-Kuwait Military Cooperation Committee meeting, the two nations plan to share their military experiences and coordinate their activities from 2019 onwards.

Furthermore, there has been a consolidation of bilateral trade between the two countries in recent years, Turkish construction companies in Kuwait have been awarded 30 projects worth $6.5 billion, including the Kuwait international airport. Ankara is now working hard to acquire a bigger share of contracts from Kuwait’s 2035 Development Plan. Turkey’s Foreign Economic Relations Board has a target of increasing trade with Kuwait to $3 billion annually in 2020.

These facts suggest a major future increase of trade between Turkey and Kuwait, and the deepening of economic ties. There are already over 250 Kuwaiti firms active in Turkey, while 180,000 Kuwaitis now visit Turkey for tourism each year. Kuwaitis may visit Turkey without a visa, and over 6,000 Kuwaitis own real estate in Turkey. Turkey is also in a customs union with the EU, making it an ideal base for Kuwaiti businesses seeking access the EU’s 500-million strong market. Reciprocally, Kuwait provides an ideal base for Turkish investors in the Gulf region. It is clear that Turkish and Kuwaiti multidimensional ties are set to grow rapidly in the coming years.