Turkey's President Recep Tayyip Erdogan spoke at the TRT World Forum, touching upon issues such as reforming the UN, the Syrian Civil War, and Turkey's bid to enter the European Union. 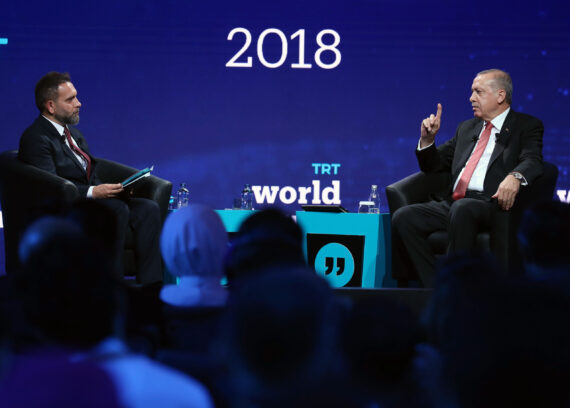 On Thursday, President Erdogan spoke at the TRT World Forum, which is currently taking place in Istanbul. The Forum, which began on Wednesday, brought many speakers from all across the world, with the theme “Envisioning Peace and Security in a Fragmented World.”

Speaking at the closing session of the Forum, Erdogan said, “We need to achieve a United Nations Security Council with participation from seven continents.”

Turkey’s criticism against the United Nations and the UNSC in particular has heightened due to the organization’s failure to successfully deal with the Syrian crisis, which has led to a mass refugee problem across the world.

Erdogan repeated his “The world is bigger than five” motto, and argued that reforms need to be initiated in accordance with this acceptance.

Reminding the audience of the historical context of the UN, and that it was constructed in this manner due to the circumstances of the Second World War, the Turkish President stated, “The era of the five permanent members of the UNSC is over, we are not living under the same circumstances.”

Apart from Syria, Erdogan underlined the issue of Palestine. Arguing that the Palestine issue is one that can be solved, the President argued that the main reason why this issue has been prolonged is because the UN fails to ensure that Israel puts to practice the decisions that have been made against it.

“There are many decisions that have been taken against Israel at the UN, but none of them is implementable.”

During his speech, President Erdogan also touched upon Turkey’s bid to the European Union. Talking about this historical process, the President also mentioned that there could be a potential referendum in Turkey regarding this issue.

“There are many things that we can contribute to the European Union. They may have things to contribute to us but what should be done is, I suppose, to consult with 81 million people [in Turkey] and see what they will decide.”

Turkey has been an active and key player in trying to end the Syrian Civil War. While party to the Astana process, in which Iran and Russia are also guarantor states, recently Ankara and Moscow reached an agreement on the Idlib issue.

Idlib is the only stronghold for Syrian rebels, and throughout the last month the political agenda was full with news that the Assad regime in Syria were to attack the city with Russian air support.

In regards to the issues in Syria, President Erdogan emphasized that Turkish troops are currently in Syria because the Syrian people want them to be there.

“The people of Syria invited us there. ‘Come here to save us’ they said.”

Touching upon the fragile Turkey-U.S. relations, President Erdogan also accused the U.S. of sending 19,000 truckloads of weapons and ammunition to terrorist groups in Syria.

The PKK/PYD issue and the continuous support that the U.S. has provided for the group continues to be a main obstacle in healing relations between the two countries.