The public debt level of the Turkish government is in very low levels that means that the government has an ample room to increase its spending level in an effort to boost the real economy. 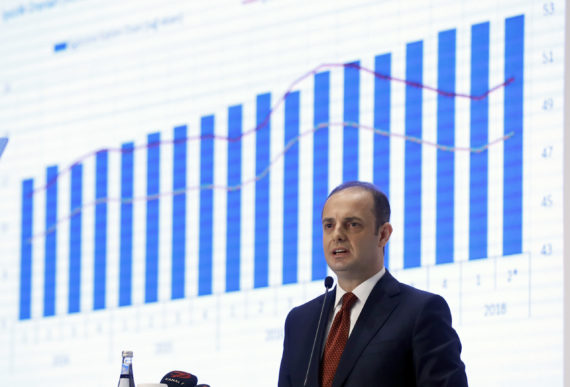 Governor of Central Bank of the Republic of Turkey (CBRT), Murat Cetinkaya makes a statement during the Inflation Report Information Meeting on releasing third inflation report this year at the Sheraton Hotel in Ankara, Turkey on July 31, 2018. Anadolu Agency

In my previous column, I tried to show that good governance does not mean pursuing a fiscal policy as disciplined as possible or a monetary policy as tight as possible. Rather, good governance means trying to reach a policy mix that yields the highest possible benefit level to society and the country.

Take fiscal policy. We should note that fiscal policy is not to minimize government debt. Or, we cannot say in any sense that the lower the public debt, the better. Life is not linear in that way. Fiscal policy has several dimensions and a government’s performance regarding fiscal policy can truly be understood along the lines of these dimensions separately. The most conspicuous and maybe the most important dimension in that regard is public debt level.

Unfortunately, one of the defining features of the 1990s in Turkey was very high (government) budget deficits. The reason behind this was political incapacity, which resulted from political and economic turmoil lived through in most of the 1990s. In this period, on the one hand, budget deficits resulted in monetization, i.e. financing government debt via newly printed money, which in turn fostered inflation to a great extent. On the other hand, budget deficits prompted government to borrow money heavily, which resulted in increasingly cumbersome interest burden. These two factors -high inflation and high debt burden- emanated from rising public debt caused public debt to rise further. In the end, a vicious circle had come into being.

The government can lower the public debt level and make room for looser fiscal policy to be “used” in bad times.

One of the basic elements of this vicious circle -monetization- was eradicated in 1997, with an agreement reached between the Turkish treasury and Turkish Central Bank as to not print money to finance the government.

So, the vicious circle was eradicated in the early 2000s. Inflation rate plummeted, interest burden decreased dramatically, and public debt to GDP ratio fell significantly from over 70 percent to only 28 percent as of today. We should underscore that Turkey is one of the least-indebted governments in the world. This ratio is 85 percent for the U.K., 105 percent for the U.S., 132 percent for Italy and 253 percent for Japan.

However, we should not forget that, as I stressed before, public debt is not to minimize and eradicate “altogether,” but to manage and “optimize.” 28 percent of public debt has important upsides, yes. But we should not overlook the concept of “opportunity cost,” i.e. the cost of “not pursuing” somewhat looser fiscal policy. So, we should take into account the “downsides” of this level of fiscal prudence.

An excessive focus on fiscal discipline could harm the real economy, particularly when the real economy has past its boom period and is slowing down. When the private sector starts to curb its spending, following suit on the part of the government in order to “make ends meet” will only deepen the stagnation the country faces. So, in general terms, the government should pursue counter-cyclical fiscal policy in the Keynesian sense, in order to smooth out the business cycle. In good times, the government can lower the public debt level and make room for looser fiscal policy to be “used” in bad times.

The public debt level of the Turkish government is in very low levels that means that the government has an ample room to increase its spending level in an effort to boost the real economy.

And, after impressive growth rates for the last five to six quarters around 7 percent from 2017 to the first-second quarter(s) of 2018, the Turkish economy has been showing real signs of slowing down for some time. And that the public debt level of the government is in very low levels means that the government has an ample room to increase its spending level in an effort to boost the real economy. The government can do this without hurting fiscal discipline in any sense. Two or three quarters of somewhat looser fiscal policy could be enough. With good “forward guidance” and good communication on the part of the government with the public and the investors, the government can dampen and shorten the lower part of the business cycle we are now facing.

Also Read
The Turkish Economy in the Long Run