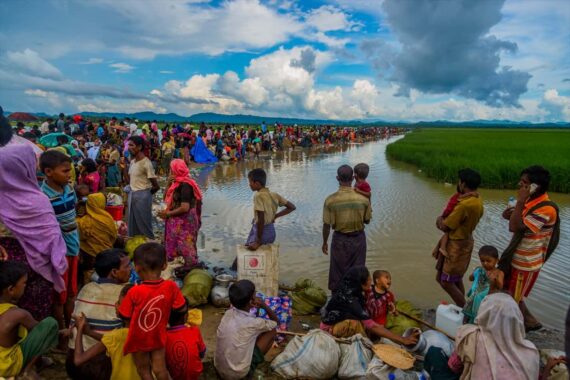 Since August 25, 2017 according to the United Nations, over 600,000 Rohingya have crossed from Myanmar’s western state of Rakhine over to Bangladesh.

Rohingya Muslims have been fleeing military operations in which security forces and Buddhist mobs have killed men, women and children, looted homes and torched Rohingya villages. Records also indicate that women have been victim to rape and torture.

According to Bangladeshi Foreign Minister Abul Hasan Mahmood Ali, around 3,000 Rohingya have been killed in the crackdown.

While Turkey has been at the forefront in providing aid with its humanitarian organizations, Turkish President Recep Tayyip Erdogan also raised the issue at the UN General Assembly held last month.

Mehmet Gulluoglu, head of Turkey’s Disaster and Emergency Management Authority (AFAD) reported that the Turkish Red Crescent had raised over $5.4 million for the Rohingya, while AFAD itself has raised $16.2 million since 2012.

While the Turkish Cooperation and Coordination Agency (TIKA) and Humanitarian Relief Foundation (IHH) have been active in providing aid for the Rohingya, during the Geneva conference IHH representative Taha Keskin stated: “We gladly announce that we are going to allocate $10 million for suffering Rohingya people through 2017 and 2018. We will continue to implement our projects from varied clusters through local organizations in Bangladesh and Myanmar.”

According to the UN, the Geneva conference raised $344 million in pledges for humanitarian aid to the Rohingya refugees.

“I would like to say that Turkey continues to be a generous humanitarian donor globally besides the largest refugee-hosting country in the world.”

“We have to continue to improve the response to the very massive crisis, the biggest and the fastest we have seen in many years.”

Commenting on the standards of life within refugee camps in Bangladesh, Grandi said: “More than 800,000 stateless Rohingya refugees in Bangladesh aspire to a life that meets their immediate needs for food, medicine, water, and shelter. But beyond that, a life that has hope for the future where their identity is recognized, they are free from discrimination, and are able to return safely to their homes in Myanmar. As we come together in solidarity, I want to thank Bangladesh and its refugee-hosting communities and the donors for supporting them.”

While the UN has documented mass gang rapes, killings, brutal beatings and disappearances committed by the Myanmar security personnel, including a report in which UN investigators stated that such violations may have constituted crimes against humanity, it has been reported that Israel still continues to sell advanced weapons to the Myanmar navy.

According to Israeli daily Haaretz, “Isreali-made navy patrol boats custom-fitted with remote weapon stations are part of arms deals estimated to be worth tens of millions.”

According to the report, weapons sold to Myanmar include Typhoon missiles produced by the Rafael Advanced Defense Systems company, which normally produces such systems for Israel.

The U.S. and EU have applied an arms embargo on the Myanmar military.