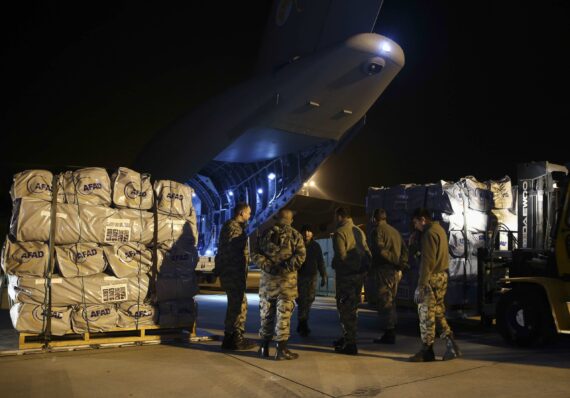 Aid agencies' staff and soldiers wait as a military cargo plane of Turkish Armed Forces is being loaded with medical and rescue equipments before heading to Sulaymaniyah of Iraq following a 7.3 magnitude earthquake that hit Iraq and Iran, at an airport in Ankara, Turkey on November 13, 2017. Anadolu Agency

As soon as the powerful earthquake hit the Iraq-Iran border late on Sunday, Turkey announced its support to both Iraq and Iran, where most of the causalities took place.

While offering condolences to the victims, a statement published by the Turkish Prime Ministry underlined that the Turkish nation stands with the earthquake victims.

According to the US Geological Survey, the magnitude of the earthquake, which hit around 32 kilometers southwest of the Iraqi city of Halabja at 9.15 p.m. was around 7.3.  So far the quake has claimed at least 328 lives in Iran and seven others in Iraq.

Turkey has already begun its aid process, sending convoys of medical and food items. Initial reports say around 3,000 tents, 3,000 blankets and supplies of food were sent by the Turkish Red Crescent to Iraq. 4,000 more blankets from Turkey’s southeastern provinces Muş and Diyarbakır were also sent.

As per the sources close to the ministry, Turkish Foreign Minister Mevlut Cavusoglu called on Javad Zarif, his Iranian counterpart, on Monday to express his deep solidarity with the nation and said Turkey was ready to provide any aid to the country.

The photographs of Turkish Red Crescent volunteers could be seen carrying boxes of aid items in the middle of the rubble and wreckage.

According to prime ministry and health ministry statements, convoys of more aid such as tents, food and medical items are en route to disaster areas from southern provinces of Turkey by military cargos. To match the demands of the urgency, the Turkish Health Ministry said Disaster Management Agency (AFAD)’s 30-men rescue team has reached the Habur border gate to help quake-victims, and around 316 members of the National Medical Rescue Team (UMKE) and emergency response teams are ready to offer assistance to northern Iraq.

A statement from AFAD informed that 5,000 tents, 7,000 blankets, 92 personnel and 11 vehicles were dispatched to northern Iraq immediately after the tremor.

The natural disaster comes in the middle of a strong political controversy following the KRG’s one-sided independence referendum weeks earlier. The referendum drew immense criticism and threats from the three neighbors of the KRG.

Meanwhile, the Kurdish Regional Government (KRG) did not miss to send its note thanks to Turkey providing aid to earthquake victims in northern Iraq immediately.