Anxieties regarding Turkey’s military presence in the north of Syria, its collaboration with Russia and Iran throughout the Astana process and its role of promoting democracy so as to threaten the status quo in the Gulf are only several reasons for the deteriorating relations between Turkey and the GCC, specifically Saudi Arabia, UAE and Bahrain. 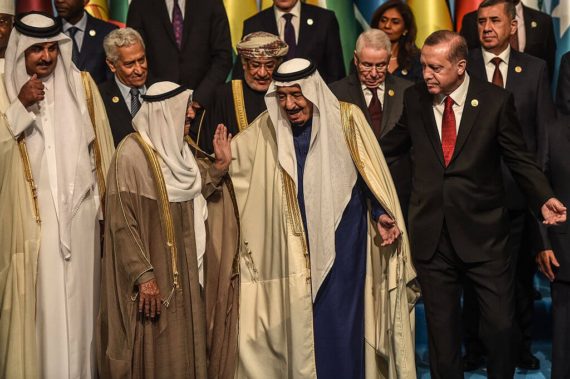 If there is one single issue that has bedeviled Turkey’s relationship with the GCC and Saudi Arabia, it is Turkey’s past efforts to cultivate strong ties with Egypt under President Morsi’s Muslim Brotherhood government. According to Riyadh, the Muslim Brotherhood could embolden Islamists and other opposition groups at home by its demands for democracy in the Middle East. They were also an enthusiastic ally to Iran, the arch enemy of Saudi Arabia. The Syrian Civil War was shaped and driven not only by a Sunni Saudi – Shia Iranian cold war but also by Saudi Arabia – Turkey confrontation on several issues such as Qatar crisis, the murder of Saudi journalist Jamal Khashoggi in Istanbul, and Saudi Arabia’s development of stronger ties with the PKK affiliated YPG.

Riyadh’s silence in the face of July 15 failed coup attempt and rumors that their ally, United Arab Emirates (UAE) spent $3bn on the plot was a turning point in deteriorating relations between Turkey on the one hand and Saudi Arabia and the UAE on the other. Interestingly, the Turkish reaction was appeasing and low key as Erdoğan did not want to mar relations with Saudis at a time when 940 Saudi companies had invested $6 billion in Turkey. (Middle East Monitor, 2017) Only a few months before the coup attempt, King Salman paid a visit to Turkey during which Turkey bestowed its highest honor, the Order of the State, on King Salman as a rare mark of respect. Both sides had already established the strategic cooperation council in December 2015. Despite the rift over Egypt and over Riyadh’s neutrality in the face of YPG /PKK’s activities in northern Syria with the support of the U.S., both sides maintained their friendship at key moments. For example, “Turkey’s foreign minister attended an extraordinary meeting of Organization of Islamic Cooperation foreign ministers in Jeddah in January 2016 to discuss the mob attacks on Saudi missions in Iran following the execution of a dissident Saudi Shia cleric.” (Daily Sabah, 2017) Turkey opened İncirlik airbase in southern Turkey with Saudi Arabia’s warplanes participating in the battle against DAESH forces, led by the United States. (Ergan, 2017) Six months after the failed coup attempt, President Erdogan toured the Gulf beginning with Saudi Arabia and Bahrain but not stopping in the UAE. This tour aimed to further and strengthen ties, keeping open its own lines of communication with Saudi Arabia, while preventing the escalation of tension with Egypt and UAE.

However, with the outburst of the Qatar crisis in 2017, this policy of turning a blind eye to Saudi Arabia and the UAE’s alleged support of the failed coup attempt became untenable as Turkey was openly targeted by the Saudi-led coalition during the crisis.

In addition, it became evident that Saudi Arabia saw the YPG as an efficient actor to stop Turkey’s military advance to the north of Syria and supported the PKK affiliated group more than ever as evidence of its pro-US stance towards the region. For example, only five days after the Qatar crisis erupted, a pro-government newspaper in Turkey, reported that Saudi Arabia, Egypt, and the UAE held a meeting with the YPG. Saudi Gulf Affairs Minister Thamer al-Sabhan also visited YPG controlled Raqqa with Brett McGurk, the then U.S. special envoy for the coalition to defeat ISIS. Most important of all, Saudi Arabia pledged $100 million for stabilization projects in the territories formerly held by ISIS but now under YPG control and made the payment in October 2018. (Başkan, 2019). There was more in the months that followed as well. When Turkey’s military brought an end to the YPG’s control of Afrin in March 2018, Saudi Arabia’s de-facto ruler, Crown Prince Mohammed bin Salman (MbS), labeled Turkey, Iran and the Muslim Brotherhood as a “triangle of evil. This openly showed that Turkey’s gain appeared to be Saudi Arabia’s loss in the region and “highlighted how Ankara and Riyadh’s agendas in Syria are becoming increasingly incompatible with each other.” (Cafiero, 2018)

This was all the more disturbing since Islam and even sectarian belonging was no longer the major common denominator between Turkey and its previous Sunni Gulf allies; the Saudis and Emiratis. On the contrary, the Jerusalem factor in the deterioration of relations was noteworthy as it became evident with the low-profile response by the Saudi-led axis of the UAE, Egypt and Bahrain to the US’s recognition of Jerusalem as the Israeli capital. Erdogan on the other hand stated that “Jerusalem is a red line for Muslims”, and that such a move would be in violation of international law. The Saudi-led axis avoided sending high ranking delegations to the emergency Jerusalem summit of the Organization of Islamic Cooperation that was called upon by Erdogan. The Bahraini foreign minister, described the Jerusalem issue as a side issue and said: “It’s not helpful to pick a fight with the US over side issues while we together fight the clear and present danger of the theo-fascist Islamic republic,” (Aljazeera, 2017) When looking closely, Saudi and Emirati official circles aimed to restrict Erdogan and Turkey’s regional influence by building closer ties with Turkey’s foes,  acting in accordance with the old saying that; the  enemy of my enemy is my friend”.

Beyond these regional developments, there are other issues that concerned Riyadh and Abu Dhabi. The most important of these is the increasing demand for democracy and transparency of the Islamist circles including the Muslim Brotherhood and its leader Morsi, Turkey’s president Erdoğan, some intellectuals such as the Saudi journalist Jamal Khashoggi. Such demands have been perceived by MbS and the Emirati leader, Shaykh Khalifa bin Zayed as threatening the existing status quo and the future of their regimes. From the outset, the model of democracy practiced in Turkey, Ankara’s support of Morsi in Egypt and pro-Ikhwan policy in Syria aroused the wrath of the Saudis for two reasons. Firstly, Ankara’s insistence on Islamic democracy was perceived to be part of hidden agenda by Turkey who were perceived to have neo-Ottoman aspirations from the Saudi perspective. Secondly, Turkey’s policies tilted towards the Muslim Brotherhood whereas Saudi Arabia saw the Muslim Brotherhood as a terrorist organization. This makes it evident that the two Sunni countries differ a lot from each other in their assessments of the dangers at hand. For example, while Saudi Arabia issued a decision banning symbols such as the four-finger Rabia al-Adawiya sign, used to signal support for the Muslim Brotherhood in Egypt, this was used by the Turkish president Erdoğan at public events as a symbol of supporting oppressed Muslims. As al-Buluwi stressed, “the current ‘cold war’ in the Middle East has taken two forms. It involves the Shiite-Sunni war being fought in Iraq, Syria, Lebanon and the Gulf, as well as a parallel Sunni-Sunni conflict involving Turkey, Saudi Arabia and political Islamic forces to control and dominate the politics of Sunni Islam.” (Al-Buluwi, 2014)

Jamal Khashoggi’s murder made the Sunni-Sunni confrontation more evident than ever and caused Riyadh to be blamed by Muslim Middle East for betrayal and “treachery” as they became more and more pro-US and acted in accordance with Israeli interests. (The Guardian, 2019) For example, “in May 2018, Saudi Arabia ended a 70-year-old ban and allowed Air India to use Saudi airspace in New Delhi-Tel Aviv flights. In April 2018, MbS remarked that Israelis and Palestinians have the right to found their own states, giving the signals of recognizing Israel for the first time in the history of Saudi Arabia.” (Rakipoğlu, 2019).

Turkey’s insistence that Riyadh provide accountability and transparency over Jamal Khashoggi’s murder culminated in the UN’s report saying that “Mohammed bin Salman should be investigated over journalist’s murder.”  Agnes Callamard, the UN’s special rapporteur, concluded independently that the crown prince ordered Khashoggi’s murder. This led to frustration in Saudi Arabia over Ankara. (The Guardian, 2019) According to an intelligence report written by the Emirates Policy Centre, a think tank with close links to the Emirati government and security services, a Saudi strategy was prepared to punish Turkey over its stance on the Khashoggi case. (Hearst&Soylu, 2019)

In parallel with these developments, Saudi Arabia launched a social media campaign boycotting all Turkish products and calling for citizens not to travel to Turkey. Saudi Arabian authorities detained trucks and containers carrying Turkish goods into the kingdom which were described by many as a “secret embargo.” Ajlan al-Ajlan, chairman of the Riyadh Chamber of Commerce and Industry, called for an import boycott on Twitter and said: “As the Turkish leadership and Erdogan continue their hostility and target the kingdom’s leadership, we call more than ever before to boycott them… in all areas – imports, labour and dealings with Turkish companies.” (Soylu, 2019) In addition, the Saudi embassy in Ankara issued a warning to travelers that passport theft and petty crime was increasing in Turkey. This led to a thirty percent decrease in number of visitors from Saudi Arabia to Turkey in the first five months of 2019. Al Riyadh daily which is known for its pro-government stance, hared a video saying that “there are many alternatives to Turkey and they are cheaper.” As a response to the video, hundreds of Arabic-speaking Twitter users shared their own vacation videos from Turkey to show that Saudis are welcomed in the country. (Gürbüz, 2019) When looking retrospectively, the pan-Arab media based in Dubai including Sky News Arabic and Al Arabiya also had reported that the coup against Erdogan had been successful.” (Hearst, 2016)

In sum three points should be stressed once again: anxieties regarding Turkey’s military presence in the north of Syria, its collaboration with Russia and Iran throughout the Astana process and its role of promoting democracy so as to threaten the status quo in the Gulf are only several reasons for the deteriorating relations between Turkey and the GCC, specifically Saudi Arabia, UAE and Bahrain. The real reason lying behind the current problematic relationship is closely linked with the lack of capability of the GCC states to act independently in solving the crises in the region and being under the yoke of Israel and the United States. Finally, as Turkey becomes more attractive for the masses living in the Gulf as well as Arab states, the efforts of pro-government media to push anti Turkish sentiment in the GCC will remain fruitless as a poll conducted by American polling firm Pew Research Center proved that Turkey was the country with the increase in influence among the Middle East’s population.