The question of whether Turkey will live up to its claim of being a great power in coming years is as interesting as the question of how the Western world and other great powers will accommodate “new” Turkey. 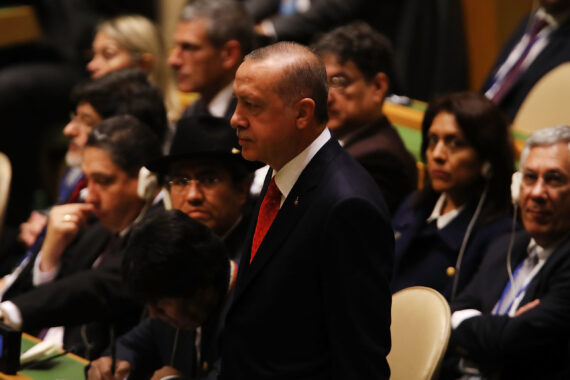 Turkey has been seeking a new status in international politics for some time. President Erdogan’s speech this week at the UN General Assembly in New York has made this crystal clear. In his speech President Erdogan alleged that the UN had lost its credibility due to the members of the Security Council avoiding their responsibilities such as providing stability, security, and peace. He implied that despite the great powers occupying seats of leadership in international institutions that are responsible for global governance, they seem to be reluctant to honor those responsibilities that fall on the shoulders of a leader.

Erdogan pointed that the current international system suffers a leadership problem. In a nutshell, whereas the U.S. has started to take an isolationist turn in its foreign policy by declaring the end of globalization and the liberal international order, the European powers and emerging powers such as China and Russia are only concerned with protecting their own national security. Nobody seems to take responsibility for common issues and help the societies that are unable to solve their security and humanitarian problems on their own.

After pinpointing this problem of leadership, President Erdogan offered a solution that incorporates redefining the global leadership. In an article written for Foreign Policy, which is compiled out of his speech at the UN General Assembly, he declared that “We must end the monopoly of a small number of nations and promote the collective leadership of countries that aim to resolve key global challenges. If the great powers prove unwilling or unable to act, the community of nations—under the umbrella of the United Nations or other organizations—must do what is necessary.” More specifically, he offered that the permanent membership in the UN Security Council should be abolished, the number of its members should be increased to 20 and in this new structure all nations should take turns sitting on the committee.

He argued that one of the members of that community of nations is Turkey. He posited that although Turkey is not a great power with regards to its military and economic capabilities, it has become a global power by taking part in the solution process of Iraq, Syria and many other places. More, Turkey hosts 4 million refugees and is among the top donors of humanitarian aid. All these entitle Turkey to claim a great power status.

In sum, President Erdogan asks for two things. One is that the main institutions that are responsible for keeping current international order afloat should be reformed in order to be able to accommodate rising powers such as Turkey, India, Brazil, and Germany. Only after this is done can the existing international institutions become relevant. Secondly, given its eagerness to take responsibility for international peace and security, Turkey should be recognized and treated as a great power. And more importantly, Turkey and other powers which are excluded from decision-making processes in the international institutions have all the right to build up new institutions to handle global governance if the great powers do not take any meaningful step to reform the existing ones.

Indeed, Turkey has undergone a fundamental transformation in its domestic politics. It has eliminated its authoritarian elite rule which had kept the country feeble and dependent on the global centers of power and replaced it with a popular democratic rule. This process of democratization in the domestic realm has increased Turkey’s demand for autonomy in international politics. This demand for autonomy has shaped around the claim for a new status in international politics. The question of whether Turkey will live up to its claim of being a great power in coming years is as interesting as the question of how the Western world and other great powers will accommodate “new” Turkey.