One should underscore not more saving or less consumption, but increasing the productivity level of the “consumption composition” when going through economic difficulties. It is not “more saving,” but “more productive consumption.” 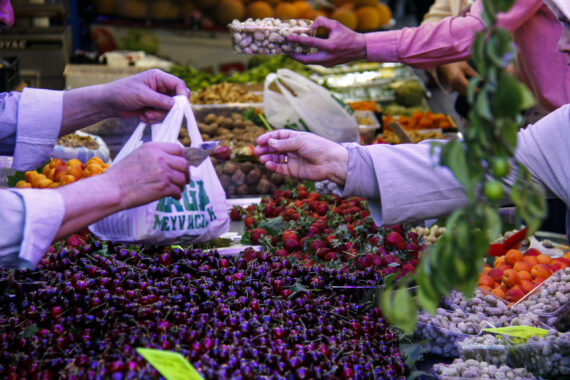 A picture of people shopping in a Turkish market in Istanbul. Anadolu Agency

The financial turmoil precipitated by the rapid devaluation of the Turkish Lira against the U.S. dollar, and the ensuing (negative) economic ramifications since then have caused many to offer possible steps to be taken as ways out of the economic troubles now Turkey has been going through. In this respect, a recurrent suggestion has revolved around “more saving” and “less consumption.” Indeed, saving is a merit on its own and evokes giving up short-term wants and desires to reach long-term goals.

However, since the modern economic/financial system we live in is mind-bogglingly complex with numerous variables and very significant feedback mechanisms, it is critically important to take into account and ponder the possible economic consequences and ramifications of the economic steps taken. This situation holds particularly for saving, a “macro” variable resulting from general workings of the economy.

When considering saving subject, one should pay attention particularly to two things: feedback mechanisms and the relationship between saving and investment. Firstly, one should not forget that in modern economies people produce mainly not for personal consumption, but to sell the products in the “market.” So, more saving and less consumption of one person (buyer/consumer) translates into less products sold and less income earned for another person (producer/seller). So, trying to save more and consume less altogether on the part of consumers in a market economy have to result in slack demand, higher unemployment rate and (possibly) an economic recession.

This situation could easily and ironically result in “less” saving instead of more at the end of the day. This is the Keynesian “paradox of thrift” and it emanates from the “fallacy of composition” principle: being true at the individual level does not make it automatically true at the general level. If a person wants to increase his/her saving level, he/she could achieve this with spectacular success. However, if everyone strives to do this, then things will go awry.

Therefore, when facing economic difficulties as a country, the wise suggestion is not to save more, but to keep the consumption level the same. Economies are based on trust and expectations. An economic crisis could happen out of mere expectations, since people would decrease their consumption levels out of fears of uncertainty regarding the future trajectory of the economy. This is self-fulfilling prophecy.

Therefore, one should underscore not more saving or less consumption, but increasing the productivity level of the “consumption composition” when going through economic difficulties. It is not “more saving,” but “more productive consumption.” Actually, this fact is not known much: the amount of savings in a country is not determined simply by calculating the unspent part of the national income. There is no such calculation and there cannot be within the framework of current national income (GDP-Gross Domestic Product) calculation techniques.

There are three dimensions/sides of national income (GDP), which are production, income and consumption. And total production, total consumption and total income level in a given year in a closed economy must be equal to each other out of logical reasons and mathematical consistency. This is a hard fact regarding national income calculation techniques. Then, where does saving find a place in this story?

Here: national income could be and is split in two parts as “consumption expenditures” and “investment expenditures” and the latter is regarded and labeled as “saving.” That is, we infer the saving level from the investment level. This calculation technique, though indirect, is totally meaningful and understandable: any saving that is not turned into investment is a saving wasted.

Yes, not only in times of economic difficulties, but we always, as earth inhabitants, should avoid wasting resources. In order to achieve this, we need to strive for “more productive consumption” always. Within this framework, the current will of the Turkish government to curb unnecessary expenditures in public institutions is praise-worthy. However, the emergent monetary resources out of decreased expenditures should be channeled to more productive areas.

The public debt to GDP ratio in Turkey is just 28 percent, one of the lowest in the whole world. So, the Turkish government does not need to reduce its overall expenditure level. Hence, the savings to be achieved by, for example, decreasing the number of official cars had or leased by the government could be channeled to R&D (research and development) projects run by the government itself or the private sector. Turkey, on the one hand, could sustain the current level of economic activity and avoid an economic crisis, and on the other hand could feed the long-run economic momentum.

Also Read
Not Financial Speculations, but Financial Attacks against Turkey?