Turkey to lead on humanitarian assistance 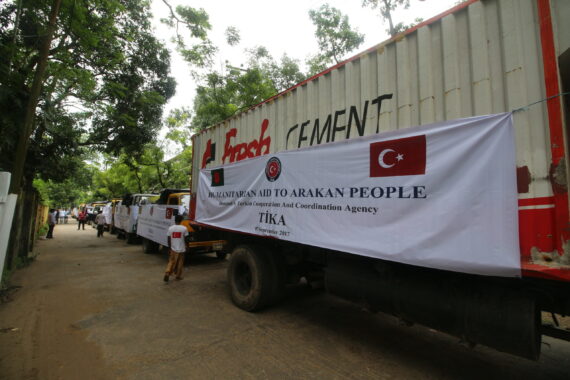 Speaking at a ceremony marking the beginning of the academic year in Hasan Kalyoncu University, in the southeastern Turkish province Gaziantep, Turkish Foreign Minister claimed that Turkey will surpass the U.S. in terms of supplying humanitarian aid across the world.

Mevlut Cavusoglu stated that Turkey is currently the second-most charitable country in the world, only preceded by the U.S..

“But this year we will be the top country to send humanitarian aid,” he added.

Underlining that there is no parallel between economic strength and humanitarian dedication, the Foreign Minister stated that Turkey is expected to spend more money on humanitarian aid in 2017, despite the fact that it is not the richest country in the world.

Speaking about the millions of refugees that have been displaced due to conflict, terrorism and famine, Cavusoglu said: “If you don’t stop terrorism where it is occurring, it will reach you.”

“You cannot say, ‘it is far from me, it will not touch me, it has nothing to do with me.’ This is the biggest mistake in the war on terrorism the world is making.”

In regards to the situation in Syria, the Foreign Minister said: “Stability in Syria will not be possible without a political solution.”

He claimed that the world had double standards towards dealing with terrorism, adding that only the fight against Daesh will not bring stability in Syria.

According to official statistics, Turkey is currently hosting over 3.4 million Syrian refugees that have fled the war.

Ankara calculates that it has spent at least $30 billion in sheltering and providing satisfactory living standards for these guests.