For Palestinians, who feel largely abandoned or sold out by their regional “Arab brethren,” the US declaration is one last nail in the coffin. 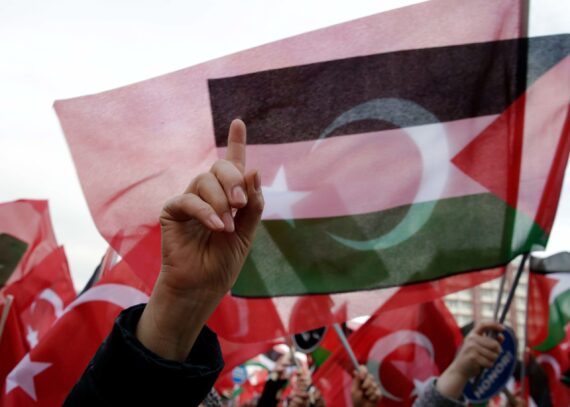 Thousands gather at Anadolu Square to protest US President Donald Trump's recognition of Jerusalem as the Israeli capital, in Ankara, Turkey on December 17, 2017. Anadolu Agency

Republican People’s Party (CHP) asked the government to open a Turkish embassy to Palestine in East Jerusalem. The step, if taken, will be a bold confrontation against the United States that declared Jerusalem the capital of Israel on December 6 – a move that has staggered the entire world.

Speaking on behalf of his party Altay also hailed the decisions of the Organisation of Islamic Cooperation (OIC), which recognized East Jerusalem as the occupied capital of Palestine. The Muslim bloc, which was formed in 1969, held an emergency meeting last week following Turkish President Recep Tayyip Erdogan’s call. The meeting resulted in issuing a declaration recognizing East Jerusalem as the capital of Palestine.

Altay criticized the Arab states for being insensitive to Palestinians and failing the cause of Palestine by not being active in their solidarity with the people of Palestine.

Israel and its long-time Western backers, particularly the United States, have historically followed the strategy of exploiting the opportune times that the Middle East offers occasionally. Israel declared Jerusalem its capital in 1980, the time when it had brought most of the corrupt Arab regimes to their knees through war or bribed them into submission. The most remarkable example was when former Egyptian ruler, Anwar Sedat betrayed Palestinians by agreeing with the US and Israel to go for Camp David “peace talks.” In response to the Israeli move, Turkey had closed its Consulate General in Jerusalem as a sign of protest.

For Palestinians, who feel largely abandoned or sold out by their regional “Arab brethren,” the US declaration is one last nail in the coffin. As ever they continue to protest against the American move. Since Trump’s declaration, ten Palestinians have been killed by Israeli armed forces for protesting against the move, including the double amputee, the 29-year-old, Ibrahim Abu Thurayyah. Ibrahim had lost his legs and kidney in Israeli air strikes on Gaza city in 2008. His funeral was held on Saturday along with three other Palestinians who were also shot by Israelis.

Palestinians also rejected US Vice President Mike Pence’s visit to Jerusalem, calling for massive protests. To add fuel to the fire, Pence is visiting Jerusalem on Wednesday after postponing it by three days. Palestinian Authority President Mahmoud Abbas stated that following Trump’s announcement, he would not meet with the vice president.

Pence will fly from Washington on Tuesday and arrive in Egypt on Wednesday, where he will hold a bilateral meeting with Egyptian military general turned President Abdel Fatah al-Sisi, who toppled the democratically elected government of Mohammad Morsi in 2003. Pence will fly to Israel on the same day in the evening to visit the Western Wall soon after his arrival.

On Thursday, he is going to hold a bilateral meeting with the Israeli right wing Prime Minister Benjamin Netanyahu, address the Knesset and then have dinner with Netanyahu in the evening at his residence.

Indonesia to “boycott” US products

In many of the countries with large Muslim population including Pakistan, Turkey and Indonesia, protests have been continuing ever since the US move against Palestinians.

In Indonesia, the country with the world’s largest number of Muslim population, civil society groups including Muslim clerics are calling for a boycott of American products. Around 80,000 protesters expressing solidarity with Palestinians assembled outside the US embassy in the capital, Jakarta. Interesting, Gulf States, long suspected of building secret relationships with Israel, have not marked any major protests except few ritualistic statements.

The UN Security Council is planning to vote on a resolution to reject the US decision to recognize Jerusalem as Israel’s capital.

The draft states that “any decisions and actions which purport to have altered, the character, status or demographic composition of the Holy City of Jerusalem have no legal effect, are null and void and must be rescinded in compliance with relevant resolutions of the Security Council.”

The draft resolution submitted by Egypt on Monday is however considered as exercise in vain as it does not mention the name of the United States, leaving Palestinian delegates hopeless. The resolution is also expected to face clear US veto.