Speaking alongside his visiting U.S. counterpart Rex Tillerson at a press conference in Ankara, Mevlut Cavusoglu said: “We’ve reached an understanding to normalize our relations [with the U.S.].'' 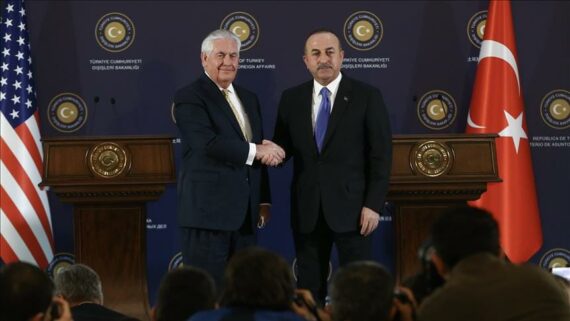 Ankara and Washington have “reached an understanding” to normalize ties following a period of tensions, Turkey’s foreign minister said on Friday.

Speaking alongside his visiting U.S. counterpart Rex Tillerson at a press conference in Ankara, Mevlut Cavusoglu said: “We’ve reached an understanding to normalize our relations [with the U.S.].”

“Of course, there are steps which have been taken for this. Both sides have expectations of each other,” Cavusoglu said.

“We clearly expressed [to the U.S. side] our expectations with regard to the fight against FETO and the PKK terrorist organizations, and the U.S. support for the YPG.”

The Turkish-led Operation Olive Branch is now fighting the terrorist YPG/PKK in northern Syria. FETO, the Fetullah Terrorist Organization, is responsible for a 2016 defeated coup that martyred 250 people and injured 2,200.

“We assume that our vital security concerns have been taken serious [by the U.S.],” Cavusoglu added.

Saying that his meeting with Tillerson dealt with “result-oriented” steps, Cavusoglu said: “We agreed to establish some mechanisms which will cover and evaluate all the issues.”

Asked about the terrorist YPG/PKK presence in Manbij, Syria — a standing bone of contention between Ankara and Washington — Cavusoglu said the mechanism handling the Syria issue will prioritize Manbij.

“We should be sure that the YPG crossed to the eastern side of the Euphrates River, and we should see its execution together,” Cavusoglu said, adding that it is important who control these cities and provides security for their stability.

The terrorist YPG/PKK should first withdraw from Manbij, northern Syria for Turkey to take steps with the U.S. based on trust, Cavusoglu added.

Cavusoglu said Turkey and the U.S. will work in coordination to assure stability in other cities of Syria.

The YPG is the armed Syrian offshoot of the PKK terror organization, which has waged a more than 30-year war against the Turkish state, resulting in tens of thousands of deaths.

Relations between the two countries have been strained over U.S. support for the terrorist group PYD/YPG/PKK in northern Syria, with the U.S. calling the group a “reliable ally” in the fight against Daesh, amid strong Turkish objections.

For his part, Tillerson said: “We stand shoulder to shoulder with Turkey against terrorist threats.”

The U.S. will work on promises given to Turkey on Manbij, northern Syria, he added.

After the Turkish-led Operation Olive Branch clears the terrorist PYD/YPG/PKK from Afrin, northern Syria, Turkish leaders say it will proceed to do the same with Manbij, where both terrorist and U.S. forces are stationed, raising the specter of a confrontation.

“We will decisively stand against all attempts to create faits accomplis and demographic changes within Syria,” the statement said.

Ankara and Washington highlighted that “there can only be a political solution to the Syrian crisis.”

The two countries, the statement also said, agree to intensify their cooperation to “bring about this result within the framework of established parameters, namely” UN Security Council Resolution 2254 and the Geneva process.”

Syria has been locked in a devastating civil war since March 2011, when the Bashar al-Assad regime cracked down on pro-democracy protests with unexpected ferocity.

While UN officials say hundreds of thousands of people have been killed in the conflict, Syrian regime officials say the death toll is closer to 10,000.