Perhaps the right way to interpret the recent warming in the bilateral relations is about the American recognition of Turkey as a rational and effective international actor whether the U.S. supports or tries to undermine this effective role. 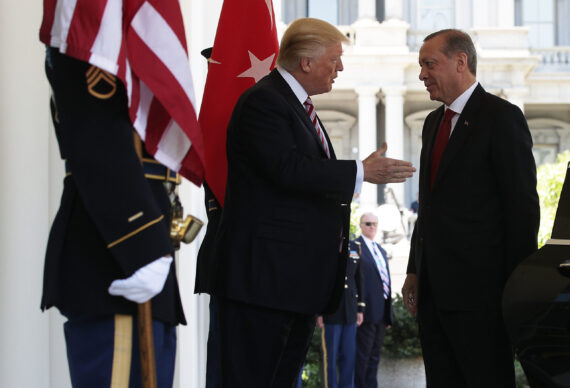 U.S. President Donald Trump (L) welcomes President Recep Tayyip Erdogan (R) of Turkey outside the West Wing of the White House May 16, 2017 in Washington, DC. President Trump hosted President ErdoganÊwith an Oval Office meeting and a working luncheon. Both leaders are expected to give a joint statement. Getty Images

Turkey and the U.S. started joint patrols in the northern Syrian city of Manbij on Thursday, November 1 based on a long waited deal between the two countries. Since the days of Turkey’s Euphrates Shield Operation (Aug 24, 2016 – Mar 29, 2017) in the Jarabslus-Al Bab-Mare triangle, Turkey had been waiting for a role in the future of Manbij. Turkey cleaned this area from Daesh forces with the operation but did not enter Manbij. This decision was taken as a response to the guarantees Turkey received from the U.S. regarding the future of the city, which included that the PYD would not rule the city, and further, withdraw its forces out of the city. The deal was brokered between Turkey’s Foreign Minister Mevlut Cavusoglu and U.S. Secretary of State Mike Pompeo on June 4 but was delayed by the U.S. side until this moment. Despite this delay, the two countries finally came to the next stage of carrying out joint patrols on top of two other significant developments in bilateral relations.

First, based on Pompeo’s remarks, Turkey will be granted a waiver from the U.S. oil sanctions against Iran, which is essential as Iran is a major energy source for Turkey. The news came out on Friday, just three days before the second phase of sanctions were set to go into effect on November 5. The second big news also came out on the very same day as the U.S Treasury Department stated that the blacklisting of two Turkish ministers, Abdulhamit Gul and Suleyman Soylu, had been lifted. Turkey corresponded in the same way by lifting its own bans towards the American counterparts. The bans were placed initially by the U.S. to put pressure on Turkey over the Brunson affair. The softening also followed the release of Andrew Brunson.

All the three developments (joint patrols in Manbij, waiver from the Iran sanctions, and mutual removal of bans over ministers) are good news for the future of the troubled relations between the two countries. Nevertheless, there are still plenty of reasons to worry about the future of relations between Turkey and the U.S. First, Turkey still perceives a great deal of threat originating from U.S. actions. Two such perceptions have quite solid bases as the U.S. still hosts Fetullah Gulen, the criminal cult leader of FETO, which carried out a failed coup attempt on July 15, 2016, in which the organization sent a squad to assassinate President Erdogan, bombed the Turkish parliament, and murdered 250 Turkish citizens. Further, the U.S. still supports the PKK’s Syrian offshoot, the PYD, in Northern Syria. Until these two matters are resolved, relations cannot go back to normal. Given that Turkey is also pressuring the PYD in the east of Euphrates nowadays, Turkey-U.S. relations are still fragile and have not passed the test of time in Syria. These are all the crisis points between the two used-to-be allies.

These crises cost Turkey a lot, not only in terms of the economy as the Turkish Lira lost quite a deal of its value vis-a-vis the USD as the tension rose in the late summer. Turkey’s even bigger cost was its sense of security as the U.S. is still the primary reason why Turkey cannot eliminate FETO and the PYD completely. Despite these, Turkey had one major gain from these crises. Ankara has learnt how to survive, not only without American support, but also despite the American efforts to hurt the country politically and economically. Turkey has learnt how to carry out cross-border military operations in a country where U.S. forces are settled in favor of Turkey’s adversaries.

Turkey has also learnt how to negotiate for its interests rather than prioritizing the possible American reactions. Turkey has learnt how to coordinate its actions with other global powers such as Russia based on mutual respect and understanding. Further, Turkey has learnt how to set a negotiation table where the future of Syria is discussed without the U.S. Perhaps the right way to interpret the recent warming in the bilateral relations is about the American recognition of Turkey as a rational and effective international actor whether the U.S. supports or tries to undermine this effective role. This recognition, if supported with a genuine respect toward Turkey’s security needs, can save the exhausted bilateral relation.