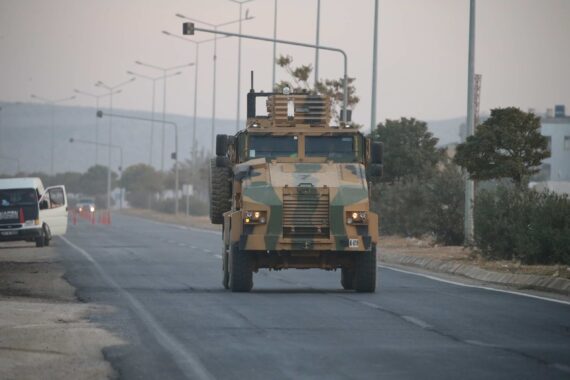 Turkish Army's armored vehicles are deployed on the border line in the Turkish border district of Reyhanli near Syria's Idlib, within the reconnaissance activities in Idlib as part of an international agreement to establish de-escalation zones, in Hatay, Turkey on October 23, 2017. Anadolu Agency

Referring to Afrin, the President stated: “With the Euphrates Shield Operation we cut the terror corridor right in the middle. We hit them one night suddenly. With the Idlib operation, we will collapse the western wing.”

Following an agreement with Russia and Iran, who are the two other guarantors of the Astana process, Turkish troops entered Idlib with the aim to reduce fighting between the pro-Assad regime forces and opposition fighters.

President Erdogan also criticized the U.S. for arming PKK/PYD terrorists: “The U.S. sent 4,900 trucks of weapons to Syria. We know this. This is not what allies do. We know they sent 2,000 planes full of weapons.”

Reports have emerged confirming that the Turkish Armed Forces hit PKK/PYD positions in the northwest region of Afrin.