Turkey working for the normalization of Syria

The sensitivity in protecting civilians is "causing the operation to proceed much more slowly and that there is a clear separation between the PKK and the Kurdish population of Syria.” 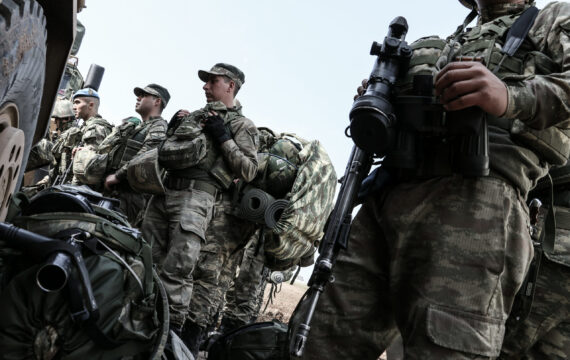 A photo taken from Turkey's Hatay province shows Turkish commando units as they are dispatched with Turkish armoured personnel carriers to border units as reinforcement within Operation Olive Branch launched in Syria's Afrin, on March 7, 2018 in Hatay, Turkey. Anadolu Agency

On March 3, 2018, Turkey’s Office of the Prime Ministry, Directorate General of Press and Information organized a visit consisting of foreign reporters and non-governmental organizations to Syria.

The aim of the visit was to inform reporters of the situation in Afrin and give information about Operation Olive Branch, which until this day has seen the neutralization of around 3,000 terrorists. In addition to the staff that organized the trip and the reporters, members of NGOs also attended. The group was reportedly composed of 20 people in total.

There was a wide range of reporters, including individuals from the BBC and Al-Jazeera. A reporter who attended the visit spoke to The New Turkey on the condition of anonymity and explained their experience.

A group of reporters are seen before the visit. Picture obtained from source.

The trip to Syria began in Azaz, a city northwest of Syria, roughly 30 kilometres from Aleppo – n area that was included in Operation Euphrates Shield. The source emphasized that Turkey is pursuing a vital role in the re-normalization of life standards in Syria. “Turkey is trying to ensure Azaz becomes an example city for the rest of Syria. It is doing this by helping schools, re-building infrastructure and by helping the local administrations. It even has a PTT [a Turkish post-office] there.”

“Assad regime forces had bombed a mosque in Azaz. Today Turkey’s Presidency of Religious Affairs is re-building that mosque,” the source said.

“We spoke to a couple of families in Mersawa. There are only around 15 families left, as most of them have migrated and left their homes. AFAD and the Turkish Red Crescent provided these families with survival necessities such as food and blankets.”

A picture depicting the help provided by AFAD in Mersawa. Picture obtained from source.

When asked about the situation of the civilians in operation areas, the source told us that “they [the Turkish Armed Forces and the Free Syrian Army] are very sensitive against the civilians. It feels like there is a political order that warns ‘do everything to protect the civilians.'”

The source also added that some members of the Free Syrian Army said that the sensitivity in protecting civilians is “causing the operation to proceed much more slowly and that there is a clear separation between the PKK and the Kurdish population of Syria.”