Turkey’s Balance of Power Politics in the Axis of Europe, US, and Russia

Today, the most prominent threats to Turkey’s security emerges from the current policies of the U.S. and German governments. So therefore, improving relations with Russia, China and other Middle Eastern countries may allow Turkey to counterbalance its Western partners. 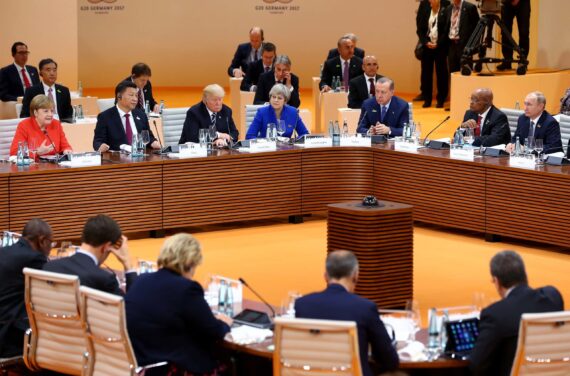 The downfall of relations between Turkey and the U.S. along with certain European countries in the last few years have weakened the country’s ties with the Western alliance. Considering that this alliance was established with NATO during the Cold War and based itself on security cooperation, the negative approach adopted by Western states towards Turkey’s security has deteriorated these relations. There are two issues that are distracting and inexplicable in terms of the solidarity expected from the NATO alliance. The first is, despite listing the PKK as a terrorist organization, Western states are allowing affiliates of this terrorist group to act freely in Europe. Second is the un-hidden military and financial support for the PYD, which is another arm of the PKK. The policies of Turkey’s Western “allies” during the July 15 coup attempt, which were perceived as a tacit support for the coup, further deteriorated relations. Similarly, countries like the U.S. and Germany opening their doors and offering protection to FETO members, who are being prosecuted as perpetrators of the coup attempt, is disconcerting Turkey.

Moreover, the insistence of these countries, in utilizing organizations like PKK/PYD and FETO as a means to “re-calibrate” Turkey’s “shifted axis” continues to obstruct healthy relations between Ankara and Western capitals. It should be highlighted that these listed terrorist organizations are not the only methods Western countries adopt in their so-called process to “re-orbit” Turkey. Attempts to press Turkey on Iraq, Syria and Qatar fronts, and enabling mechanisms of economic disruption like Germany did, and ventures aiming to spread distrust through adjudications like the US did can be considered as said tools.

Ankara not backing down from its independentist foreign policy means the continuation of the Western attacks.

Firstly, as the country has limited economic and military capacity in comparison to global powers, Turkey will inevitably seek a balance that will relieve the pressure from Western countries and allow it a wider room for maneuver. In this respect, Turkey should improve relations with global powers like Russia and China, while emphasizing cooperation and tensions with regional powers like Saudi Arabia and Iran.

Considering the fact that the listed global powers have certain hegemonic aspirations just like the U.S. and other Western countries, it is definite that achieving a balance will be challenging. However, it should be acknowledged that Turkey is not the only country facing this challenge. Germany, for instance, is also struggling to achieve a balance between its relations with the U.S. and Russia. This nature of international relations therefore forces a sovereign state to pursue foreign policy in a rational manner, ensuring the consideration of all challenges that can potentially be faced.

Today, the most prominent threats to Turkey’s security emerges from the current policies of the U.S. and German governments. So therefore, improving relations with Russia, China and other Middle Eastern countries may allow Turkey to counterbalance its Western partners. A second suggestion for a strong and capable foreign policy is that, despite the recent developments, threats and negative press that it is receiving, Turkey should refrain from disassociating herself from the West. As the bilateral relations between Turkey and Germany have come to the forefront, and while German politicians have tried threatening Turkey with suspending EU accession negotiations, the reactions they have received from member states such as Britain and Greece illustrate the fact that Western states are not in unison in terms of their approach towards Turkey. It is for this reason that Ankara must continue to seek positive dialogue with rational actors in the West. By doing so, Ankara will have the opportunity to underline the hostility of certain Western states, implying the fact that the West could completely lose Turkey if this attitude does not change. This is necessary for both pushing the policies of western states against Turkey into a more tolerable direction and preventing Russia and China from dominating Turkish foreign policy.

With all factors listed, its geographical location and strategic importance makes Turkey an important actor in global politics, which is why carrying friendly relations with both the East and West will be beneficial for all parties. In order to ensure that Turkey does not repeat the mistakes of the past or fall into isolation, despite the difficulties that the government is facing, maintaining a balanced foreign policy is what Ankara is trying to achieve.