Turkey's CHP is Reminiscent of the Far-Right in Europe 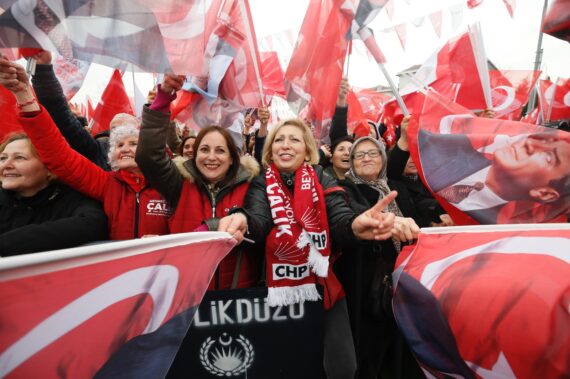 A quite interesting phenomenon of the Turkish politics is the fact that center-left or generally social-democratic circles and political parties differentiate themselves from mainstream leftist movements particularly from Western democracies. Moreover, it is also striking that Western media outlets and political actors prefer Turkey’s leftist parties as a kind of “dialog partner,” while disregarding the stiff differences between Turkey’s left and the West’s left. Despite several confusing trends, it is weird that Turkey’s main center-left political party, namely the main opposition Republican People’s Party (CHP), regularly address Syrian refugees in a discriminatory tone – similar to that of European far-right circles.

A recent case once again displayed the main position of certain CHP politicians and the lack of criticism regarding such obviously racist discourses within “leftist” cadres. The recently elected mayor of the western Turkish province of Bolu, Tanju Ozcan (CHP), who was the CHP’s MP for Bolu between 2011-2019, gave an order to the departments of the Bolu municipality to stop providing relief to refugees. According to the mayor’s letter to the municipality’s Culture and Social Works department, the CHP mayor declared to cut aid for Syrian refugees living in Bolu. Mayor Özcan argued that the aid had reached an unbearable level and that the people of Bolu “have cared for them for seven years, giving them our children’s livelihood. After this, I won’t give a single penny to Syrian refugees from the Bolu Municipality budget.”

CHP representatives and Turkish secularists in general, unfortunately, tend to have a negative bias against people from Muslim-majority countries.

However, the main point I want to focus on is not the lacking capabilities of a municipality in western Turkey, but the general negative discourse of the CHP, despite it being a “leftist” or center-left political party. CHP representatives and Turkish secularists in general, unfortunately, tend to have a negative bias against people from Muslim-majority countries – no matter whether they are wealthy tourists or refugees. As a recent example, regardless of being a refugee, a famous Turkish comedian discriminated against Arab investors in Turkey, while not mentioning the thousands of other foreigners, for instance from Western countries.

The negative tone against Syrian refugees, especially among CHP or Turkish secularists and the nationalist Iyi Party, is trying to be legitimized through arguments referring to the economic conditions of the country. By this, it is stated that over 4 million refugees cause certain difficulties for the state and its economy due to the long-lasting use of the country’s capabilities. However, it should be emphasized that on the other hand, there is not a negative mood among the general Turkish population.

By elaborating the CHP mayor’s recent order in Bolu, one also remembers that in the past couple of years, other leading figures of Turkey’s main opposition party took an anti-refugee stance, resembling the discourse of far-right parties in Europe. For instance, the CHP’s popular presidential candidate, Muharrem Ince, made use of several populist statements during his campaign in 2018, while particularly addressing Syrian refugees in Turkey, who he criticized for crossing back to Syria to celebrate the Muslim Eid holiday. Ince stated, “If you can go there, I will not allow you to return back, you should stay over there, my people are unemployed here.” A similar discourse was also adopted by the party’s chairman Kemal Kilicdaroglu during the 2017 referendum campaign, when he compared Turkish soldiers in northern Syria with Syrian refugees that escaped to Turkey.

Unlike global social-democratic notions, Turkey’s main opposition has been targeting Syrian refugees in order to make a use of anti-immigrant sentiment in Turkey.

All in all, it is not the first time that Turkey’s opposition has been targeting Syrian refugees in order to utilize on anti-immigrant sentiment in Turkey. Unlike global social-democratic notions, forms of discrimination and racism are available for CHP circles. This becomes more obvious when no outcry occurs among the electorate as leading party figures regularly target refugees or other people – even investors – from Muslim-majority countries. Under these conditions, Turkey’s main center-left, social-democratic party, has to take a decision and transform its electoral base. Even though there are certain phases in the party’s program concerning a globally accepted stance against refugees in general, the reality among the party’s cadres and its actual mentality does not fit the global expectations and center-left positions.