Despite the civilian government’s determined will and several structural measures, a potential junta within the Turkish Armed Forces must still be taken seriously. 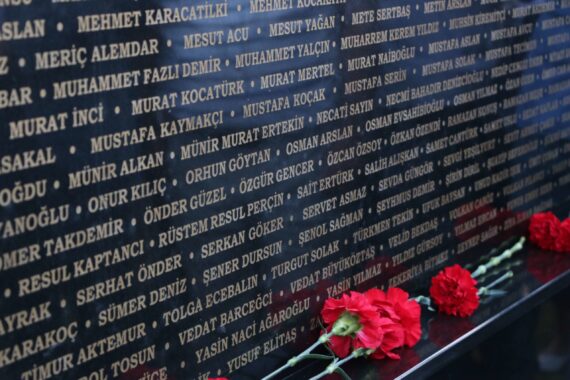 A list of names of people that were killed during the July 15 coup attempt. Anadolu Agency

On Monday, Turkey commemorated the third anniversary of the July 15 coup attempt. As a nation that has faced several military coups and coup attempts in the Republican Era, July 15, 2016, symbolizes a significant milestone regarding civil-military relations and the civilian control of the military on an institutional platform.

In contrast to previous attempts, the 15 July coup attempt was perpetrated by FETO members who infiltrated the Turkish Armed Forces in the last 40 years. Why did they mobilize a coup attempt against Turkey’s democratically elected government? More, how has the subsequent struggle period been conducted, and why did they fail?

Firstly, the main reason as to why the July 15 coup attempt failed is based on the fact that FETO- which symbolizes a certain radical mentality- has no collective support among different social groups in Turkey. This is a fundamental point that might be disregarded by biased experts who still cannot imagine how intense the anger against the group is all over Turkey. In other words, it is very obvious that there is no social base in Turkey having any sympathy for Gulenists anymore.

There is no social base in Turkey, from ideological right to left, having any sympathy for Gulenists anymore.

Besides its own marginal, radical, blinded, and even terrorism-tolerating base, this societal rejection is a fundamental fact across Turkey’s nationalist, secular, conservative, Kemalist and ethnically motivated groups. Consequently, this fact has to be counted as one of the main points that facilitated the collective resistance against the coup attempt during the night of July 15, 2016. By this, it should be reminded that it is not a secret that specific social groups in Turkey had previously supported military coups in the country. In cases of “certain conditions,” when the Turkish military’s specific cadres persuaded some civilian groups, the majority of the country’s media and leading figures of the judiciary, these conditions enabled a military coup. The military men had a higher possibility to execute this illegal activity (a military coup) within a “successful” framework, compared to the failed attempt in 2016.

Building on these facts and the main denial against the FETO criminal cult in general, it has to be stressed that Turkey has had a quite successful development trajectory, particularly during the last 15-20 years. During this period, the belief of the younger generations with regard to civil democracy and the increase of a rather diversified media – in contrast to previous eras where the media obeyed the military-dominated elite – made it possible for tutelage representatives to be elaborated critically.

Another critical point that made it impossible for the putschists to overthrow the civilian government on July 15 was the fact that Turkey’s president called for all citizens to go on the streets and resist against the military coup. Unfortunately, this civilian resistance, which left 250 dead and over 2,000 injured, is not taken into account seriously by particular prejudiced circles mostly represented in the Western world.

The unprecedented civilian resistance against the coup that left 251 dead and over 2,000 injured, is not taken into account by the West.

With regard to the future of civil-military relations in Turkey, while the mindset is changing, this gradual behavioral change ought to be strengthened. The democratic trend of dominating the military by legal civilian representatives has achieved broad acceptance among Turkey’s population. Furthermore, Turkey’s new system of government, which enables and fosters former high-ranked military commanders to enter active politics in a democratic way, will contribute to the civilian control of the military. An example of this is former Chief of General Staff, Hulusi Akar. After quitting his military career in 2018, he was appointed as Turkey’s defense minister in the first presidential cabinet under the new system. In one of his speeches, he underlined that he took the ministerial role in order to contribute to Turkey’s democratization process.

The Turkish Republic has faced serious difficulties in its 96 years, of which has no doubt seen military coups and coup attempts that have left disastrous results. Trials against the July 15 coup plotters are still taking place, and will likely continue for some time. Despite the civilian government’s determined will and several structural measures that have taken place and the change of mindset in Turkey, a potential junta within the Turkish Armed Forces must still be taken seriously. With this, simultaneously, the democratic government and military must continue to be revisited in accordance with Turkey’s constitution and all its related laws.