“If the girls of Dersim had not been given out for adoption, they would have remained in Medieval times. At the homes they were sent to, they were brought up very well, learned to set dinner tables very well” so said, CHP deputy Gülsün Bilgehan Toker. 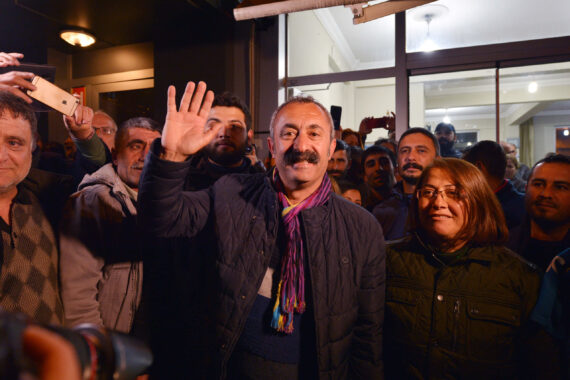 Ovacık, a small district in a far corner of Turkey, has been a popular place all over Turkey since 2014. This is certainly due to the fact that the district mayor has been Turkey’s one and only mayor from the Communist Party. While the word “communist” was accepted as derogatory for years in Turkey, a neighbor of USSR and a NATO ally since 1952, even the honey produced in Ovacık is today called “communist honey” thanks to former Ovacık Mayor Fatih Mehmet Maçoğlu’s performance. Of course, in this context, the word does not refer to an ideology but is rather employed as a symbol, a trademark for the district. Finally, Maçoğlu was elected as the mayor of Tunceli province thanks to his successful performance in Ovacık. He is now the mayor of a city with a population of 90 thousand.

Soon as he was elected Ovacık mayor, Maçoğlu encouraged the production of organic chickpeas, beans and honey in the district, of which the population is around 3 thousand. The products were put up for sale on the municipality’s website through a cooperative formed by the municipality. As Maçoğlu claims, he procured Turkey’s best quality honey that contains 216 thousand different minerals from its producers and marketed it in all 81 provinces of Turkey under the guidance of the municipality. An average of 3 tons of honey was sold per day. Maçoğlu says: “We introduced the natural honey produced on Dersim Mountains, Munzur foothills and highlands as ‘communist honey.’ They are calling from all 81 provinces, including Çanakkale, Trabzon, Rize, Mardin, Isparta and Istanbul, asking ‘Is there any communist honey?’ Even bees got used to us, they’ve become communists!”

While endorsing the CHP’s mayor candidates in the west of Turkey, the HDP pursued propaganda in Tunceli by accusing Maçoğlu of being a Kemalist and a CHP supporter.

After this successful performance, Maçoğlu ran for Tunceli municipality and was elected as the new mayor of Tunceli. Born in 1968 in Ovacık, Maçoğlu is a laboratorian. While working as a health officer in Tunceli State Hospital’s emergency service, he quitted his job and ran for Ovacık municipality. His opponent was the previous mayor Mustafa Sarıgül, who won from the Republican People’s Party (CHP) in the 2009 local election, but eventually passed to the Peace and Democracy Party (the former name of today’s Peoples’ Democratic Party-HDP) by resigning from the CHP in 2013 to protest the party’s approach to the reconciliation process and the constitutional drafting process.

In the latest local election, Maçoğlu’s biggest opponent was an HDP candidate. He became a candidate from the Turkish Communist Party with the endorsement of Socialist Assemblies Federation, while the HDP formed the Revolutionary Force Union by allying with three other parties. The HDP harshly attacked its opponent in Tunceli. According to former CHP deputy Hüseyin Aygün’s tweet before the election, HDP said the following while attacking its opponent: “You are the new trustee of Dersim. You are a Kemalist, your victory will only favor the CHP. Continue your chickpeas-beans communism in Ovacık. You made the headlines in Sözcü (a radical Kemalist newspaper in Turkey). You are a Kemalist, not a communist. AK Party (the ruling Justice and Development Party) will win if you run for the election.” While endorsing the CHP’s mayor candidates in the west of Turkey, the HDP pursued propaganda in Tunceli by accusing Maçoğlu of being a Kemalist and a CHP supporter. Despite all, the party failed to sabotage the popular support Maçoğlu enjoys.

When Maçoğlu was elected as mayor on the night of March 31, he tweeted “People of Dersim have won.” If you ask why he articulated the former name of the province instead of saying Tunceli, or why the HDP accused him of being a Kemalist and CHP supporter as if they were insults, the answers are long. But to answer briefly, CHP changed Dersim’s name as Tunceli in 1935, where the majority of the population are Kurdish and Alevi. This change was announced as: “The last seedbed of feudalism is being removed. As in every corner of Turkish community, a new spirit of civilization and progress will prevail in Tunceli from now on.” Just as the West named its colonial practices beginning from the 19th century as a “civilizing mission,” the Kemalist ideology in Turkey undertook a similar “mission” that can be characterized as social engineering.

When Maçoğlu was elected as mayor on the night of March 31, he tweeted “People of Dersim have won.” Saying Dersim instead of Tunceli had deeper historical connotations.

Since the rulers of the Kemalist ideology borrowed their body of knowledge from the West, they attempted to shape society with a “civilizing mission” in a self-orientalist reflex. When things did not go as they wished, they “civilized” people by using force. The operation that claimed more than 13 thousand lives in Dersim about 81 years ago (around 1937-38) was also considered a civilizing mission. Aside from all the casualties, leaders of 5 tribes, including Seyit Rıza, were executed; while the surviving girls were given out for adoption by the state. In 1927 and 1935, censuses were conducted in Dersim. So, according to the archives collected by Necmettin Sahir Sılan, who was a bureaucrat at the time, the state used to know all the details about the population in Dersim. Dersim sent a total of 6 deputies to the First Parliament that fought the national war of independence. Sabiha Gökçen, Kemal Atatürk’s adopted daughter and the first female fighter pilot of Turkey, was also among the leading names of the Dersim operation.

And one day in 2011, the “Dersim incident,” described as “the secret everybody knows about,” was confronted as part of Turkey’s collective memory. Then Prime Minister Recep Tayyip Erdoğan said: “If an apology is needed on behalf of the state, I apologize,” and urged CHP Chair Kemal Kılıçdaroğlu to apologize on behalf of his party, which was ruling Turkey at the time. However, upon a question on the subject during a university talk, Kılıçdaroğlu said: “I don’t think this incident must be remembered as the darkest tragedy of the Republican history.” During those days, CHP deputy Gülsün Bilgehan Toker, the granddaughter of late İsmet İnönü, gave a response that put CHP ideology in a nutshell: “If the girls of Dersim had not been given out for adoption, they would have remained in Medieval times. At the homes they were sent to, they were brought up very well, learned to set dinner tables very well,” and added: “The current chairman of the CHP was born and raised in Dersim, which is the biggest success of the Republic.”